In a few days I’m heading out East to visit three and a quarter Pagan Festivals (one of them is just a day thing so it counts as a quarter). I’ll be gone from my house for over a month and will probably return home with a soar back and smelling of patchouli. The idea of hitting the road for such an extended trek is exhilarating (I’m on tour!) and frightening (what if I don’t sell enough books to eat?). The exhilaration is mostly overpowering the fear but that might change when I see my bags all packed up and ready to go by the front door on Sunday night.

I love Pagan Festivals, and I find them to be some of the few places I can be 100% Pagan without fear of repercussion. I don’t live in the broom closet or anything, but like most of us, I live in mundania 23/6. Outdoor Pagan Festivals are a chance to experience my faith 24/7. I love indoor festivals (hot water! easy access to food! beds!) but those festivals always exist with one foot outside of Pagandom. There are no bonfires, drum beats echo off of walls instead of floating into the sky, and people wear clothes; the illusion of being separated from normal existence is easily disrupted. Being outdoors at a Pagan Festival run by Pagans, organized by Pagans, catering almost exclusively to Pagans on land owned by Pagans is a far more immersive Pagan experience. Until the Hilton family tells us of their hereditary Witch tradition, I feel pretty comfortable not thinking of them as Pagans. 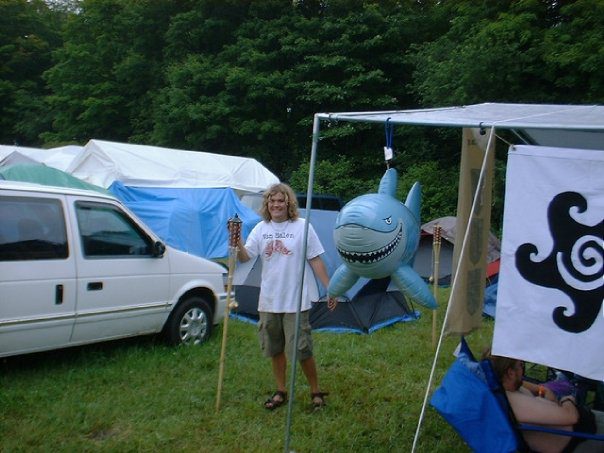 Me at festival preparing for something.

Before anyone thinks that I’ve just bad mouthed indoor festivals I should point out that comparing indoor Pagan Festivals to outdoor ones is like comparing apples and oranges. They are completely different monsters. At an outdoor festival wanting to take a shower might result in a half mile walk. At some outdoor festivals I’ve been known to wait in line ten minutes just to use a flushing toilet. Outdoor festivals can be extremely difficult for people with health problems (though they are getting better and better about that as they build infrastructure). Indoor festivals are prohibitively more expensive if you live out of town, and that has nothing to do with the cost of a festival and everything to do with spending one hundred dollars a night on a hotel. You can visit an outdoor festival for five or six days and spend 150 bucks, everything included except for food. They really are different and I love both for different reasons, but being outside I think I feel more “Pagan;” your experiences may differ, especially if you hate camping.

In many ways Pagan Festivals are an idealized slice of Paganana. A lot of us want to go to sleep at night to the sound of drums in the distance. We want a world full of music and ritual, and we want to feel free to talk about our Craft. One of my favorite things about festivals are the conversations. It’s pretty awesome when you can sit between Peg Aloi and Lilith Dorsey and engage in random chit-chat. I love my house and my neighborhood but those opportunities just don’t come up here in Sunnyvale.

Pagan Festivals are a very equalizing experience too. It’s hard to be a prima donna when you are shitting in the same port-a-john as everyone else. Perhaps it’s a reflection of Paganism’s “newness” but our teachers and low-level celebrities remain easily accessible. It’s hard to imagine Pope Benedict having a beer with his flock at CatholicFest, but I’ve been privileged enough to have dinner with Selena Fox and and to share a drink with Christopher Penczak. I feel like I’m playing “random name drop” here, but that’s not it all. It’s just how the festival experience is. I’m not anybody special, the point is that anyone can share time with most of these folks. I can’t think of any other faith community where the people who have helped shape it remain so easily available.

Over the next few weeks I’ll be documenting my festival experiences, hopefully offering some insight as to why people go to Pagan Festivals and why those that go love them so much. Have no fear, I don’t plan on turning this blog into a boring travelogue (I’m rather sure you don’t care what I had for dinner) or anything along those lines. I want to write about what makes the Pagan Festival experience unique, and what those experiences offer to the rest of our larger community. Most Pagans don’t go to large outdoor festivals, but because festivals have a “viral effect,” they are influenced by them. For decades festivals probably functioned as the first Pagan Internet, a place where songs and chants were exchanged and then shared nationwide. The actual internet has probably lessened this effect, but words on a page can never truly replicate the feeling and emotion in a ritual or express the rhythm in a song or chant.

Festivals are multi-faceted Pagan worlds. For many people they are about workshops, presentations, and rituals. Many gatherings offer quite the educational experience, and feature some amazing folks both published and unpublished.* Music is a huge part of the festival experience, and the Pagan community is blessed to have a lot of very talented musicians, song-writers, and singers. Nightly drum circles are often the highlight for a lot of folks, with drumming and dancing until literally dawn. It’s never been my cup of tea, but the energy is always good and I can see the appeal. The festival experience offers a wide-range of topics to write about, and I’m excited to get that opportunity.

So over the next month, look forward to lots of posts nominally related to my upcoming trip. Hopefully we’ll get some good author interviews in, talk to some musicians, and walk down some tangent filled roads. I look at Raise the Horns as a kind of magazine, so there will also be articles totally unrelated to my trip in the upcoming weeks. So this space will be more than just me waxing eloquently about the joy of flushing toilets, stay tuned.

For those of you curious about what festivals I’ll be visiting my itinerary is below. If our paths cross, be sure to stop by and say hello. Let the shameless self-promoting begin!

*While authors tend to attract the big crowds, some of my favorite presenters over the years tend to fly more under the radar. At a Starwood several years ago one of my friends came back to camp raving about a workshop by Taliesin Govannon. My friend is a pretty well travelled Pagan too, he’s seen a lot of workshops and stuff, so I respect his opinion. I think my friend’s exact words where “Oh my god, this guy was better than you Jason.” I’m still not sure if I should be offended by that comment or if I should take it a compliment.

June 17, 2012 The Strange Triumph of Cernunnos over Pan
Recent Comments
0 | Leave a Comment
""Different world views mean more than different ways of practicing, and they often encompass completely ..."
Falkenna The Promise and Peril of “Pagan”
"I use the word Pagan because in my community its safer than Witch. I don't ..."
Michelle Gillian The Promise and Peril of “Pagan”
"Loosing friends is indeed a long term grief."
Opens Heart Lessons Learned: Ten Years at Patheos ..."
"Don't forget peeling an apple in one strand to toss it over your shoulder to ..."
Wolf Samhain is What You Make of ..."
Browse Our Archives
Related posts from Raise the Horns