The Strange Triumph of Cernunnos over Pan

If you’ve ever read the book Triumph of the Moon by Ronald Hutton you are probably familiar with a chapter in it called “Finding a God.” Hutton’s argument there is that the Horned God became “the god” of Modern Paganism due to the popularity of the Greek God Pan with early 19th Century English Poets. As a devotee of the Horned One, I think Hutton’s hypothesis is absolutely spot on. The language we use to describe the Horned God bears a striking resemblance to the poetry of Keats, Shelley, and others. It’s true that it sometimes mirrors a few Renaissance-era writers, but those English poets are the ones who put Pan into the mainstream of English literature.

Given Pan’s prominence in literature (The Wind in the Willows) and art, you’d think that it would have all swung Pan’s way, but it didn’t. Now I’m not arguing that Pan is a forgotten deity, that’s certainly not true. We Panheads are legion; but the throne Pan once seemed so likely to sit on (or hump) is generally occupied by Cernunnos.

I love Pan, but most general Pagan Horned God images via statues or t-shirts don’t look like this.

Cernunnos is an enigma. There are many images of him but no stories or myths. Can you name a Cernunnos tale that you read in elementary school? If you can, you are an incredible person, because none exist, unless they’ve been written relatively recently. Can you recite a few lines from your favorite Cernunnos poem? Maybe something from the 19th Century that you were forced to read in high school? Again, you can’t, because they don’t exist.

Now those myths and stories and poems are there for Pan. I’ve been reading Pan mythology since the second grade. I was familiar with Pan and Syrinx before I read a Judy Blume book. Pan shows up countless times in 19th Century literature, eventually owning the century and its poets; becoming one of the most written about deities in all of English literature. Most of us were forced to read Pan in High School, he shows up in Wordsworth, Keats, Shelley, and numerous other poets. Pan was a rock star (on and off) for nearly 2500 years, Cernunnos wasn’t written about with any regularity until the 1930’s.

If there’s one person responsible for the ascension of Cernunnos it’s probably Margaret Murray in 1931. Murray’s inclusion of Cernunnos in her book The God of the Witches was definitely a turning point. In the first chapter of Witches Murray weaves together 15,000 years of horned god iconography and myths and turns it into one Horned God. Though she doesn’t single Cernunnos out for any special treatment (she mentions Pan a lot too), she does make him the starting point for the Herne the Hunter* folk-tale and turns Herne into a full-fledged god.

The problem with lumping Pan and Cernunnos together as one “Universal Horned God” is that they are extremely different deities. Cernunnos was not the sexual being that Pan was; there are no pictures featuring Cernunnos with an erect phallus. Cernunnos is usually depicted in a sitting position with legs crossed (we called this “Indian Style” at my elementary school), even if he did have a boner we wouldn’t be able to see it. This position was one Celtic hunters often used because it’s easy to get up from, so it’s probably safe to say that Cernunnos is a god of hunting. Cernunnos is often pictured with a torque and large bags of money on his person, cash and a symbol of royalty are a far cry from the drinking shepherd that was (and is) Pan. These are two entirely different types of gods. 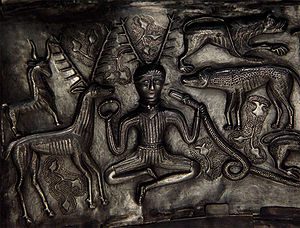 Cernunnos on the Gundestrop Cauldron, a Celtic cauldron made in Thrace found in a peat-bog in Denmark.

Since Modern Witchcraft is a British Religion there are some practical reasons for the ascension of Cernunnos. While he’s not “English” and depictions of him in the British Isles are lacking (perhaps just six or seven, and even then whether it’s the god generally depicted in Gaul is up for debate), Murray made him English. Linking him directly to Herne suddenly gave him a British pedigree, and Celts did live in Britain, so even if there’s not a lot of evidence for his worship in Great Britain, it’s at least possible. Pan, despite the love many English poets felt for him, was Greek, perhaps the worship of Cernunnos over Pan was a matter of national pride?

Cernunnos has other advantages too, not just his nationality. He’s a blank slate; he can be about anything you want him to be since there’s no back-story. No one can point out his foibles or his rapes, unlike Pan. For someone like me who is obsessed with figuring out how my gods were worshipped in ancient times, Cernunnos is a problem. For the majority of people who don’t care about such things he has a lot of advantages. It becomes impossible for someone to tell you “you are worshipping him wrong**,” since no one knows how he was worshipped.

As a piece of iconography he has some distinct advantages over Pan. Cernunnos more easily fits the modern “Horned God” archetype, which has evolved into a strong, virile, middle aged man with horns on his head, generally those of a stag or deer. With Pan you get the baggage of the 24/7 boner and the goat legs. While the goat legs aren’t a problem on the cover of a book, the raging hard-on is, advantage Cernunnos.

Society at large also has “Pan issues.” Since Pan has been used as a “Devil” figure for the past several hundred years he sometimes comes with pre-conceived notions. While Modern Pagans don’t make the mistake of Pan=The Christian Devil, the public’s knowledge of Greek Mythology and religion in general is not what it should be, and Pan=Devil has become a shortcut to thinking in our society. While horns aren’t universally loved, they aren’t quite as feared as goat legs.

Cernunnos has emerged as a powerful symbol over the past 80 years, becoming the most recognized Horned God in Modern Paganism. Even those who don’t worship him by name generally honor a “Horned God Archetype” made more in his image than Pan’s. While Pan’s place in 19th Century literature created the woodland ideal of the Horned God most of us know so well, Cernunnos often ended up as the cover model.

*While worshipped as a deity in Modern Paganism, the earliest tales of Herne were more akin to ghost stories than mythology. If Herne has his origins within Pagan Gods, it’s more probable that his “father” was Odin/Woden than Cernunnos. Herne himself had a good shot at being “the” Horned God of Paganism. In The Meaning of Witchcraft Gerald Gardner calls Herne “the British example par excellence of a surviving tradition of the Old God of the Witches.” Since Herne and Cernunnos are so easily interchanged by man, it’s quite likely that this par excellence has also been shared with Cernunnos.

**That doesn’t stop me from trying though.

June 25, 2012 Ramble On: Wisteria Summer Solstice
Recent Comments
0 | Leave a Comment
""Different world views mean more than different ways of practicing, and they often encompass completely ..."
Falkenna The Promise and Peril of “Pagan”
"I use the word Pagan because in my community its safer than Witch. I don't ..."
Michelle Gillian The Promise and Peril of “Pagan”
"Loosing friends is indeed a long term grief."
Opens Heart Lessons Learned: Ten Years at Patheos ..."
"Don't forget peeling an apple in one strand to toss it over your shoulder to ..."
Wolf Samhain is What You Make of ..."
Browse Our Archives
Related posts from Raise the Horns