When I first set out on the Pagan Path I found rapture in the Goddess. She was all and everything, and my worship of Her was all encompassing. While the books I was reading at the time made reference to “The God,” I was mostly oblivious to Him. My prayers at night were dedicated to “The Triple Goddess” and when I heard a voice upon the wind it always belonged to Her.

I don’t think such early experiences are unique. The Goddess is what makes Modern Paganism different from most other Western religions.* It’s always easy to get caught up on in the “new” and worshipping the Divine Feminine was certainly new to me. This next bit sounds a bit silly, but “she hugged me.” I had never felt deity so close before, and I didn’t want her to ever let go. My first Pagan year was all about Her, and I don’t think I uttered a word to any other deity. 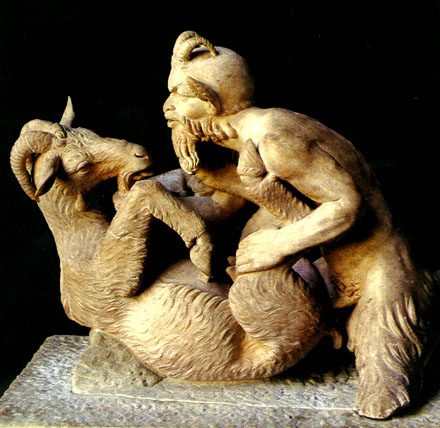 Never in a million years did I imagine that this guy would be the deity I most identify with.

As I grew as a Pagan I got to the point where I felt the need to add a male deity to my worship, though he would be forced to sit in the backseat as I rode shotgun with The Goddess. After a little thought and consideration I decided that “The Lord of the Sun” would be my god. I pictured a god much like Apollo in my mind, someone best known in the noonday sun; a being of brightness and light. He was a composite of Lugh, Mithra, Sol Invictus, Helios, and Ra. I would celebrate Him during the day and Her at night. She was the moon, He was the sun, it all made sense in my mind, but I never felt anything in my heart. 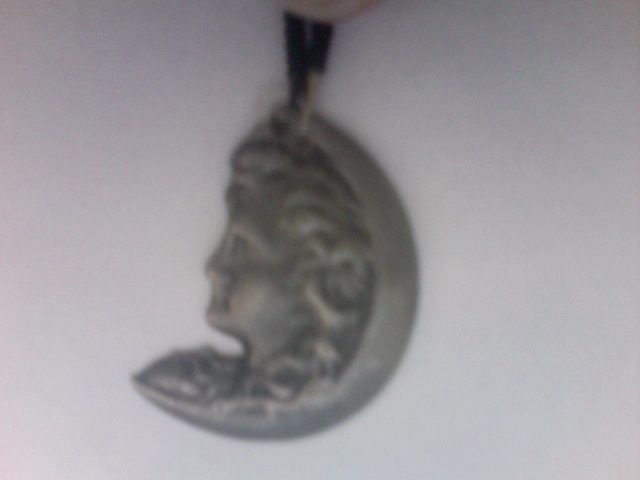 I didn’t wear a pentacle after first embracing The Goddess, it was this charm.

Relationships with deity are odd things. Your best friend might be totally devoted to Isis, yet you’ve never heard a peep from her. It might make perfect sense for you to worship Herne, but he’s always remained silent when you call. I was blonde, I loved the sunshine; the Lord of the Sun seemed tailor made for me, but sometimes things don’t work out like we expect them to. I would call, but he never answered. It never felt like a rejection, there was just a void there, the exact opposite of how I felt when I called to the Goddess.

From the moment I first called upon Her, she filled a hole in my heart. I remember my first prayer to Her, my first utterance of Her name as an adult, and the power and magick it brought into my life. My Grandmother taught me to pray nightly as a boy, and it’s a habit I’ve always maintained. That night, my first night with Her, I changed the deity I called out to in that prayer and when I did I felt this amazing rush of energy. Power, old and ancient, rushed through me, it was one of those amazing “real experiences” that we all get as Pagans from time to time. It was life-changing, and my heart felt like it was home. That rush of energy never came to me when I called the Lord of the Sun.

I knew that there was another aspect of The God that I could call upon since the Sun was silent, but I didn’t want to go that route. I’m sure a lot of it was due to my “Christian Conditioning” but I wanted nothing to do with the Horned God. The association between horns and the Devil was still in fresh in my mind, I wasn’t ready for that sort of deity, not yet anyways. There are lots of different kinds of Pagans. Some of them are more comfortable in black, and some of them are more comfortable in tie-dye. At the time, I was a tie-dye kind of guy. Worshipping the Horned God felt like it would require me to embrace a darker side of Paganism**, and I didn’t want that.

I spent the next year like this, reveling in my relationship with the Goddess, and paying lip-service to a God that didn’t want anything to do with me. This all sounds rather bitter, but those were wonderful years for me as a Pagan. I may not have known what I was doing and I might have only been dealing with one side of the equation, but everything around me seemed so magickal. I remember collecting rain water in the middle of a giant thunderstorm (why? I’m not really sure why, but I did it anyways) and taking long walks in the Lady’s silvery moonlight. It didn’t feel like anything was missing from my spiritual life, but sometimes I’d look over my shoulder and wonder. It always felt like something was there, watching me, just out of sight in the shadows.

This feeling of something watching me grew over the next few months. Sometimes the feeling was subtle and sometimes it was insistent, demanding, and nearly maddening. One day still stands out in my mind during that period of time. It was March, and I was walking up the steps to my front door when something caught my eyes in the scrubby bushes in front of my glassed-in porch. I stopped to look and I swear to this day that I saw eyes in those bushes, and a face-the face of Pan. Not knowing what to do I simply rushed inside my house and proceeded to lock myself in my bedroom for the next two hours, scared half to death that this “thing” was happening to me.

I remember flipping through a book that night and seeing something like the picture below. I looked at it and all I could think was “no, no, no, no, this is not me!” I began to wonder if my “playing at Paganism” was beginning to catch up with me; that I was coming to some sort of cosmic accounting where I was destined to end up with a demon. I don’t remember crying that night, but I remember being upset, and frightened, at least until She comforted me. 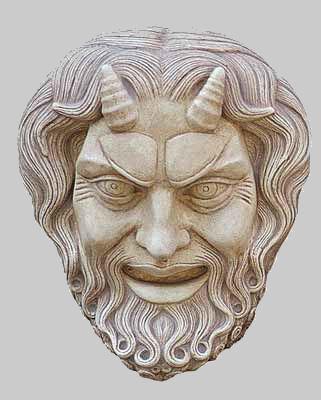 I’ll admit it, Pan scared me for a long while.

The next morning Pan was still there in my bushes, and I had no doubt it was Pan. I might have been worshipping “The Lady” back then, but I knew instantly that whatever was in my bushes was no archetypal deity. It was most certainly a rather specific Greek god, a god that was a very long way from home. I moved quickly down my steps that morning, trying to get away from whatever was in my bushes ASAP. Of course he was still there that afternoon, and that night, and the next morning, and for days really. There were even a few times I think he knocked on the door (and I’m not making that up), but I didn’t answer.

Knowing a great deal about Pan now, all of this is pretty consistent with His character. When I talk about Pan at festivals and workshops I often describe Him as “urgent.” When he gets excited sexually it becomes a “need” and not a “want.” He’s not a god of patience or composure, he’s a deity who lives in the now. When he wants someone to acknowledge him he just shows up and bangs on the front door until someone answers.

As Pan began his camp-out I began to hear his name hum and buzz around in my head. In the middle of ritual I’d hear this rhythmic “Pan! Pan! Pan! Pan!” inside my brain, the sound of the word just clamoring to get past my lips. All the Pagan books I read during this period seemed to feature Pan (or some other horned god) in them, and I’d run into his image in even the most mundane places. For several months I managed to keep this all in check, and refrained from saying his name out loud, but it kept getting harder and harder to do.

At an outdoor ritual that year everyone in the circle was invited to say the name of whatever particular goddess or god they worshipped. Suddenly the steady tattoo of “Pan! Pan! Pan!” in my brain got even louder, and I felt an energy swell up in my chest. Before I had time to even really think about it I yelled “PAN” as loudly as I possibly could, and that rush of energy I felt the first night I worshipped the Goddess entered into me. At that moment I felt utterly complete on a spiritual level, I was His and He was mine.

Pan. What else is there to say?

From that moment on there’s never been any question about what deity is most prominent in my life, it became Pan above all else. The Lady never went away (though these days I call her Aphrodite), but it was Pan who became my teacher and confidant. Her love still warms my heart, but it would be Pan (and The Horned God) that I felt most called to serve. Over the years He’s introduced me to other horned and horny gods, and I’ve developed relationships with those deities as well, but it will probably always be Pan who figures most prominently in my spiritual hierarchy.

To this day I’m still not sure that I ever found The God, it’s more like he found me.

*I’ve heard lots of arguments over the years about the “Divine Feminine” being a part of Christianity, but I’ve never bought it. You can shout all you want that Yahweh is gender neutral, but he has been written about as male for so long that it’s impossible to picture him any other way. Besides, I don’t want a gender neutral god, I want a Goddess. The same goes for the idea that the Holy Spirit is feminine. Catholics have their Virgin Mary, but in my mind she’s sacrificed so much of what makes her a woman that she’s become un-relatable.

**Important to remember that this is my “Baby Pagan” stage, I had a lot of growing and learning yet to do. 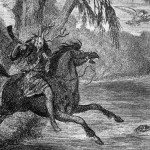 August 10, 2012 Faces of the Horned God: Herne the Hunter
Recent Comments
0 | Leave a Comment
Browse Our Archives
Follow Us!