Whither the Word Witch 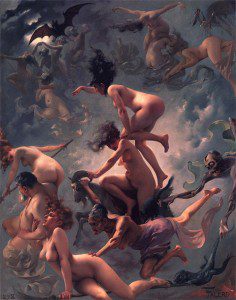 A friend of mine sent me a message the other day conveying outrage over the use of the word “witch” in the movie Hansel and Gretel: Witch Hunters. She was upset because Hollywood would never dare make a movie called Hansel and Gretel: Christian Hunters, so why was it OK to hunt witches? I certainly hope we are free and clear of witch hunts in 2013, but I can’t find it in myself to get upset over the use of the word witch in (what I assume is) a bad movie. (It was dumped on the public in January, usually that’s all I need to know about a film.)

For the record, I love the word Witch. Like many other folks, I find it empowering, but I reserve its use for special occasions. In ritual I think of it sort of like Dave’s Insanity Sauce*, a few well placed drops are all that’s needed. When I want to elicit a shiver and connect with a ritual uppercut I bring out the W word. It’s also a word I use to describe myself and my own practice. I’m a Pagan who practices Witchcraft and I’m damn proud of that, but witch is a problematic word, perhaps even more so than Pagan, and that’s saying a lot.

The reason I can’t get upset about the title Hansel and Gretel: Witch Hunters, is because “witch” has several definitions. For most people the word witch means what it always has “one that is credited with usually malignant supernatural powers; especially : a woman practicing usually black witchcraft often with the aid of a devil or familiar” (from Merriam-Webster). That definition doesn’t match-up with anyone I know who calls themselves a witch, but it’s the definition that most of the English speaking world has been using for centuries. 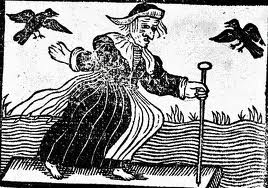 Until relatively recently, the word witch was nearly always used in a negative context. Witches were people who worked negative magic. The word witch usually didn’t signify a religious practice, it simply meant “bad magic user, usually female. These are the witches of fairy-tales, and some elements of pop culture. Witch is not necessarily a synonym for “magic user” either, the “negative magic” part is essential for understanding how the word witch was (and still is in some contexts) used.

A lot of folks suffer under the misconception that magic went away in the English speaking world until the formation of the Golden Dawn. Nothing could be further from the truth. Throughout the Middle Ages, the Renaissance, and even now all kinds of people were (and are) using magic. Early 19th Century magic users, for example, would have never thought of themselves as witches. In fact they used their magic to oppose witches. You can find examples of this in the Renaissance too. Magic was not inherently bad, but witches were people (and often supernatural specter-like entities) who made it bad. In Voodoo and Hoodoo traditions this was also true, witchcraft was nearly always thought of as a negative.

There were certainly a lot of Christians who found the use of anything magical to be a form of “witchcraft” and indeed, even today anything that people don’t understand or are fearful of sometimes gets labeled as witchcraft. (I can’t help but think of Ricky Bobby from the movie Talladega Nights screaming “Tom Cruise, help me with your witchcraft!”) Christians who used magic thought of themselves as Christians who used magic. It was just another tool in the toolbox, magic and religion were separate things.

The word began to take on more romantic connotations in the late 19th Century, with that process really picking up steam after the publication of Margaret Murray’s Witch Cult in Western Europe in 1921. Murray turned witchcraft into Witchcraft; it wasn’t just a term for negative magic (or Satan worship) but for a religion, and Murray’s Witch Religion was something that a lot of people found appealing. (For the record, a lot of Murray’s ideas were borrowed from Jules Michelet’s La Sorcière.) Murray’s book provided the impetus for people to want to call themselves Witches in the 20th Century. 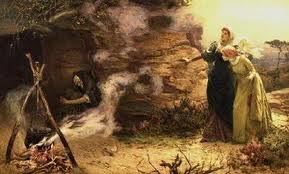 My argument that Murray (and a few others) began the use of the word “Witch” in a religious context doesn’t mean that I necessarily doubt the “oldness” of some Modern Pagan traditions, it just means that I don’t think the people practicing those things would have thought of themselves as witches. Magical practices are extremely resilient, and certainly could have been passed down in families for generations (and you can see this with some centuries old cunningcraft books), but use of magic doesn’t mean someone self identifies as a witch. That’s an important distinction to remember.

In the 1950’s Gerald Gardner began to use the word Witchcraft to describe Wiccan religion (or as Gardner spelled it in those early days, Wica). Though it’s hard to be certain how much Gardner actually believed in deities, I feel comfortable in my belief that Gardner was using the word Witchcraft to describe a religious practice. The books are called Witchcraft Today (1954) and The Meaning of Witchcraft (1959), and they aren’t spell books. Gardner’s version** of Witchcraft is a practice and a faith. As an initiated Gardnarian Witch I think of what I do as a religious practice. 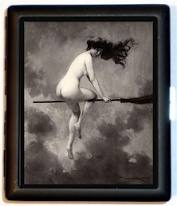 I bring this up because I often run into people who get upset when Witch is used as a synonym for Wiccan. What I do falls under the umbrella of British Traditional Witchcraft, and in my practice I use Wicca and Witchcraft to mean the same thing. As language is a living thing, I do believe that the word witch is evolving to mean “empowered magic user” in many circles. Pop culture is full of beautiful young women practicing magic and calling themselves witches. It almost always seems void of a religious center (though a lot of the trappings do resemble things we see in Modern Witchcraft the religion), but that’s fine. I know people who call themselves Christian Witches because they’ve begun to associate the use of positive magic with the word witch while still going to church, etc. I’m sure we all know kitchen witches too, people who seem to put magic into everything they touch, definitely witches too.

Words are capable of several different definitions, and the dictionary I quoted earlier contains about five. When using the word witch I try to be careful about speaking in absolutes (and this comes up often in my writing and speaking). When someone tells me that “Witch” and “Wiccan” aren’t synonyms they can both be right and wrong. If I choose to use them that way I feel completely justified in doing so, as they are synonyms in my own personal practice. I also realize that not everyone uses the word witch exactly like I do, which is completely fine. I don’t own the definition of the word anymore than you do. I’m perfectly comfortable with a word having multiple meanings, and I’m reasonably certain that we are all smart enough to understand the context.

That brings me back to Hansel and Gretel: Witch Hunters. Words have multiple meanings and the “witches” being hunted by Hansel and Gretel aren’t the witches that make up my community. Now if Hansel and Gretel were to start hunting goddess worshippers who aren’t out to hurt anyone, then we would have a problem. At that point they are attacking a particular religious belief system and that’s certainly bollocks. With the word witch many of us are embracing a word with centuries of tradition and baggage behind it. We cherish it because we find it empowers and speaks to us, but you have to accept the good with the bad. No one is trying to tar and feather Modern Witchcraft, they are just using a definition of the word witch that’s been around long before we were on the scene.

*Not a paid endorsement, though I do like the hot sauce.

**I write that very much with the belief that Gardner was initiated into something in 1939. 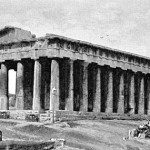 January 29, 2013
Refusing to Paint With Broad Strokes
Next Post

February 5, 2013 My Gods are Gay, My Gods are Straight (And Everything in Between)
Recent Comments
0 | Leave a Comment
"Re: #32, that fictional book is the Necronomicon; you missed a syllable."
Doug Edwards More Witchcraft & Pagan Trivia
"Castañeda invented the character of don Juan, but he was getting his information from Yaqui ..."
Michel America’s Most Important Occultist(s)
"Than isnt the correct Welsh pronunciation. its more like 'Mabb - on', with short syllables. ..."
linguliformean Mabon: The Most Pressing Issue of ..."
"Oh my goddess your article had me laughing out loud, I really never gave much ..."
Deb Lee Mabon: The Most Pressing Issue of ..."
Browse Our Archives
get the latest updates from
Raise the Horns
and the Patheos
Pagan
Channel
POPULAR AT PATHEOS Pagan
1

5 Things I Had to Unlearn...
John Beckett
Related posts from Raise the Horns