My Gods are Gay, My Gods are Straight (And Everything in Between) February 5, 2013 Jason Mankey 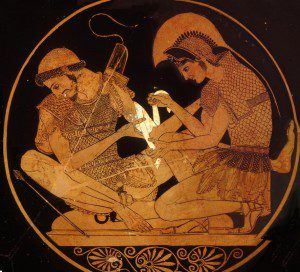 I like to think of myself as a polytheist, but the truth is I kind of waffle back and forth between hard polytheism and half-assed Neo-Platonism. I believe in the gods as separate beings, but I also think of them as connected to something larger. That doesn’t mean that I think all horned gods are a part of one archetypal Horned God (Pan is not Herne), just that there’s a divine providence behind everything. In ritual I go back and forth between calling specific deity, to using the more generic Lord and Lady. Regardless of what theology my brian conjures up, there’s one thing I’m sure of; my gods are gay, straight, and everything in between.

The polytheist in me has long worshipped a god who has had as many dalliances with men (and possibly sheep) as he has with women. Pan is gay and Pan is straight, and as the inventor of masturbation I think Pan might also be in love with himself. While the mythology we learn in school and see in popular volumes (like Bullfinch) always tends to focus on Pan chasing nymphs, he chased guys too and it’s great. Pan is raw sexuality in all of its forms, and he doesn’t give a damn about what team you are playing on (unless, perhaps, you are on team celibate). Pan has been a muse to gay poets and I have to assume that my wife finds him sexy since we are still married. Like the amazing god he is, he plays many roles. Pan is not alone either, there are plenty of bi, gay, and lesbian deities, and that link is just the tip of the iceberg. 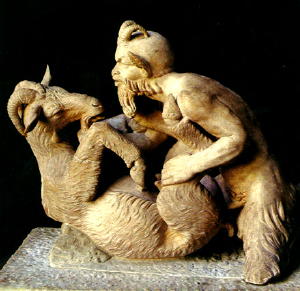 When embracing the composite Lord and Lady, I imagine the two of them as nearly everything. They are the fountain, the source of all things, all is an echo of the Lord and Lady. That means She embraces all aspects of being a woman. She is every color, every age, and every sexuality. Any way a woman is, the Lady is as well. The same goes for The God, and this of course means that both can also be transgendered on occasion. My gods are infinite, especially awe inspiring when some people interpret their deities as being petty and focused on ways of excluding people instead of bringing them in.

I love that my gods aren’t strangely remote. In their myths they have human-type experiences. They love, they screw, they argue, they cry, and they hurt. That my gods have a sexuality means that they might possibly understand sexuality. I don’t know how you expect deity to honor physical intimacy when your god doesn’t engage in it. My gay friends can pray to Dionysus about their relationships because he’s been there. It’s hard to imagine asking Yahweh for relationship advice, heck considering the way he treated his kid I’d be hesitant to ask for parenting advice.

I also believe that the gods aren’t changeless, meaning they adapt to our society. I’ve argued before that I don’t believe the gods care about politics, but I do feel as if they care about how they interact with us on a personal level. Not to get bogged down in theology, but I think the gods change. In the early 19th Century the literary embargo on Pan was lifted, and he found himself adored and honored by Romantic and Victorian poets alike. Much of their work changed how we see Pan, I’d even go so far as to say it changed Pan on the deity scale. He became Pan, the god of all, protector of the countryside. Much of the language used to describe Pan 100 years ago is the language we use to describe him and “The Horned God” today. 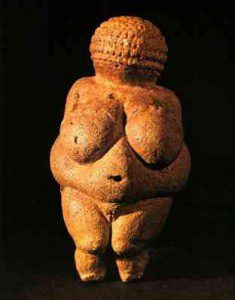 Pagan gods truly live, and those of us who believe, have experiences with them. The gods and the Modern Pagan religions that revolve around them aren’t frozen in time. I’m proud to be a Modern Pagan because my faith reflects the world as it now, and isn’t limited by some interpretation of deity from 2000 years ago. Certainly it’s useful to know how a god was worshipped in antiquity, and that information can only help us to grow closer to deity, but we aren’t locked into some sort of holding pattern. I certainly don’t worship Pan like the Ancient Greeks did. There are no grottos in my backyard and I have no male goats with genitalia intact to sacrifice; ancient god, modern practice.

The gods live and our traditions breathe, and probably best of all we lack “the book.” Certainly there are rules within many Modern Pagan traditions, and rituals and rites designed to be enacted a certain way, but there’s no ancient rule book full of bias and ignorance. Yahweh, his son, and many of their followers still seem to inhabit the year zero sometimes, unable to truly adapt to the modern era. I’m not ever going to claim that my faith is superior to anyone else’s, but I think it does more accurately reflect today than many others, even if much of it is an attempt to recreate a romanticized past.

Because my gods are both gay and straight and live in the present, I feel very strongly about gay marriage. Gay marriage is not just a political issue to me, it’s a spiritual one. When a blogger here on Patheos writes that gay marriage “leads to destruction!” there’s a part of me that gets sick due to the homophobia, and another part of me that pities his god for being so small. My gods embrace the world, and are a part of this world. Denying gay rights would be like denying the gods themselves.

My gods are both gay and straight, and everything in between. Their understanding is not limited to just one aspect of sexuality. My gods are powerful because they are inclusive.

*I almost wrote “Because the gods can be both gay and straight,” but that just felt presumptuous. My gods are my gods, they may not necessarily be yours, and we might have radically different interpretations of them.

February 7, 2013 Ramble On: ConVocation & PantheaCon
Recent Comments
0 | Leave a Comment
Browse Our Archives
get the latest updates from
Raise the Horns
and the Patheos
Pagan
Channel
POPULAR AT PATHEOS Pagan
1