(I apologize in advance for my thoughts being rather disjointed today. As I’m unpacking from one Pagan festival I’m preparing to visit another one tomorrow. My brain is abuzz and my life is a bit of a blur right now, which is why there are at least three different ideas roaming around this piece.)

For the last five days I’ve been at the PantheaCon Festival surrounded by other Pagans. Pcon is a bit like Pagan Fantasy Land, it’s a chance for two thousand people to let their pentacles dangle freely and attach animal tails to their kilts*. Even the hotel staff seems to like us, and it makes me feel as if we are moving that much closer to some sort of broader public acceptance. That feeling drifted away on Monday morning when I began seeing a series of tweets and Facebook posts about something that happened on Fox and Frieds earlier in the day.

That someone on Fox and Friends said something stupid is not surprising, the hosts of that show aren’t rocket scientists, and certainly not journalists. It’s a morning collection of idiots reciting talking points and blathering on about things they don’t understand. Unfortunately for us, Monday’s subject was Paganism, with Wicca mentioned specifically. The segment in question is an ocean of misinformation woven around misplaced political outrage and “woe is me no one loves Christianity” bullshit. At one point bow-tied weasel Tucker Carlson tried to argue that there were more Zoroastrians in the United States than Pagans. As is usual for Carlson’s oxygen deprived brain (the bow-tie perhaps?) the lights were on but no one was home. There are only about 190,000 Zoroastrians left in the entire world and at least a million of us in the United States alone.

(Updated to note that Tucker Carlson apologized publicly on Twitter: “To Wiccans and pagans: Sorry for my pointlessly nasty remarks. Your holidays still confuse me, but you seem like nice people.” I’m still not a fan of the guy, but he didn’t have to apologize-how often do people from Fox News apologize?-but he did. I for one am appreciative.)

When I started reading about PaganFoxGate yesterday my first thought was “Thank the gods we have the Wild Hunt.” Even with Jason Pitzl-Waters on an airplane making his way home from San Jose, the Wild Hunt had a smart piece up about the incident within just a few hours. When stupid people say stupid shit about my religion I know that Jason has my back, and it’s a good feeling to have. The Wild Hunt isn’t a blog, it’s a news site, and that’s an important distinction. When news breaks in the Pagan world no one is coming to Raise the Horns to read about it, many of us are probably going over to The Wild Hunt.

This past weekend I participated in a panel at PantheaCon about “Pagan Intrafaith.” We ended up going wildly off topic and rolled around to the subject of the Pagan Blogosphere for about twenty minutes. I’ve been pretty honest and open about how influential I think the Pagan Blogosphere is. I have some idea of the numbers and they reflect a rather limited readership. The Pagan Blogosphere often feels like a closed loop, a lot of us write about the same subject, and many of the same readers comment from blog to blog. This is not me trying to insult anyone, it’s just a fact of life. If there are one to two million of us only a small minority of people are actively engaged on a day to day basis.

Teo Bishop live tweeted that particular discussion and one of his tweets was “Jason Mankey (a Pagan blogger) just said during the Patheos Pagan roundtable that in the big picture of Pagandom, Pagan bloggers aren’t that big of a deal.” That resulted in a long thread on his Facebook page, with one of his friends calling me a “baby.” I’m neither a baby or a big deal. Like most Pagan bloggers I simply write about Paganism, I don’t feel as if I’m teaching it, refining it, or creating it. Mostly I react to Paganism, with the occasional essay that I think you might find interesting thrown in. This is not to make light of what I do here. I think I write a lot of good stuff (like a lot of other bloggers), but most Pagans aren’t actively concerned with what goes on in the blogosphere. There aren’t “Blogosphere Book Clubs” or anything. What should ultimately matter within Paganism is practice and relationships with deity.

That’s not to say that certain ideas and articles aren’t capable of “bubbling up” from time to time. I’ve had several widely read pieces, articles that trascended the Pagan Blogosphere. Does that mean I’m influential or special? Nope, I just got lucky a few times writing about the Mayan Apocalypse and a couple of holidays. The majority of people who read those articles didn’t notice my byline or probably even pay attention to the Raise the Horns masthead. I’m fine with that, I read lots of articles online without noticing the writer or point of origin. The internet is often rather anonymous.

I have a lot of respect for my fellow bloggers. Those of us who do it with frequency spend hours of our lives writing, editing, and coming up with things to share. It’s work, and it’s a lot of work for something that can be extremely time consuming and offers little (and mostly no) monetary reward. Gods bless us, because I think we do great work. Our reach is small now, but it will continue to grow, and as it grows it will move beyond labels like “blogs.” Certainly sites like The Wild Hunt have already moved past such limited labels. Traditional blogs are just one part of the online Pagan Experience, they aren’t the only experience.

No one calls The Huffington Post a blog, why should I think of The Wild Hunt as one? When something important happens involving Paganism I know that The Wild Hunt is on it. The folks over there also (quietly) do a lot of work behind the scenes, stuff like setting local newspapers straight about Pagans. The online world is no longer a ghetto of “writers not good enough for print,” important things go on here between the pixels.

As Pagan Media grows up, there will be other forms of Pagan writing and reporting that move beyond the world of “blogs.” Teo Bishop’s Solitary Druid Fellowship is certainly more than a blog, it’s an example of shared experience and liturgy. It’s like reading a book that unfolds live before our eyes online. It’s certainly something that will be felt within the ADF Druid Community and among Teo’s many readers at Bishop in the Grove for years to come.

Patheos Pagan is a part of the Pagan Media maturation process too. We’re more like an online magazine than a collection of blogs. There are links to other Pagan sites, and we’ve also got some great columns here, columns that are (unlike this blog) professionally edited. We aren’t alone in this either, Pagan Square is growing right alongside us.

As people continue to be angry about PaganFoxGate I’m smiling about it. We’ve got smart Pagan reporting covering the situation, and that all of us were able to come together as a community and share some anger was nothing short of amazing. This is a bonding experience, a chance for the many facets of the online Pagan experience to coalesce. Don’t froth at the mouth about the stupidity of Fox, smile at the increasing reach of Pagan Media.

*I don’t wear kilts or animal tails, though I do have some antlers and horns I put on top of my dome from time to time. 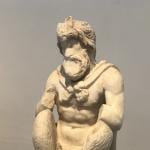 February 19, 2013 Pan: The God of All
Recent Comments
0 | Leave a Comment
Browse Our Archives
Related posts from Raise the Horns