The Morrigan, War, & How We See our Gods 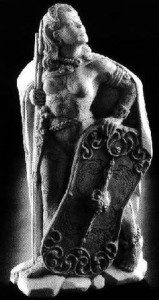 (Last week Asa West published I Have Conversed with the Morrígan about Gaza at her blog Jewish Witch here on Patheos Pagan. Her post inspired a great deal of discussion and thought both here at Patheos Pagan and in social media. I encountered several people who disagreed with Asa’s understanding on the goddess and when they lamented not having an online outlet for their take on the Morrigan I offered up Raise the Horns. And with that I bid you welcome to only the second guest post in the history of this blog . . . . )

One challenge of modern polytheism is understanding the old gods, both the ways they were understood historically and the ways they exist in the modern world. Sometimes this is difficult because we don’t have a great deal of surviving material about a particular deity. Sometimes it’s difficult because the deity’s character has features which challenge our modern mores or ideals. One goddess who often presents such a challenge is the Irish war goddess the Morrigan; many people see her bloody battle aspects and seek to find in her any hint of a soft mother or gentle fertility goddess. In a recent blog on Patheos one person spoke of the Morrigan encouraging non-violence, even theorizing that the ancient Celts would prefer to frighten enemies into fleeing rather than fighting. While the overall message of the blog was good this particular aspect is problematic because it presents the Morrigan in a way that does not reflect her historic persona. 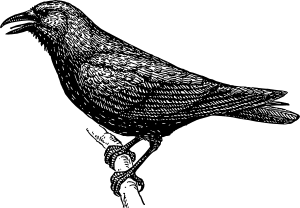 The Celts were well known for their love of war and fighting, something that contributed to their downfall at the hands of Rome and other invaders because of the Celts inability to stop fighting amongst themselves. As Strabo tells us “All of the Gauls…are absolutely mad about war. They are high spirited and quickly seek out a fight…”. Caesar tells us that the Gaulish Celts did not fear death in battle because they believed so firmly in the reality of another life after this one. That made them bold warriors and fierce fighters, something we also saw among the Irish. War was seen as a good thing when it was necessary and a way for a person to earn glory and fame.

The Morrigan herself is well known to incite battle by encouraging warriors to fight. In the Cath Maige Tuired she tells Lugh, who is leading the army of the Tuatha De Danann: “Undertake a battle of overthrowing….Awake, make a hard slaughter, smiting bodies, attacks boiling, greatly deafening, devastating, the people to a man crying out…”. (1) Later during the battle itself she appears and incites the army of the Gods to fight, chanting “Kings arise to battle…” so that they fight fiercely and overthrow their enemies. Her encounter with Cu Chulain in the Tain Bo Regamna can be seen as inciting him to battle, as she challenges him by saying he will die in the coming conflict which gets him to promise to fight for Ulster and brag of the glory he will gain. In the Tain Bo Cuiligne she appears to Queen Medb and encourages her to fight to avenge her slain son, and later in the same story she appears and encourages both armies to engage in battle with each other which results in a great slaughter.

The Morrigan is also associated with the carnage of battle, especially as Badb. (2) In the Cath Maige Tuired Cunga, the great battle between the Tuatha De Danann and the Fir Bolg, the Fir Bolg bard Fathach, on seeing the coming slaughter of his own people, says the red Badb would be grateful for the combat. In several tales she appears to feast on the dead after the battle is done, and in one version of the Tain Bo Cuiligne it is said that the Badb’s raven landed and began feeding on the dying hero Cu Chulain. The Morrigan appears during battles to terrify and to doom those she is against, and conversely to grant victory to those she favors. 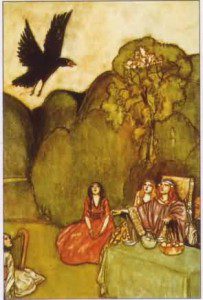 The Morrigan also has some association with peace, at least in that she prophecies it after her side wins the war. It is important to understand though that peace is not just a lack of war. Peace is freedom – freedom from fear, freedom from violence, freedom from oppression. Peace is worth fighting for, even when that fighting means everything that is the antithesis of peace. When war serves the purpose of freeing people from that which is holding them captive then it is a good thing and when we see the Morrigan inciting war it is often a war that is needed to bring freedom in some way. Peace is never free, but must always be fought for in some way, even though embracing war means destroying peace , or the illusion of peace, temporarily. Maybe that is the true cost of peace. Maybe that is why the Morrigan, a Goddess who is also connected to sovereignty, is connected to war because blood and battle are the coin we pay for calm and security.

Seeing the Morrigan bloody and encouraging battle is hard for many people. It is a grim and fearsome image. And yet, it is part of who she is. I think we do the Gods a disservice to project our own ideals and opinions onto them, to see them softened and gentled for our own comfort. This romanticized view of the Gods may make us feel better about the aspects of their characters we are uncomfortable with, but it doesn’t actually help us understand who they were, or who they still are. The Morrigan is a Goddess of war and battle; it is part of her nature. She encourages those she favors to fight and urges them to win, while simultaneously weakening the enemy and turning the battle against them. She is, effectively, the ideal war goddess: bold, fierce, and ruthless when it serves her purpose. It is up to us as modern pagans to seek to understand this and how the Morrigan as a Goddess of war is or can be part of lives today.

2. The Morrigan, properly, is both a name and a title given to several related Goddesses including Badb and Macha. Looking at the Morrigan as a war Goddess means looking at both the Morrigan individually and the other deities who bear that title.

About our guest: Morgan Daimler is an Irish Re-constructionist with Heathen tendencies who has been a polytheist since the early ’90’s. She is a Druid in the Order of the White Oak and witch who follows a path inspired by the Irish Fairy Faith. A wandering priestess of Odin and dedicant of Macha, she teaches classes on Irish and Norse magical practices, fairies, and related subjects around the northeastern United States. Morgan’s writing has appeared in a variety of magazines and anthologies including By Blood, Bone, and Blade: A Tribute to the Morrigan. Morgan is also the author of nine books including Fairy Witchcraft and the forthcoming Pagan Portals: The Morrigan. She blogs regularly at Living Liminally. 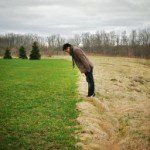 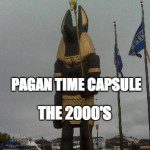 August 22, 2014 Pagan Time Capsule: 2000's
Recent Comments
0 | Leave a Comment
"Mabon's my favourite, I was surprised how low it was. I didn't expect it to ..."
Nekoshema Your Favorite Sabbats (Or Sabbats By ..."
"Love this! We often just call it "Pagan Thanksgiving" and have done with it. It's ..."
Seba O’Kiley Mabon: The Most Pressing Issue of ..."
"Well done, Jason!"
Angus McMahan Mabon: The Most Pressing Issue of ..."
"One thing I can't understand about Buckland's altar set-up is that he recommends a drinking ..."
Nicholas Chiazza Books Aging Poorly: Scott Cunningham’s “Wicca”
Browse Our Archives
Related posts from Raise the Horns