The Krampus has become an inescapable Christmas-figure the last couple of years, and not just in his home territories of Austria and Croatia. Today’s Krampus is a world-wide phenomenon, one we couldn’t escape even if we wanted to (and of course we don’t!).

I have always been interested in the origins of holiday things, especially ones associated with the Christmas season. Yuletide has always been a colorful blend of the pagan, Christian, and the mundane; a time when children as well as adults are allowed to truly indulge in the magical and the wondrous. We seem to have little time for myths in the modern world, except in December.

Super Holiday content at Raise the Horns:
The History and Origins of Santa Claus
The Other Gift Givers: Beyond Santa Claus
Christmas Traditions: Christian or Pagan?
Christmas Is Not Yours or Mine (On the True Origins of the Holiday)

The Krampus, like every holiday gift-giver, is a complicated piece of folklore, and may very well have derived from several different sources. One of the biggest difficulties in figuring out just where the Krampus comes from is that his modern guise is a relatively recent phenomenon. Written records of explicitly Krampus-like figures only go back to the 1600’s.

The Role of the Krampus:

♩♩He’s making a list he’s checking it twice gonna find out whose naughty and nice The Krampus is coming to town! ♩♩

In folklore the Krampus serves a couple of different roles. In many instances he’s an assistant to St. Nicholas. It’s Krampus who carries the toys and serves as St. Nick’s driver. There are a lot of early 20th Century postcards featuring Krampus and Kris Kringle traveling via motorcycle. This seems a bit odd but who would you rather have driving? An old guy in glasses whose beard probably gets in the way of his eyes, or the spritely Krampus? Me too.

Krampus is probably best known for threatening to kidnap misbehaving children, but I think such characterizations over-simply the Krampus. Krampus is simply a deterrent against bad behavior, and is really no different than the far creepier Elf on a Shelf. And Krampus is far more honest about his intentions, Elf on a Shelf is a tattle-tale who goes behind the back of children to rat them out to Santa Claus; the Krampus just puts naughty children in a sack or basket and whisks them away with no middle man. As the song above indicates Santa Claus in the United States would eventually come to fill both roles, gift-giver and punisher, but the good-cop/bad-cop St. Nick/Krampus dynamic is far more efficient.

I also want to pause to add that in many places fear of the Krampus is a very real thing. I have a coven-sister from Croatia who was terrified of the Krampus while growing up. When she was older her nanny told her that she was only really well behaved during the Holidays because of the Krampus. That’s an effective deterrent! 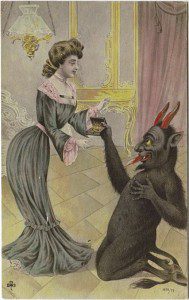 The Alleged Pagan Origins of the Krampus

Most histories of the Krampus begin by saying that he’s a pagan or “pre-Christian” figure. The trouble with that assumption is that I’ve never come across anything specifically linking him to an ancient paganism. Santa Claus is easily linked to Odin because they share certain similarities, such as riding a magical horse. The Krampus is far more difficult to connect to a specific figure.

It makes sense for Krampus to be of pagan origin, he certainly doesn’t look like a good Christian folk-tale, but he really doesn’t look like a pagan deity either. He doesn’t resemble Pan or Cernunnos, nor does he act like them. Attempts to link him to a universal horned god figure (think Margaret Murray’s God of the Witches) fail because most scholars today don’t believe such a thing ever existed.

It’s true that the gods of the old religion often become the demons of the new, so in that sense the horns adorning the head of the Krampus and his rampant sexuality may very well have ancient pagan origins. However, I’m not sure there is a straight line between a specific deity and the emergence of Krampus. Krampus picked up pagan attributes because demons were generally depicted that way.

When it comes to Krampus and ancient paganism(s) perhaps looking at deity isn’t the right path to follow. I think it’s more likely that the animal-like image of the Krampus evolved from mummery. Mumming involved dressing up in garish costumes, some fanciful, and some animal-like. Mummery is very likely to be pre-Christian* along with the parades that often accompany the practice. It’s not much of a stretch to get from someone dressed up like a goat to Krampus.

Update December 2019: Recently I’ve read a lot of articles on the Krmapus claiming that he’s son of Hel, Norse goddess of the underworld. I have yet to read anything with an actual citation to a legitimate source of history and/or mythology to corroborate this. It seems this is a rather recent idea, and comes from the world of fantasy fiction and video games. It would be super-cool if this were true, but I don’t like making claims that I can’t back up with legitimate sources.

The Krampus as the European Wild Man

I think a strong-case can be made for the Krampus as a part of the European Wild Man tradition. I first came across the “Wild Man” when reading about Bigfoot in elementary school. The European Wild Man was similar to the North American Sasquatch, being something between an ape and a human. Generally the Wild Man of Europe was more civilized than his North American cousin and he became a popular figure in 15th and 16th Century art.

Wild Men were said to live on the fringes of society and were often “boogeyman” like figures, much like our Krampus. Every region had their own Wild Man, and many of those have been liked to figures and deities from pagan antiquity. The popularity of Wild Man figures in European folklore means that he most likely ended up in several mummer’s parades. 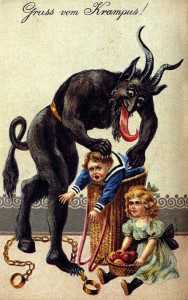 A Christian Origin For the Krampus?

I think people often overlook just how creative Christians can be. Fanciful figures don’t have to be pagan by default, humans are capable of creating such creatures no matter what the prevailing religion in a region is. Christian ideas about the appearance of devils and demons most certainly played a role in the iconography of the Krampus, and why not? Drawing devils and demons is fun, which is why they are so often figures in Renaissance art. If I had the choice between drawing the Virgin Mary and a demon I’m going to choose the demon every time, it’s far more interesting.

Christmas-tide is home to many fascinating holiday figures. One of the most interesting and overlooked is the Christkindl or Christkind. The Christkind figures of today are rather angelic-looking young women, but the figure was originally meant to be the Baby Jesus, or Christ Child. (Christkind is also where we get “Kris Kringle,” this things are all very much connected!) The Christ Child was adopted as holiday gift giver because Nicholas was just too Catholic for some people. The Christkindl provided an alternative, though I’d argue a really theologically ridiculous one.

Babies as gift-givers come with a whole set of limitations. Bags of toys are heavy and can’t be carried by a baby, so the Christ Child would need an assistant. In addition to not being able to carry stuff babies are not particularly intimidating. If Jesus wants children to behave why not go house to house with a demon? Besides, I’m sure for some it allowed for a sort of theological underpinning, with Jesus conquering demons and such. Some scholars believe that figures like the Krampus became a part of the holiday season precisely for these reasons, though they could have descended from the sources listed above.

Nicholas himself was a hard figure to keep down, and he was such an integral part of the holiday season that he eventually reemerged clad in furs and acting similarly to our Krampus. In some places he became the Belsnickle (from Pelznickel) which literally means “Furry Nicholas.” Other alternative names for St. Nick included Aschenklas (Nicholas in Ashes) and Ru-klaus (Rough Nicholas). It’s not hard for me to imagine a rather intimidating Nicholas dressed in furs looking much like early versions of Krampus.

In most parts of Europe Nicholas regained his status as primary gift-giver but ended up retaining the assistant. Santa-assistants most likely never became all that popular in the United States because they were absent when the Santa tradition was established in the early 19th Century. If the Krampus had been a part of Clement C. Moore’s A Visit From St. Nicholas (The Night Before Christmas) he might be even more popular today.

So Where Did the Krampus Come From?

I don’t think there’s an easy answer to the question. Like so much of the Holiday Season he’s most likely a combination of several different things. We humans love to dress up, and if Halloween is any indication we like dressing up in scary costumes, what’s to stop someone from doing it in December?

Christians love the Devil even if they don’t like to admit it, that’s why he’s been such a huge figure in art and literature for the past 700 years. It’s easy to imagine Nicholas in Furs being given a menacing looking mask to more easily reveal his rather wicked nature. The simplest truth is that European folk-lore has long been a combination of the pagan, mundane, and the Christian; why would the Krampus be any different?

*The first written account of mummery was in 1263, and the practice was extraordinarily popular during the Middle Ages across Western Europe. If mumming is pre-Christian showing up in the 13th Century is pretty strong evidence.

A Couple of Notes

Krampus as helper to the Christkindl shows up in Santa Claus: A Biography by Gerry Bowler, McClelland & Stewart Ltd, 2005. It’s a pretty reasonable explanation.

The notion above about mummery and the year 1263 is from Ronald Hutton’s Stations of the Sun, 1996, Oxford University Press. 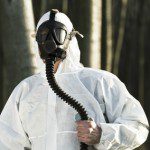 November 26, 2015
The Pagan Blogosphere: Not As Awful As You Think
Next Post

December 7, 2015 Taking Back Pagan Things: A Yule Ritual
Recent Comments
0 | Leave a Comment
"Really liked this article, Jason (longtime lurker, first-time commenter). I agree with your sentiment that ..."
brambleshadow She’s Wiccan
"I agree, there are new books, you should update your recommendations every decade or two. ..."
Nekoshema Books Aging Poorly: Scott Cunningham’s “Wicca”
"Mabon's my favourite. I don't like the heat and it's so hot by the time ..."
Nekoshema The Summer is for Pagans
"I get so frustrated with the current youthful fad of saying Witchcraft isn't a religion, ..."
Wolf Worship Is More Than Words & ..."
Browse Our Archives
Related posts from Raise the Horns