I’m under no delusions that everyone who practices Witchcraft today will one day drop their brooms and dance together around the cauldron. There are a whole host of differences among the modern strains of the Craft, and while we share a great deal, we don’t share everything. And while my wife and I don’t quite put up a You Are Not Invited sign when our Gardnerian coven meets, the idea is mostly true. Non-initiates are not welcome, and even certain lines in our tradition don’t have a free pass to join us. 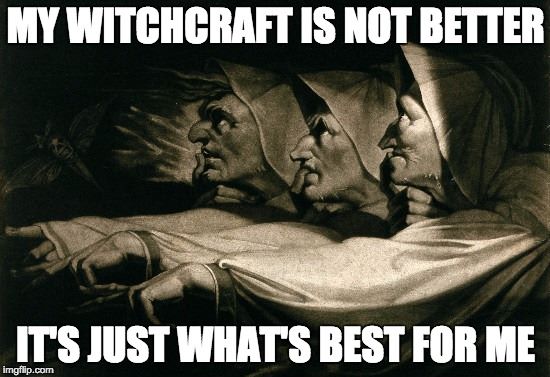 From the start Witchcraft has been rather exclusionary. Much of that is because of how the coven was originally structured. Today the phrase “perfect love and perfect trust” is often used willy-nilly and without a lot of thought, but originally that phrase was one of the core tenants of the Craft. The coven represented chosen family, and the only persons allowed in were those who had earned the love and trust of their fellow Witches.

Particular Witch-traditions are also about particular temperaments. Don’t believe in deity? Perhaps our Goddess-centric group won’t be a good fit. Does archaic (and somewhat sexist) sounding language bother you? Then what we say in our circle probably won’t resonate with you.* I love and trust all sorts of people who just aren’t a good fit with our coven and many of them are cognizant enough to realize that.

What I try not to do is judge the Witchcraft of others. The Feri Path is not for me but I still know that it’s a very real and valid path. My friends who practice it are strong and committed Witches and are doing good work. There is no version of the Craft that is “more authentic,” intense, scary, or real. I’m not threatened or jealous of other Witchcrafts, some are just different, and that’s great. When my wife and I go out for ice cream I go for the cookie dough and she goes for the mint-chocolate-chip, I know that the cookie dough isn’t really better because it’s what I prefer, I just know that it’s better for me.

When I complain about the current cosmic pissing contests that seems so prevalent in many Witch circles I’m often reminded by well meaning souls that the “Witch Wars” are nothing new, and that’s completely accurate. The first modern Witch War took probably took place in 1958 when Charles and Mary Cardell showed up in the Spiritualist magazine Light claiming to be Wiccens. After failing to impress Doreen Valiente and other established Witches the Cardells went to “war” on Gardnerian Witchcraft,** which culminated in the book/pamphlet Witch by Charles Cardell released under the pen-name Rex Nemorensis. (1)

Witch was meant to be a “tell all” about Gardner and included (alleged) excerpts of the Gardnerian Book of Shadows. Cardell was too cowardly to release his book while Gardner was still alive and released it in 1964 just a few months after Gardner’s death. I don’t like to speak ill of the dead but the Cardells were quite a strange couple (they liked to pass themself off as brother and sister, which they were not), and they faded from history shortly after the release of Witch. Today they are a curious footnote in Witch history and are probably most famous for being involved in the first public Witch War.

The second major Witch dust-up was instigated by someone who would have a lasting impact on Modern Witchcraft, Robert Cochrane (Roy Bowers). Cochrane was one of the first people to go public with a Witchcraft tradition outside of Gerald Gardner’s, and he wasn’t all that nice about it. (In his defense, I’m sure there were lots of Gardnerians behaving badly here too.) In Doreen Valiente’s memoir The Rebirth of Witchcraft she mentions Cochrane’s desire to have a “Night of the Long Knives” with the people he derisively called Gardnerians. (3) (And since there were not a whole lot of Witches in England at the time, the whole idea is completely absurd.)***

Cochrane had a combative personality and his friend Evan John Jones once remarked that “he seemed to want to be at loggerheads with most other occultists.” (3) By the time Cochrane was calling for his night of the long knives he was most likely dealing with some sort of serious mental duress. He took his own life shortly after Valiente left his Clan of Tubal Cain in 1966.

There have always been problems in the world of Witchcraft, but I think it’s a lot different today than it was fifty or even twenty years ago. It shows up in people and groups who define their own Witchcraft not by what they do, but what they stand in opposition to. It’s one thing to say “I don’t practice Witchcraft like she does” and another to say “the Witchcraft they practice is not serious” all while not knowing who they truly are. I understand not liking Gerald in 1960, it’s another when all of his past and present initiates are also dismissed out of hand.

Public arguments amongst Witches were also once considered propositions. If you wanted to argue in a public forum about Witchcraft it required a bit of work. You had to get out the type-writer and put together a letter; there were no outlets for immediate criticisms and condemnations. I remember writing letters to editors, it was a pain in the ass, and by the time you were ready to write your letter the anger had probably already passed anyways. All kinds of arguments were probably avoided due to sheer laziness forty years ago. Even if you got your letter written it often took months for it to appear anywhere, and by that point everyone might have already forgotten about the argument.

Even our most public arguments thirty years ago were still mostly private. They occurred in Pagan magazines, which took a bit of work to track down. In 1993 I didn’t have to worry about my Aunt Donna stumbling across an argument on my Facebook feed about Wiccan privilege. Today our comments are available for just about anyone to see, and even things posted in private groups can be easily copied and shared with thousands. I wasn’t a big fan of Tarostar in the Green Egg Forum circa 1996, but I also didn’t make copies of his letters and pass them around the campfire, but we kind of do that today when we share something on social media.

Social media makes every argument so immediate and personal. Discussions that might have once occurred over the course of a year unfold over an afternoon. Instead of carefully considered opinions responses are written in minutes, without any time to reflect upon them, and issues of great complexity are simplified into yes or no arguments. Today we share memes and quotes without a second thought as to how others might react to or be hurt by such ideas. Yes, there have always been Witch Wars, but they’ve never played out so publicly before.

There have always been spiteful Witches and there have always been Witches intent on telling everyone that their version of the Craft is superior. But because we communicate with one other so quickly and we have so many immediate public forums the arguments and controversies are bigger. Twenty years ago you could hide in your Temple Room and just do your shit, and not worry about Witchcraft outside your own walls. Not as possible in the age of Facebook, Twitter, and blogs. Even if you don’t engage in all the mudslinging you still see and are even possibly affected by it on some internal level.

There is no one Witchcraft that is “better,” there’s only what’s best for each of us. Instead of arguing about what’s “real” let’s share some experiences and create a better Craft. Witchcraft is about what works, and it works much better when we focus on our own Craft instead of everyone else’s. 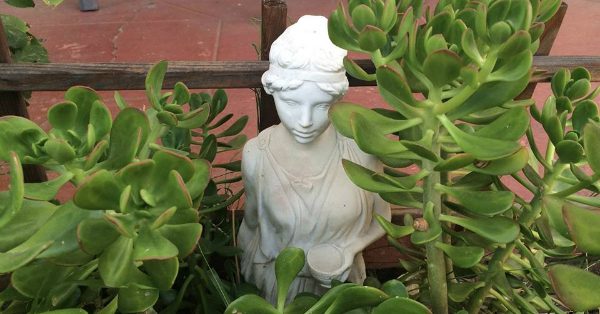 COMMENTS THAT DIDN”T MAKE THE ARTICLE

*We’ve always recited Doreen’s Valiente Charge of the Goddess with the words “beloved of gods and men” which is how we first heard it. It was later amended to read “gods and mortals,” but we we think the extra syllable throws off the Charge’s cadence.

***I’ve grown quite fond of Cochrane over the last few years and some of his ritual innovations show up in my own rites from time to time. The end of his life is an utter tragedy, and it’s possible that Modern Witchcraft might be very different today had history proceeded a bit differently.

1. Taken from Ronald Hutton’s Triumph of the Moon, Oxford University Press, 1999 pages 298-299. I’ve quoted this book so many times in my life that I don’t even have to check the title page for the publisher and year.

2. The quote is from Valiente’s Rebirth of Witchcraft (Phoenix Publishing, 1989), but I looked it up in Philip Heselton’s Doreen Valiente: Witch, published by the Doreen Valiente Foundation in 2016. It actually just came out this past February. Page 135. 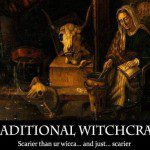 April 7, 2016
When Did Witchcraft Become a Contest?
Next Post 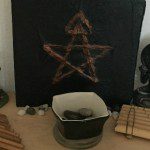 April 20, 2016 10 Pagan Things To Do (Instead of Argue)
Recent Comments
0 | Leave a Comment
Browse Our Archives
get the latest updates from
Raise the Horns
and the Patheos
Pagan
Channel
POPULAR AT PATHEOS Pagan
1