As long as people keep using stuff in rituals and ceremonies, there will be altars.

The word altar first shows up in the written record around the year 1200 BCE, but is probably at least 200 years older than that. The Oxford Dictionary links it to the Old English word alter, which it then links to the Latin altus which means “high.” The word altar could also derive from the Latin altare which means to “burn up” or in some translations “to ritually burn.”

Either origin makes a great deal of sense. In both Christian churches and ancient pagan temples altars were always up off the floor, sometimes to a grand degree. Burning materials, generally incense, have been common on altars for centuries too. Whatever the origin of the word, it’s grounded in practicality.

It’s hard to date the first use of an altar, especially since rocks and tree stumps make fine altars, but tables for ritual purposes probably date back at least 30,000 years to ancient cave-painters. (Europe’s painted caves are the most well known, but cave painting took place world-wide. Indonesia’s Pettakere Cave, is as old or even older, than anything discovered so far in Europe.) Chauvet Cave in Southern France has a rock with a bear skull on top of it, and it seems likely it was put there for a ritual purpose (though it can’t be proven absolutely).

The Witch’s Toolbox: Book of Shadows

Also be sure to check out my book The Witch’s Athame, and The Witch’s Book of Shadows.
In November of 2018 Laura Tempest Zakroff and I will be releasing a book all about altars!

Though I don’t own any bear skulls, my house does contain several altars. Two of them sit in my living room, one on our fireplace mantle, and a second on top of our oldest (and lowest) communal bookshelf. They aren’t ever really used for Witch-work, but they still hold spiritual significance for my wife and I. The various deities we’ve come to honor over the years are represented on them, as are the ever-changing seasons. (I redecorate them every few months to reflect where are on the wheel of the year.) I like to think that our living room altars are representative of my wife and I’s life together.

On top of yet another bookcase (this time in my office) sits my own personal altar. We use it occasionally during ritual when circumstances dictate the need for a second room, but mostly it’s representative of me. There’s always at least one horned figure on it, along with gifts I’ve received over the years that I feel honor Pan and Dionysus. There’s also a candle holder with figures holding hands dancing in a circle, it’s a reminder of what Paganism can be on its better days.

The tops of bookshelves have always served me well as altars. As a baby-Pagan I tended to end up living in attics (it was during college), and most of them had sloped walls. That made traditional tall bookshelves out of the question so I littered my space with mini bookcases all with their own altar on top of them. Generally I matched the altar top to whatever books were below it, because I’m like that. Those altars weren’t just ornamental though, they were working spaces too, though rather limited.

The most important altars in our house are, not surprisingly, in our ritual room. I often think of the table that sits in the middle of that room as the altar, but that’s not completely accurate. Our main altar is flanked in the north and south by additional spaces for stuff. One of those is where my wife tends to set up many of our magical workings, and the other often holds our sword, cakes and ale, and the bowl and pitcher we use for ceremonial cleansing. Until I started this article I hesitated to call those spaces altars, but they have defined roles in our work, and are home to specific tools and and other items.

For whatever reasons my wife is not a big fan of the altar in the center of our ritual space (“it’s not big enough!” “it’s old and beaten up!”), but we’ve been using it for Witch-purposes for nearly fifteen years now, making it one of our oldest ritual tools. Unlike most of my ritual tools I have no idea where our main altar actually came from. It showed up in our living room one day as a spot for drinks and a lamp, and eventually began to get cleared off periodically when we’d host ritual. When we started our coven out here in California there wasn’t much debate about what we’d be using as an altar.

I’m weirdly attached to our table altar for a number of reasons, even though my wife is right about it being in rough shape (but that’s what altar cloths are for!). I’ve used a lot of altars over the years that are too low to the ground, ours comes up to about my waist meaning I don’t have to lean it over it a whole lot while we are working, or worry about candle-flames lighting my precious locks on fire. (You laugh, but hair on fire is more common in Witch circles than you might think.) Our altar is also strangely solid and doesn’t wobble. This is important when dealing with precious statues that you don’t want breaking, and officiants who might occasionally sit on the altar.

We don’t often give a lot of thought to our altars, we are far more likely to think of the tools we place on them, but a good altar is also a place of power. In my coven the altar is often a focus point for our various spells and energies raisings. When building the cone of power our energy is often directed to a point just above our altar. With so much power being directed at the altar I’m sure that it’s picked up a whole lot of juice over the years. Just setting something on top of it feels like a magical act at this point in our practice.

Traditionally the pentacle is the focal point when it comes to magical work, but if you use the same altar again and again, it will begin to serve a similar function. I often view the pentacle as a gateway to the realm of the gods, but our altar has such presence that I think it has that power all on its own.

Altars are great for places for cleansing items, and not just actively during ritual. When my wife or I purchase a new magical item it generally goes on our altar immediately. There it gets in touch with our energies and those of our coven and deities. If that new item contains any negativity that’s generally all erased by the time we use it in ritual. Even when not in use, our main altar continues to radiate good energy, and it seems wasteful not to put that energy to work.

I don’t think there’s anything necessarily out of bounds when it comes to what goes on an altar. As long as what you are placing there is sacred to you or represents something you find spiritually significant it’s a good fit for the altar. I’m a big fan of the unconventional on the altar, which in my home sometimes means a bottle of good scotch or a birthday card. Creativity is an important Witch-attribute and should be a part of any good altar building.

In addition to our altars my coven has a “shrine” on a bookshelf in our ritual space. The shrine contains a few non-rotating deities (most notably Cernunnos and Bridget), along with our Mighty Dead of the Craft. It doesn’t make sense to include the pictures of our departed elders on the altar, but the shrine works as a suitable home. Our dead, along with Cernunnos and Bridget, are not actively invoked at every ritual but they know they have a standing offer to join us if they so wish. I think of our shrine space as a less-active altar.

While the best altars probably remain rocks, tree stumps, and other naturally occurring spaces, a dedicated altar in the home has its place too, and it’s more than just a place for stuff. 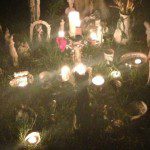 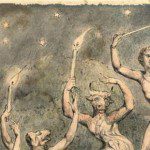 May 17, 2016 Coven Challenges
Recent Comments
0 | Leave a Comment
"Actually, the old form of "Worship" meant to Honor and Respect someone. Thus Knights went ..."
Kyllein MacKellerann " Worship Is More Than Words & ..."
"Is not "Worship" in fact a relationship with a superior being/force/entity/whatever? I was taught that ..."
Kyllein MacKellerann " Worship Is More Than Words & ..."
"Thank you for bringing a smile and a much needed giggle to my day! 😊"
LodestarWytch A Tale of Dionysus
"OMG Yes! 🤣🤣🤣"
LodestarWytch A Tale of Dionysus
Browse Our Archives
get the latest from
Raise the Horns
Sign up for our newsletter
POPULAR AT PATHEOS Pagan
1