Demons, the Occult, and the 2016 Presidential Campaign

Demons, the Occult, and the 2016 Presidential Campaign October 11, 2016 Jason Mankey

Most Americans are use to to religion being a part of the modern political machine. Every major speech/appearance given by a political figure tends to end with “God Bless” in some form or another and Democrats and Republicans fight amongst themselves for the endorsement of Jesus. Even when I truly like a candidate, it can be hard to get over the preachiness sometimes.

But even with all the Jesus love in our politics, there’s very rarely any “occult” stuff in our national races. (If any Christians stumble across this article, you should know that a lot of your faith is infused with occult ideas and imagery, especially the Evangelical stuff. A Devil with lots of power, demons, possession . . . . all of that stuff is a part of the occult.) But the occult made an appearance in this past Sunday’s Presidential debate between Hillary Clinton and Donald Trump, even though most people didn’t notice it. And it happened when Donald Trump called Hillary Clinton the Devil.

I know it sounds like the regular bat-shit crazy off-the-cuff Donald Trump remarks we are all used to at this point, but it carries a bit of weight because of who Donald Trump hangs around with. If you’ve never heard the name Alex Jones until now be grateful for that small blessing, because Jones is everything wrong with today’s bubble culture. Jones operates a right-wing conspiracy website and hosts a call-in radio show. Both outlets are full of stories like “Dr. Oz Promotes the Mark of the Beast” and “High Alert: The System Can Still Be Rigged;” it’s paranoid, dishonest propaganda of the worst kind, and Donald Trump called into Jones’s show in December of 2015.

Trump wasn’t just a one time guest either, apparently he’s a listener. In August of this year Jones shared this about Trump’s campaign speeches: “It is surreal to talk about issues here on air, and then word-for-word hear Trump say it two days later.” Jones has also alluded to the fact that he and Trump speak on the phone with some regularity.

Jones’s conspiracy theories aren’t just wrapped in a tin-foil hat either, they come wrapped in the Bible. What makes Trump’s use of the word “Devil” so troublesome in Sunday night’s debate is that people like Alex Jones (and apparently his followers) believe that both Hillary Clinton and Barack Obama are possessed by demons. This isn’t just stuff about Jesus, this is about Exorcist levels of brimstone and Beelzebub. Here’s a recent diatribe from Jones’s show about this topic, via Media Matters:

ALEX JONES (HOST): I’m never a lesser of two evils person, but with Hillary, there’s not even the same universe. She is an abject, psychopathic, demon from Hell that as soon as she gets into power is going to try to destroy the planet. I’m sure of that, and people around her say she’s so dark now, and so evil, and so possessed that they are having nightmares, they’re freaking out. Folks let me just tell you something, and if media wants to go with this, that’s fine. There are dozens of videos and photos of Obama having flies land on him, indoors, at all times of year, and he’ll be next to a hundred people and no one has flies on them. Hillary, reportedly, I mean, I was told by people around her that they think she’s demon-possessed, okay? I’m just going to go ahead and say it, okay?

They said that they’re scared. That’s why when I see her when kids are by her, I actually get scared myself, with a child — with that big rubber face and that — I mean this woman is dangerous, ladies and gentleman. I’m telling you, she is a demon. This is Biblical. She’s going to launch a nuclear war. The Russians are scared of her.

Imagine how bad she smells, man? I’m told her and Obama, just stink, stink, stink, stink. You can’t wash that evil off, man. Told there’s a rotten smell around Hillary. I’m not kidding, people say, they say — folks, I’ve been told this by high up folks. They say listen, Obama and Hillary both smell like sulfur. I never said this because the media will go crazy with it, but I’ve talked to people that are in protective details, they’re scared of her. And they say listen, she’s a frickin’ demon and she stinks and so does Obama. I go, like what? Sulfur. They smell like Hell.

“Satanic demon is leaving body of witch Hillary Clinton (or she is having a seizure). Scornful spirits from the Clinton’s trail of death are taking revenge on their killer, of (sic) Hillary simply forgot to take her seizure medications? Either way, as the most corrupted, traitorous candidate ever ran for U.S. Presidency who now cannot pass even a simple background check, let alone higher security clearance levels, Crooked Hillary Clinton is certainly unfit for the highest office on the land. That probably explains her tendency to be “easily confused”, as attested even by her top aide, the Muslim Brotherhood operative Huma Abedin.”

Am I super cool with Hillary being called a witch? You bet! But I’m pretty sure she’s a Methodist.

Of course Jones and his ilk represent only a small portion of the electorate, but in many ways Trump has helped to legitimize this rather confused group of people. When he loses next month it won’t be the fault of Jesus or the electorate, it will be because of the demons that plague most Democratic candidates. It’s all absurd of course, but it might be something someone brings up at Thanksgiving dinner. 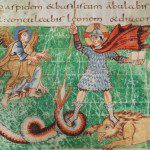 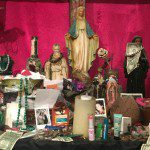 October 18, 2016 Adventures in New Orleans: Voodoo & Marie Laveau
Recent Comments
0 | Leave a Comment
Browse Our Archives
get the latest from
Raise the Horns
Sign up for our newsletter
POPULAR AT PATHEOS Pagan
1