On How Small the Christian Peace Movement Is (w/ Gratitude to the Anabaptists) February 25, 2014 Tim Suttle 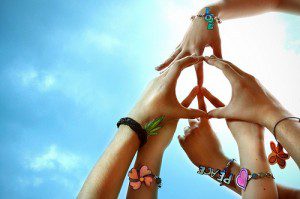 “It is sometimes discouraging to see how small the Christian peace movement is, and especially here in America where it is most necessary. But we have to remember that this is the usual pattern, and the Bible has led us to expect it. Spiritual work is done with disproportionately small and feeble instruments. And now above all when everything is so utterly complex, and when people collapse under the burden of confusions and cease to think at all, it is natural that few may want to take on the burden of trying to effect something in the moral and spiritual way, in political action. Yet this is precisely what has to be done.… [T]he great danger is that under the pressure of anxiety and fear, the alternation of crisis and relaxation and new crisis, the people of the world will come to accept gradually the idea of war, the idea of submission to total power, and the abdication of reason, spirit and individual conscience. The great peril of the cold war is the progressive deadening of conscience.”

— Thomas Merton (from a letter to Jean and Hildegard Goss-Mayer, The Hidden Ground of Love).

Last Sunday I preached on Matthew 5:38-48. This section is certainly among the most challenging and important portions of Jesus’s Sermon on the Mount. It’s also one of the most routinely dismissed and ignored. I’ll post the sermon transcript tomorrow, but I wanted to think about Merton’s great observation today. Why is the Christian peace movement so small? Why are so many Christians willing to engage in a search and destroy mission around issues like homosexuality (upon which Jesus did not comment), or insistent upon adherence to Jesus’s teaching on divorce, and yet so willing to ignore the clear command to “love your enemies,” that is part of the very same chapter of Matthew as the divorce teaching?

For most of us as evangelicals, the faith of our fathers and grandfathers did not include any kind of strict adherence to Jesus’s teaching on violence. Christian non-violence was never mentioned as a possibility in my Southern Baptist upbringing. In fact Matthew 5:38-48 remained indeterminate in all of my discipleship and training until I ran into Stanley Hauerwas, John Howard Yoder, as well as many of my professors and fellow students at seminary. That Jesus’s teaching on non-violence is so largely ignored or misunderstood in the general culture has to be at least part of the reason Reza Aslan’s Zealot could become a best seller. Anyone steeped in the tradition of Christian non-violence would quickly point out the way Aslan completely ignored huge swaths of Jesus’s life and teaching, especially the way that non-violence is essential to a Christian understanding of the gospel.

The obvious exception to this would be the Anabaptists. I often think that God preserved two important doctrines among the Anabaptist people. The first is the gospel of the kingdom of God (as opposed to a gospel of sin management & how to get into heaven when you die). The second is the doctrine of Christian non-violence. The Anabaptists are now powerfully and prophetically teaching the rest of us these essential doctrines to the wider church.

Stanley Hauerwas often says that Christians are not committed to non-violence because they think it will be an effective strategy to rid the world of war. Christians are committed to non-violence because they cannot imagine any other way to live in light of the life, teaching, death, and resurrection of Jesus. I find it ironic, then, that for the most part the opposite is true. Most Christians in our society cannot imagine living non-violently in such a violent world. We have no imagination for what it might mean to respond to our dog eat dog world by turning the other cheek, offering our cloak & tunic, and going the extra mile. I had been following Jesus for at least twenty-five years before anyone challenged my thinking in regard to violence and war and Jesus’s teaching on the matter.

I do not think there is only one obedience. And I’m not unsympathetic to the fact that this is a very complicated issue and a difficult stance to take in light of the realities and vagaries of the modern society, to say nothing of the contemporary geo-political milieu. But I do pray for the imagination to try to live in the world non-violently, while still attempting to use my voice to speak out for those who live on the margins of our world, and my body to display the injustice of those who are committed to violence. I am constantly challenged by Hauerwas and Yoder’s insistence upon the reality that in order for the kingdom to be intelligible to the world, it must be made visible. In order for it to be visible there must be a community committed to living in the way of Jesus, whether or not it seems realistic or practical. If we are to be committed to living in the way of Jesus, Christians must begin to take seriously Christ’s call to an imaginative, non-violent, enemy-loving response to a world that is convinced that violence is inevitable and inescapable.

Merton is surely right to say, “[T]he great danger is that under the pressure of anxiety and fear, the alternation of crisis and relaxation and new crisis, the people of the world will come to accept gradually the idea of war, the idea of submission to total power, and the abdication of reason, spirit and individual conscience.” This is why all teaching on non-violence must necessarily be an evocative appeal to an entirely new imagination, for the old imagination is held captive to a culture in which violence is not only inevitable, but even celebrated. A wholesale renewal of the Christian imagination in regard to violence is an essential step in our discipleship if we are ever going to make Christ visible in this world. I find it impossible, after the cross, to believe Christian non-violence is an ancillary teaching of the church. If Christ was God in the flesh, and he didn’t take up arms to inaugurate the kingdom, then the only way we as Christians will ever learn to live a life that is in step with this Messiah and his kingdom is to wrestle with the command to love our enemies.