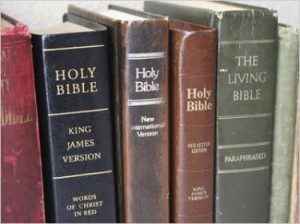 Scot McKnight has a nice blog post in which he describes why the Bible translation you prefer says something about your personal politics. While I think bible scholars and teachers overestimate the amount of “use” these bible translations actually get (it’s been my experience that most Christians don’t read their bibles much at all), Scot makes an interesting point. He says that all bible translations are good, so the only reason to prefer one English translation over another is to identify with a Christian subset, sect, or sub-culture which has chosen allegiance to that version as a kind of boundary marker.

All English translations are equally good, but are they equal? Do some English translations have an agenda (or I guess more accurately did the editorial board have an agenda), to which leaders of these subsets have responded with an allegiance? Are there times that this agenda can obscure the meaning of a text and confuse the reader? Might there be real reasons members of Christian subsets tend toward one translation or another that do not have to do with the quality of the translation–its relative “good”-ness–but the underlying agenda of the editorial board?

Filling in the gaps between the original language and contemporary English involves thousands of choices, each of which shapes the meaning of a text in ways that cannot be easily accounted for by a typical reader. To read a translation is to put your trust in a bunch of scholars about which you know very little. If every translation editorial board has an agenda. Are all of those agendas equally good? It’s an important question, because that agenda has shaped their translation.

For instance, in order to produce the ESV (English Standard Version), the publisher assembled a team of translators, translation review scholars, and a translation oversight committee. All in all we’re talking about close to 150 scholars. Among this list there are exactly zero women. That the ESV is the bible of white complementarian conservatives is not by design. This version was constructed by men to serve the purposes of complementarian views. It’s hard not to view the ESV as a boundary marker, when it seems to have been created intentionally as a boundary marker.

In his book Justification, N.T. Wright takes the NIV to task for its translation of Paul’s writings.

Again and again, with the Greek text in front of me and the NIV beside it, I discovered that the translators had another principle, considerably higher than the stated one: to make sure that Paul should say what the broadly Protestant and evangelical tradition said he said… if a church only, or mainly, relies on the NIV it will, quite simply, never understand what Paul was talking about.” – N.T. Wright, Justification, p. 52.

Wright is saying that the NIV editorial agenda renders the translation suspect with regard to Paul. We know that N.T. Wright has an agenda. So, how does the reader who is not a world class bible scholar respond? Might it be a legitimate approach to say, for instance, when it comes to reading the Pauline corpus, we shouldn’t rely on the NIV in any material way?

Although I agree with McKnight that all translations are equally good, and that we should not limit ourselves to a single translation, I think we must allow that all translations are not equally equal. Each version has strengths and weaknesses. Some versions hold allegiance to agendas, be they theological or quasi-political, that should be accounted for. The reader benefits when they understand those agendas.

I want to support McKnight’s overall recommendation that we should use all of the modern translations, and talk about them in such a way that they can no longer be used as a boundary markers, with this one exception. I think we must recognize that it is a legitimate stance for a man or woman to say, “I don’t read the ESV, because women were intentionally excluded from the process of its construction.” It is legitimate to say, “I don’t read Paul’s writing in the NIV, because the editors played games with the original language that borders on an attempt to deceive readers,” which is the point N.T. Wright makes (Justification, p. 53). In other words, although I think we ought to read across many translations, leading our congregations to do the same, we need to tell the truth about the agendas that come into play.

McKnight’s argument makes sense to me, I think, because I benefit from this approach. Over the course of the past year I have used at least ten different translations while preaching: NRSV, NIV, ESV, TNIV, CEB, NASB, KJV, NET Bible, NLT, AMP, and The Message. I will often reference more than one translation, highlighting accents and differences. The Bible that sits on my desk at work is an ESV journal bible. On my desk at home is an NIV bible. On the altar at church sits an NRSV which is used during communion each week. (If any bible publishers are reading here, I’m happy to receive free copies of your version:-) ).

I wonder if it’s not enough to say that all of the major modern translations are equally good. We also ought to know the ways in which they are not equally equal at times (something McKnight has done well in his writings and speaking), even as we are using all of them liberally. We also ought to accept that some can be ignore or rejected out of conscience. More than anything, we must remember that interpretation is an ongoing conversation that can ever be settled by any one definitive translation.