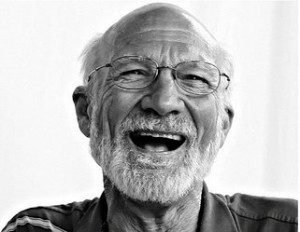 If I had to pick one theologian who has had the most influence on my thinking–probably my being and doing as well–it would be Stanley Hauerwas. He has the ability to see the world the way I want to see it. He’s unafraid to tell the truth about his own life, which seems to give him the freedom to tell the truth about almost anything.

When I am in a rut or a quandary, when I’m having trouble seeing the truth about the world or myself, when I’m disillusioned or am just in a bad mood, I reach for Stanley Hauerwas. Most often I reach for Resident Aliens, or A Peaceable Kingdom, or I listen to a talk or lecture he’s given. It nearly always makes me feel better–not because he offers words of comfort, which is not his strong suit–but because he tells me the truth.

I don’t need everything to be okay in the world because I am not in charge of the world. I don’t need everything to be fine, because when is that ever going to happen? And if it did happen, do you think I would feel better? I doubt it. Hauerwas taught me to say those things. I find that after reading or listening to Hauerwas, I can be patient. I can trust that God has me and has the church. My life makes more sense to me, and the parts that don’t make sense seem to bother me less because his writing makes me want to worship. Worship is a deeply humanizing act. When I worship, I feel human again.

Here are a few of the Hauerwas quotes I’ve collected over the years. My advice is nearly always: you need a little more Hauerwas in your life.

“Beware when you hear a Methodist minister quote his twelve year old. When that happens you  know you’re fixin’ to hear some bullshit.”

“If you ever think you’ve got it right, you probably don’t.”

“The courageous have fears that cowards never know.”

“Peace is a deeper reality than violence.”

“The first task of the church is to be the church.”

“The heart of the gospel is that you don’t know Jesus without the witness of the church. It’s always mediated.”

“The church therefore is a polity like any other, but it is also unlike any other insofar as it is formed by a people who have no reason to fear the truth.” APK 102

“Jesus is Lord, and everything else is bullshit.”

“… over the years I have come to the judgment that Southern civility is one of the most calculated forms of cruelty.” HC

“When Christianity is assumed to be an ‘answer’ that makes the world intelligible, it reflects an accommodated church committed to assuring Christians that the way things are is the way things have to be.” HC

“Nowhere in scripture do we get a distinction between religious belief and behavior.” APK 53

“I say I’m a pacifist because I am a violent son of a bitch. I’m a Texan. I can feel it in every bone I’ve got. And I hate the language of pacifism because it’s too passive. But by avowing it, I create expectations in others that hopefully will help me live faithfully to what is true. But that I have no confidence in my own ability to live it at all.”

“Our need to be in control is the basis for the violence of our lives.” APK47

“Christians are called to live nonviolently not because we believe nonviolence is a strategy to rid the world of war, but in a world of war as faithful followers of Christ, we cannot imagine being anything other than nonviolent.”

“Church growth strategies are the death gurgle of a church that has lost its way.” (Shrink blurb)

“American Protestants do not have to believe in God because they believe in belief. That is why we have never been able to produce an interesting atheist in America.”

“The movement that Jesus begins is constituted by people who believe that they have all the time in the world, made possible by God’s patience, to challenge the world’s impatient violence by cross and resurrection.”

“The problem with the U.S. foreign policy is that we’re just so unbelievably powerful. And when you’ve got that kind of power, it’s very hard not to use it.”

“I am a Congregationalist with Catholic sensibilities. Which probably explains how I ended up in a Episcopal church.”

“From my perspective, ‘postmodernism’ merely names an interesting set of developments in the social order that is based on the presumption that God does not matter.”

“There is nothing wrong with making money, but it was just not in my family’s habits to know how to do that. All we knew how to do was work, and we usually liked the work we did.”

“Ethics… is not primarily about rules and principles, rather it is about how the self must be transformed to see the world truthfully. For Christians, such seeing develops through schooling in a narrative which teaches us how to use the language of sin not only about others, but about ourselves.” APK,33

“Our ‘freedom,’ therefore, is dependent on our being initiated into a truthful narrative, as in fact it is the resource from which we derive the power to ‘have character’ at all… The fundamental category for ensuring agency, therefore, is not freedom but narrative.” APK43

“The self is fundamentally a social self. We are not individuals who come into contact with others and then decide our various levels of social involvement. We are not “I’s” who decide to identify with certain “we’s”; we are first of all “we’s” who discover our “I’s” through learning to recognize the others as similar and different from ourselves. Our individuality is possible only because we are first of all social beings. After all, the “self” names not a thing, but a relation. I know who I am only in relation to others, and, indeed, who I am is a relation with others.” APK 96-97