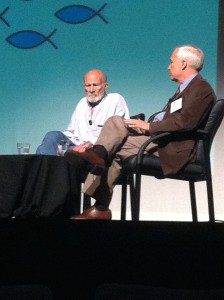 I spent the past couple of days at Duke University listening in on conversations between Stanley Hauerwas and William Willimon. The event was part of Duke’s annual Convocation and Pastor’s School. Twenty-five years ago Hauerwas and Willimon teamed up to write the book Resident Aliens. To date the book has sold over 160,000 copies, a remarkable number for a book of this type, and remains an important part of the literature regarding ministry and the church. I consider this book to be ground zero in terms of my own understanding of what the church is and what it is for, as well as my own job and what I’m trying to do as a pastor.

What follows is a collection of quotations (not all 100% accurate, but very close), from the various sessions with Hauerwas and Willimon.

“To be asked to die for this man is… He’s either the Son of God, or you’re making a terrible mistake.” SH

“Balance isn’t a Christian concept. Avoiding stress & having balance isn’t nearly as important as having a job.” WW

“You will find much in the world that is judgment on the church for failing to be the church. So it’s not like world is all negative.” SH

Upon being asked if Resident Aliens is for a diverse Christianity, or just a homogenous, white, American group, Hauerwas said, “Well I resent being lumped with Will. He’s from South Carolina. I’m a Texan. The implication that there’s no difference; that we’re both just white males… I mean, he’s a southerner & a Methodist… he’s always wanted to be liked.” To which Willimon replied, “You would if you could.” Hauerwas continued, “I recognize of course that there’s… the language of homogeneity can be very misleading. I recognize race as continuing to be one of the great challenges before us, I think equally hidden is class, and how we don’t acknowledge the difference that class makes in our lives and that’s particularly true of the church. Race is legitimate to be dealt with [in the church], class is not.”

“There’s a funny way in which the world [ignoring the church] is making the church a whole lot more interesting.” WW

“Mission is whenever the gospel crosses some existing boundary.” WW

“The gospels is always intruding where it is not wanted. Jesus was always showing up where he was not invited.” WW

“In a declining, failing system, good news is a threat.” WW

…being a bishop has let him see things so stunningly faithful they forced him out of his world hating depression. WW

“Biggest moral problem for students is a parents’ divorce. You leave a bourgeois marriage to go find yourself… They were 12 years old when you got your divorce… divorce looks a whole lot different from the bottom up.” WW

“Church us a more determinative category than race, gender, or class.” WW

“Every kind of work has its advantages & disadvantages. What’s crucial is a sense that it serves the community.” SH

“We’re in the death business, the church is. Part of our job is to help people learn how to die.” SH

“I think people are literally dying to be told the truth.” SH

Jesus: “I’m gonna build my church…the question is will you have the theol. Imagination to welcome those ill drag thru the door.” WW

“If the doors are red, it’s a reminder to anyone that passes through them that we’ve been made possible by the blood of the saints, so it’s not just any doors you’re going through. I would think it would make people hesitate for at least a moment, to say ‘Do I want to go through this?’” SH

“A student resisted me when I gave out a bad grade on a paper… and I said, “Look, if you don’t like making bad grades on fully reasoned papers, think about law school… if this were law school we could’ve accepted this. But you’ve gone into a kind of war here… and so this isn’t enough to sustain you.” WW 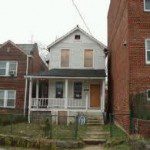 October 13, 2014
Claiming the Body: The Funeral Task as Keeper of the Sacred Words
Next Post

October 20, 2014 Monday Morning Confessional - I Have Royals Fever & The Only Solution Is...
Recent Comments
0 | Leave a Comment
"Look at Christian Scientists, who think that illness is not real."
Nanaverm How to be a Christian During ..."
"Isn't there a verse that says prayer can cure sickness?I wonder how history would change ..."
Christian How to be a Christian During ..."
"If the person who abused you physically, verbally or emotionally does not ask for forgiveness ..."
Judgeforyourself37 Our National Weakness is Our Inability ..."
"fair enough i'm not christian myself anymore either."
Brandon Roberts Religion & Politics: How Being a ..."
Browse Our Archives
Follow Us!