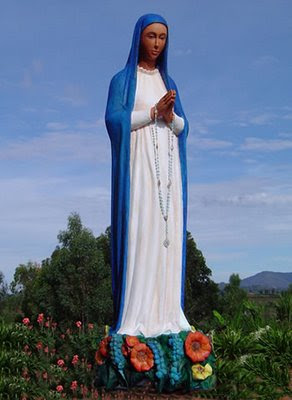 About one year ago I read “Left to Tell” and was completely amazed by Immaculee’s testimony of joy and healing out of so much pain. So when I stumbled across “Our Lady of Kibeho” on my library’s website I ordered it right away.

I picked it up last night, began reading it yesterday morning and finished it after lunch. I’m not sure why I was so sucked into the book. I guess I trust the author having read other books by her and really respecting her faith. And the story is a fascinating one.

Our Lady of Kibeho appeared to several different people calling for prayer and repentance and and also warning of the coming genocide in Rwanda. The story is confirmed by the vast number of people who have been there, and recognized by the Vatican.

Once upon a time, I would have marveled at the lengths Satan was going to. To deceive so many people. But as I read this book, I found myself wondering if it really was the truth. Nothing Mary said contradicted the bible or the church, she was mostly crying out for prayer and healing. There were a few quotes from Mary about “what you have to do to get into heaven” that made my protestant soul cringe. But for the most part I resonated with everything Mary said in her appearances in Kibeho.

I think it helps that I grew up in fairly charismatic circles, so I have always believed that God speaks here and now and that miracles really do happen. So I find some of the appearances of Jesus compelling. Now Mary still puzzles me a bit, why would God choose to send Mary as his messenger? Why not just cut to the chase and send Jesus?

But apparitions like Kibeho and Guadalupe are pretty hard to argue with.

On the opposite spectrum, I looked up the apparitions of Lourdes and Fatima which were mentioned in the book, and I find them pretty strange.

St.Bernadette’s body (the girl who actually saw Mary) never decayed? What is that supposed to mean? And there was some sort of demonic activity at the same location that Mary appeared?

Fatima was even more disturbing to me. This time Mary appeared to 3 small children, saying things like

‘Are you willing to offer yourselves to God to bear all the sufferings He wants to send you, as an act of reparation for the sins by which He is offended, and for the conversion of sinners?’The children were willing to suffer, and even began inflicting self-harm (Doing penance such as refusing to drink water on hot days, and tying rough ropes tightly around their waists) to “suffer for others salvation” which the apparition supposedly approved of. (I don’t know about you, but if my little girl started hurting herself because a vision told her to, you can bet I would be pretty sure that vision was not from God.) And why are all the pronouncements by Our Lady of Fatima called “secrets”, isn’t that kind of Gnostic-secret-knowledge stuff? I just don’t get it I guess.

Oh, and the youngest child’s body never decayed either (what is up with digging up dead people all the time?)

I guess I should just enjoy the apparitions that I do understand, and be happy that private revelations do not form part of the deposit of faith of the Catholic Church and its members are not bound to believe in any of them, since I don’t think I am ready to believe many of them.

In the meantime I heartily reccomend anything written by Immaculée Ilibagiza, and I will continue to read about and grow from the story of Our Lady of Kibeho.

February 11, 2010 Small Successes #9
Recent Comments
0 | Leave a Comment
"As a new mom, even if my daughter is a toddler now, weaning is really ..."
Lynn Toh Weaning my Tandem Nursed Toddler
"So, I came across this post for the first time today, two years after it ..."
Sheila Warner Finally Heard? The Duggar Aftermath
"Just wanted you to know that I keep checking occasionally for updates, and I hope ..."
William Burns Brave New Life: Part 7: The ..."
"> How does that make sense?It saves them lots of money."
Tim Locke How I lost my fear of ..."
Browse Our Archives
Related posts from Permission to Live