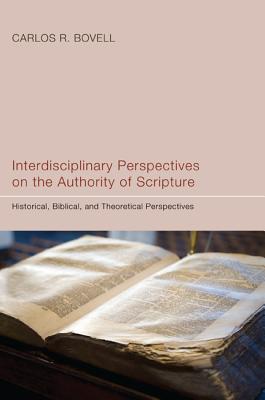 Today and tomorrow we have guest posts by Carlos Bovell. Carlos is becoming a leading critic of the evangelical notion of biblical inerrancy, but unlike other such critiques, his is not the rant of an outsider, but the careful, nuanced, and compelling observations of one coming from within an evangelical paradigm, drawing on his own experience.

His main concern is not simply the intellectual difficulties of this theological position, but the spiritual destruction that occurs in the lives of young Christians when they are given no viable alternative.

Today’s post reflects a bit on Carlos’s own journey and gives the background to his recently published edited book Interdisciplinary Perspectives on the Authority of Scripture (Wipf & Stock, 2011). Tomorrow’s post will be an edited excerpt from his most recent book, Rehabilitating Inerrancy in a Culture of Fear (Wipf & Stock, 2012), a book where Carlos addresses head on the culture wars surrounding inerrancy.

Carlos is a graduate of Westminster Theological Seminary and The Institute for Christian Studies, Toronto. He is also the author of Inerrancy and the Spiritual Formation of Younger Evangelicals (Wipf & Stock, 2007) and By Good and Necessary Consequence: A Preliminary Genealogy of Biblical Foundationalism (Wipf & Stock, 2009).

Writing about inerrancy and evangelicalism has been part of my spiritual journey. I explored some of my thinking about this in my first book, Inerrancy and the Spiritual Formation of Younger Evangelicals. Although I knew that these were only preliminary reflections, I felt that I had made a contribution to addressing the spiritual dangers of promoting inerrancy as essential to Christian belief.

Influential to me early on in my journey was reading some of Bart Ehrman’s accounts of his own struggles with the doctrine of inerrancy, which eventually led to his abandonment of Christianity. Despite my seminary training, I had never before read a firsthand account of someone grappling with inerrancy, and who, despite their best efforts, were not being able to remain committed to it—at least not as it is presently articulated.

I resonated deeply with that struggle, even though I found his responses to be generally unsatisfactory.

where various scholars gathered to talk about textual criticism and its implications for the Bible. Since one of the plenary speakers was Bart Ehrman, I knew I had to hear what he had to say.

During the Q&A, I was able to ask a question of evangelical text critic and Ehrman’s interlocutor, Dan Wallace.

“Why do believers have to wait for people like Ehrman to publish books before we find out about all these problems with scripture, problems that scholars have known about all along?”

Bart Ehrman grabbed his microphone and joked, “Yeah, I would like to know the answer to that!” Everyone laughed. Dan Wallace answered by chiding Christian publishers for not making more of the textual issues known to readers in the Bibles that they publish.

I am sympathetic, but it occurred to me that lack of notes in study Bibles was not the main problem. In fact, textual criticism—though a key factor—is not really the issue, either.

The issue is inerrancy as an ideology and inerrantism as a culture.

This ideology suppresses or minimizes questions that threaten the paradigm, such as those raised by textual criticism.

As the crowd began to disperse, a gentleman approached me and said, “So you’re not a believer, eh?” I was taken aback. I explained that although I used to put a lot of stock in inerrancy, I was now thinking it through and am no longer so sure it is viable.

He hesitated for a moment before giving me his full diagnosis. He informed me that he was a pastor and had met several people like me. In fact, he even had some in his family. He concluded: “Because you have these doubts now, you are not a believer. And since you are not a believer, even though you think you once believed, you have never been a believer.”

I admit, this may be an extreme example—one does not often encounter such confident transparency. But, in my experience, the principle behind this pastor’s reaction to my question opens a window to a problem that goes beyond textual criticism, to the very foundations of evangelicalism: inerrancy.

What is distressing is not so much the doctrine itself, but the collateral spiritual damage that comes in the wake of its uncompromising defense, even against those from within who voice concerns.

The idea for the edited volume, Interdisciplinary Perspectives on the Authority of Scripture, was born out of a concern to bring into open discussion the theological and spiritual problems of inerrantism. The essays collected in this volume are written by a number of specialists in different fields, all coming from various bibliological persuasions.

I thought it would be helpful to illustrate for students how the doctrine of inerrancy can be viewed from more than one perspective and that scripture’s divine authority can be investigated through more than one discipline.

This is the opportunity I hoped to provide for students studying in inerrantist colleges and seminaries who may not be aware of the pitfalls of inerrancy, and who might benefit from knowing that the evangelical playing field is actually much, much bigger than what they’ve been shown.