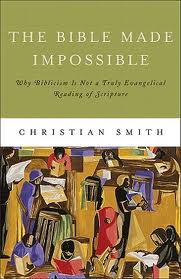 Carlos Bovell is our guest blogger today, and has written numerous posts for us over the past few months on the topic of evangelicals and the Bible. His most recent book is Rehabilitating Inerrancy in a Culture of Fear.

Here he interacts with Craig Blomberg’s recent review of Christian Smith’s The Bible Made Impossible: Why Biblicism Is Not a Truly Evangelical Reading of Scripture

. Blomberg is distinguished professor of new Testament at Denver Seminary, and Smith, a former evangelical, is William R. Kenan Jr. Professor of Sociology at University of Notre Dame.

Craig Blomberg recently reviewed The Bible Made Impossible by Christian Smith. To summarize, Smith argues that evangelical “biblicism” crumbles under its own weight, but continues to survive because of its historical role in establishing evangelicalism’s sociological boundary markers, which explains evangelicalism’s well-documented history of protecting their doctrine of Scripture against perceived attacks.

Smith’s central contention is that “pervasive interpretive pluralism” renders moot evangelical presumptions of the nature and authority of Scripture. Smith means that since the Bible clearly “teaches very different things about the most significant subjects,” and since highly competent biblical interpreters come to very different conclusions about the same texts, evangelical assertions about the Bible’s inerrant authority ring hollow (pp. x-xi).

One of Smith’s most important claims, as I read it, is that in much the same way that biblicism was at the heart of the fundamentalist approach to faith, it has also come to define contemporary evangelicalism. If fundamentalism failed in large measure because biblicism became the main theme of their obscurantist, fundamentalist self-understanding of Christianity, evangelicalism has also condemned itself to failure because it too constructs its identity around more or less the same forms of biblicism, which, in Smith’s analysis, makes the Bible “impossible.”

Blomberg is among a number of evangelical scholars who have recently taken up the cause of giving a fresh defense of the evangelical doctrine of inerrancy (see Do Historical Matters Matter to Faith?: A Critical Appraisal of Modern and Postmodern Approaches to Scripture

), and so one would certainly expect Blomberg to take issue with Smith’s thesis.

Blomberg contends that Smith has created a straw man. Biblicism only describes the approach of “grass-roots pure fundamentalists.” It does not describe the fully up-to-date hermeneutical teachings of the best evangelical colleges and seminaries (the appearance of doctrinal commitments to an inerrant Bible in the majority of colleges’ and seminaries’ statements of faith, notwithstanding).

Blomberg’s response to Smith echoes his recent review of my latest book, Rehabilitating Inerrancy in a Culture of Fear. Blomberg addresses my concerns regarding the damage inerrancy has done to evangelical culture by observing that “a disproportionate amount of the witch-hunting that [Bovell] and I alike rue has come either in truly fundamentalist circles, especially in the South, or in thoroughly Reformed circles.” He goes on to carve out a geographical niche where his vision of a healthy, sophisticated evangelicalism is flourishing, a niche that is “North or West of the Mason-Dixon line or in less reformed circles.”

Blomberg approvingly mentions schools such as Gordon-Conwell, Dallas, Bethel, Talbot/Biola, Wheaton and his own Denver Seminary, while chiding Westminster Seminary and Southern Baptist schools for being too rigid in their thinking. Related to this is an observation Blomberg makes in his review of my first book, Inerrancy and the Spiritual Formation of Younger Evangelicals: “For a variety of reasons, systematic theologians and philosophers tend to get more ‘bent out of shape’ on such issues than scholars who specialize in the original historical contexts of the different books of Scripture.” He also points to the Evangelical Theological Society and the Evangelical Philosophical Society as prime examples of non-biblicism in the evangelical mainstream.

I appreciate some of Blomberg’s points, such as the existence of some latitude in some evangelical institutions. I also agree that the theological agendas of certain Reformed and Southern Baptists elements are a problem. Nevertheless, Blomberg’s assessment of true evangelicalism being more sophisticated is more damage control than a fair assessment of the evangelical landscape.

For one thing, one wonders who is left once these less-than-true-evangelical systematic theologians and philosophers are taken out of the picture and biblical scholars south of the Mason-Dixon Line or Reformed are also removed. Blomberg’s answer seems to be that there is a remnant of biblical scholars out there who have not been unduly influenced by systematic theology or philosophy and who happen to teach in the Northeast or out West.

But does not Blomberg’s rejoinder rest on as selective a population as he accuses Smith of doing? Is this not a straw man of another sort?

Is Smith’s attempt to provide empirical evidence for his claim that evangelicals on the whole are good, old-fashioned biblicists a straw man as Blomberg claims, or is the straw man rather in Blomberg’s appeal to a diaspora of biblical scholars scattered throughout the northeastern and western United States who truly get it? Who really represents a minority view? Smith’s biblicists or Blomberg’s biblical scholars? Readers will have to decide for themselves, but as for me, Smith’s analysis is far more sober than Blomberg’s.

Readers might also take note of one element of Blomberg’s argument that I found to be quite curious and somewhat self-defeating. He lists a number of evangelical scholars who are doing non-biblicist work (“P. Enns, K. Sparks, C. Bovell, C. Allert, and N. T. Wright, to name just the most prominent.”). His point is that, if Smith were more familiar with the evangelical landscape, he would not give such a reductionistic analysis. Blomberg is forgetting, however, that Smith, although now Roman Catholic, is hardly an outsider to evangelicalism, having spent most of his life in such an environment. And the scholars Blomberg lists Smith not only cites but actively incorporates into his book. This indeed indicates that one side is not seeing what the other side claims to see.

More importantly, though, Blomberg is clearly bothered by the type of non-biblicism offered by Sparks and others. He may cite them as examples within evangelicalism when writing against Smith, but Blomberg is part of a larger movement to show that Sparks and others have wandered off the reservation (again, see Do Historical Matters Matter to Faith?). Blomberg can’t have it both ways. He can’t use Sparks, etc., against Smith as examples of the breadth of intellectual evangelicalism and then take part in a volume seeking to defend evangelicalism from the likes of Sparks, et. al.

I urge Blomberg and other evangelical leaders to recognize that the damage caused by biblicism is not confined to the back waters of evangelicalism. It has seeped into its very drinking water with some even mistaking it for the living waters of life.

August 17, 2012
Is the Bible Really Enough for Christian Theology? No (and the Bible Says So)
Next Post

August 22, 2012 The gospel according to the Gospels: It's not a get-out-of-hell-free card.
Recent Comments
0 | Leave a Comment
Browse Our Archives
get the latest from
Evangelical
Sign up for our newsletter
POPULAR AT PATHEOS Evangelical
1

What “The Rise and Fall of...
Between Two Kingdoms
Related posts from Peter Enns

Evangelical
open letter to the apostle Paul from a...
Peter Enns
TRENDING AT PATHEOS Evangelical