Long, Long Ago, in a Land Far, Far Away…. (What I’m Saying is the Bible is Really, Really Old)

This is the eve of a significant event in Jewish history. 2532 years ago tomorrow, August 29, 520 BC, according to Haggai 1:1, God gave the command to rebuild Israel’s temple, destroyed by the Babylonians in 587 BC.

That’s a long time ago, is all I’m saying.

Think about it. Just 1/5 of this length of time takes us way back to about 1500, the days when Europeans were just staring to explore (and exploit) the known world by ship and people still thought the earth was the center of the cosmos.

If we were transported back to those days, only 500 years ago, many of us would probably be dead within a week, unable to negotiate the dos and don’ts of daily life.

Take just half of 2532 years and we are back in the mid-8th century. Vikings

began invading Europe, the stuff of legends. Paper was introduced to the Arabs by the Chinese.

With numbers that large floating in our heads, we tend to forget how large numbers like 500 years, or 1000 years, or 2532 years are when seen from the point of view of our daily human experience.

So, Haggai began urging his countrymen to rebuild the temple over 25 centuries ago. 100 years, 25 times.

Imagine living to be a hundred–and doing that over and over again 25 times. Frankly, I have a hard time

truly “experiencing” in my minds’s eye what just one 100-year span looks like. I am currently watching Ken Burns’s excellent series The Civil War, with photographs of soldiers, wives, children, slaves, buildings, and farmland 150 years old. I am taken by the profundity of how much time has elapsed, how foreign this world is to mine.

And the Israelites began rebuilding their temple 2532 years ago.

This bit of the human drama will forever remain outside of my capacity to comprehend. The distance of it all. I cannot get inside of it. I remain a foreigner to this ancient landscape, and outsider looking in.

I guess my point is this. It seems many of us, myself included, can get a bit careless, even cavalier, about the Bible, thinking that we “get it” because we happen to read it regularly in our native tongue. Perhaps we should regain a sense of respect for the distance this book has travelled to land on our coffee tables and work desks.

Perhaps we should remember that in the Bible we are coming face to face with a very foreign (and small) slice of the human drama–with customs, habits, a whole consciousness, that we do not share–and so we should be respectful enough not to claim for ourselves too great a familiarity.

We can study it and even teach it, as I do. But we kid ourselves if we think we control it.

Perhaps we can try to keep that in mind when we disagree over what it means.  We are all on foreign soil. 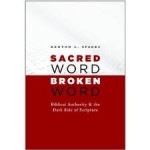