Guess What: Your Presuppositions Don’t Automatically Make You a Better or Worse Interpreter of the Bible 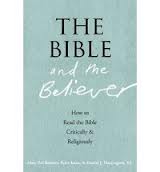 A couple of weeks ago I posted on “3 ways I would like to see evangelical leaders stop defending the Bible.” The third way I was complaining about is the common claim that if one’s presuppositions are false, false conclusions are sure to follow.

I see this not only among evangelical leaders but also now and again among evangelical biblical scholars, especially with respect to inerrancy as the proper and necessary starting point–unless you begin there, you will not come to the proper interpretive conclusions. (See for example John Woodbridge’s foreword to the recent collection of essays defending inerrancy, Do Historical Matters Matter to Faith?

People, of course, will draw their own conclusions. Today, I only want to point out an alternate point of view of the role of presuppositions in biblical interpretation that I was taught in the 1980s as a student at Westminster Theological Seminary.

I had many wonderful teachers in biblical studies, including Ray Dillard, Al Groves (both of blessed memory), Bruce Waltke, Tremper Longman III, Dan McCartney, and Moises Silva. I learned from these teachers a very different way than the defensive posture that has become all too prevalent in recent years, and I am deeply thankful to God for this foundation.

Below are some quotes from Moises Silva, one of my New Testament professors, in an essay, “The Place of

Historical Reconstruction in New Testament Criticism.” The essay appeared in the 1986 volume  Hermeneutics, Authority, and Canon

edited by DA Carson and John Woodbridge (mentioned above).

To be clear, I am not suggesting Westminster of the 1980s is a lone voice in the evangelical wilderness (though Westminster itself certainly has undergone significant theological shifts since those days). Further, I disagree with many of the essays in that volume,  and, though my respect for Silva needs no elaboration, I cannot say I agree on all points of his essay either.

But that is entirely beside the point here. By posting these quotes, without comment, I only wish to pay it forward–to offer a model for a younger generation of students of a sincere, faithful  historical, academic study of Scripture that does not require people of faith to circumscribe their interpretive conclusions at the outset, which seems to be the growing default position.

Chime in and tell us what you think.

“One can hardly deny that a scholar’s fundamental assumptions about God will radically affect one’s handling of the biblical material. Unfortunately, there is seldom (never?) a one-to-one correspondence between those assumptions and the scholar’s historical reconstruction; therefore, to dismiss the reconstruction on the grounds that the basic world view is faulty does not solve our problem (particularly since the faulty presuppositions sometimes open up legitimate options that another scholar may resist due to ‘correct’ presuppositions…)” (p. 124).

“Lapses and inconsistencies of this sort [i.e., a historian talking as though s/he can be completely objective and without preconceptions], however, do not give us sufficient reason to doubt all of [that historian’s] conclusion, or to reject his method, or to abandon his goal” (p. 129).

“The only kind of objectivity that we can sink our teeth into is that which is recognized as such by the community of scholars who evaluate historical interpretations. Asking a scholar to be objective is not a demand that he or she adopt a particular psychological attitude or an acceptable step-by-step mental process. It does mean that the scholar should seek to persuade other scholars who scrutinize any new interpretation according to agreed-upon canons of historical persuasiveness. Such a community process does not guarantee that any one historian will be objective, but it is a compelling force in determining whether a particular reconstruction approaches objectivity” (130).

“Besides, highly idiosyncratic theories – obnoxious and harmful as they sometimes may be – force us to face new questions that can open productive new avenues of research” (130).

“Another item that requires further reflection is the by now commonplace plea for scholars to show a sharper awareness of their presuppositions. The truth is (strange as it may appear to some) that most biblical scholars are not fools; they know fell well there are limits to their objectivity, and their writings generally indicate some degree of self-consciousness as to what those limits are. We cannot give in to the temptation of simply dismissing what we don’t like on the grounds that ‘those liberals’ (or ‘those conservatives’!) are slaves to their presuppositions. Still, there is something to be said for the view that scholars should make a greater effort to identify those premises that provide their framework for selecting, interpreting, and synthesizing the data” (131).