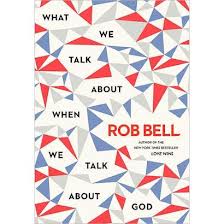 Rob Bell has a new book coming out in March 12, What We Talk About When We Talk About God. Today is February 15. March 12 hasn’t happened yet, because it’s in the future. That means the book hasn’t come out yet.

Still, based on a 2:55 teaser video, some have already gotten ahead of the rush and offered their opinions.

Here is the video.

Here is what I saw.

(1) 0:00 to 0:31–Many people today have trouble with traditional organized religion, yet they also sense some transcendence in the universe.

(2) 0:32-2:29 –Rob talks about his process of writing the book, which includes jotting down idas and phrases on 3×5 cards over many years, how hard it is sometimes to write daily, writing primarily because you need to get it down on paper rather than how people will receive it.

(3) 2:30-2:45–A brief summary of the book: “The book is essentially, God is not behind us dragging us backwards into some primitive regressive state. God has always been ahead of us pulling us forward into greater and greater peace, integration, wholeness and love.”

If you saw something different, let me know.

Based on this, I have general idea what the book is about: introducing God to an unchurched–and for whatever reason unlikely to be churched–population. Other than that I know nothing about what Bell is going to say in substance. I did learn some information on how the book came to be and that Bell likes using index cards to organize his thoughts, neither of which I found terribly interesting or informative about the book itself, and certainly not enough upon which to form a sound basis for judgment.

Based on this video, however, some are offering pre-publication opinions, e.g., Bell isn’t relevant anymore, his book will prove to be “bullsgeschichtlich [sic] Abfall… its own refutation,,, laughable, self-important gibberish,” or yet another ode to Bell’s penchant for “non-truth…error…confusion.”

Please hear what I am saying. Everyone is entitled to their opinion, but a book should be judged by a fair reading of what it says and to whom it is trying to say it, not on a 3 minute pre-publication video that is largely devoid of content read through already formed opinions of past books and strong negative feelings toward Rob Bell.

What I would rather hear his pre-publication critics say is,

I realize that judging a book before I have read it isn’t fair or rational–since I would not want someone to review my own work in this way–but I feel so strongly about Rob Bell’s insidious influence on the gospel that I can’t help myself but get ahead of the game and shoot first and read later. I hated his last book

, where he called into question whether hell is real, and that got me so mad and worried me so much that I can’t bear to see him write another book that might be just like it.

A post like that would be fine, and it has the added benefit of being accurate: it tells us about the reviewer rather than an un-read book.

Let’s hold off opinions until the book is read. Even on the internet, Christians shouldn’t judge a book by its cover. 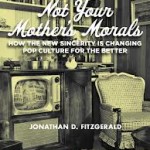 February 13, 2013
Pop Culture is Making the World a Better Place, Morally (yeah, that's what I said)
Next Post