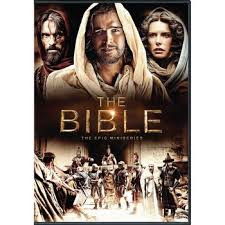 O.K., let’s try to be constructive here. I’m not crazy about the TV series “The Bible” on the History Channel, but neither am I losing sleep over it, and I’m sure plenty of people are enjoying it, learning from it, etc.

But, had I been asked what should and shouldn’t be covered, here’s how I would have done it–and as I continue, keep in mind I know that I know less about TV producing than the people responsible for “The Bible ” know about the Bible, so you can put that criticism back in your holster.

I teach a first year undergrad course at Eastern University, “The Nature and Meaning of the Old

Testament,” your proverbial Bible 101 course. I use as my one and only text a wonderful little book by Victor Matthews, Old Testament Turning Points: The Narratives That Shaped a Nation

Note that 5 of the 8 turning points cover from David to the return form the exile–about 500 years. That may sound boring, but 29 of the 39 books (75%) of the Old Testament deal with this period.

Why so many books for such a relatively brief period? Because most of the Old Testament is concerned about land: getting it, settling in it, keeping it, getting kicked out of it, and in the case of the southern kingdom of Judah, coming back home.

If you think that sounds boring, go ask a modern Palestinian.

Anyway, “The Bible” puts the emPHAsis on the wrong sylLABle. Although the series follows the storyline of the Old Testament, the producers opted to go more with the “big names”–let’s call it “celebrity”–approach to teaching the Bible than than the “stages of the story” approach as Matthews does.

That’s why Samson and Daniel each get their own hour and all we see of  Solomon is him playing with a model of the temple as a boy rather than lingering for a few minutes on how he caused a civil war.  Sheesh.

So, given the precious 10 hours, here’s what I would have done.

I would have given the last 3 hours to Jesus and the book of Acts, ending with Paul’s imprisonment in Rome. Telling the story of the Christian Bible is, after all, the point of the series, and giving about 65 years of history 1/3 of the airtime sounds right to me.

The remaining 7 hours I would divide this way.

Adam (and the flood as a transition to Abraham): .5 hours

Abraham (with Jacob and Joseph as a transition to Moses): 1.5 hours

Moses (go nuts with the plagues and the Red Sea, but don’t forget to linger a bit on Mt. Sinai) 1 hour

David  (leading off with conquest and judges and ending with the birth of Solomon) 1.5 hours

Divided Monarchy and Fall of the Northern Kingdom (beginning with Solomon’s screw ups and ending with Assyrian invasions, include a prophet or two) 1 hour

Fall of the Southern Kingdom and Return from Exile (leading off with maybe Josiah’s reforms, including Babylonian invasion, and return and rebuilding of the temple) 1.5 hours

As a transition to the New Testament, they could talk about the challenges of maintaining Jewish ways of life and frustrated messianic hopes in the centuries after the exile. Then, enter Jesus to redefine Jewish messianic hope.

That’s a lot to cover and the same sorts of adaptations would need to happen as we see in the series now. A lot would have to be left out. Still, it’s better than giving Samson and Daniel about 2 of the 10 hours, dragging out Abraham, and dealing with the post exilic period in literally one sentence.

Thus far Roma Downey and Mark Burnett have NOT returned my many calls and registered letters, but I am sitting by patiently in case they want some input. I’m also available for a cameo.

March 16, 2013
Q: What Do Roma Downey and Writers of the Bible Have In Common? A: Neither Sticks to the Script.
Next Post

Evangelical
a quick announcement about me, and I hope...
Peter Enns

Evangelical
Q: What Do Roma Downey and Writers of...
Peter Enns