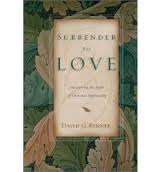 I’ve written many times on this blog about how deep fear of loss of control sits behind heated theological conflict (e.g., here). I recently came across psychologist David G. Benner’s comments on fear, and though he is not talking about theological conflict specifically, what he says is certainly applicable to various situations dealing with disagreement over ideas, ideologies, and especially what one thinks of God. (For an earlier post on Benner, see here.)

To be clear, I am not suggesting that theological disagreement is necessarily wrong or to be avoided at all cost. But when conflict is sought out or even created and the divisions that follow are hailed as the will of God, the true indicator of theological purity and spiritual maturity, I continue to believe that deep fear of being theologically wrong, and thus losing control of one’s personal and group narrative, lies at the root.

In case anyone blew past that last paragraph, let me say it again: the simple presence of disagreement is not an indication of fear. Things like anger, belligerence, win-at-all-costs, and control-of-other are.

I’ve copied Benner’s entire post below (highlights are mine), which is an excerpt from his book Surrender to Love: Discovering the Heart of Christian Spirituality

. I like what Benner has to say about the life of faith, and I recognize myself in these words as much as I do a fair segment of Christian culture.

But fear can be even more elusive than this. Sometimes it can have no face at all. If it is successfully avoided, it leaves almost no trace of its presence. And so those of us who are good at avoiding our sources of fear may come to conclude that fear has no part in our story. But we are mistaken. Fear—though not experienced—is still present and a source of bondage.

Fear works in such a way that the object of the fear is almost irrelevant. Fearful people are more alike than the differences between the foci of their fear might suggest. Fear takes on its own life. Fearful people live within restrictive boundaries. They may appear quite cautious and conservative. Or they may narrow the horizons of their life by avoidance and compulsion. They also tend to be highly vigilant, ever guarding against life’s moving out of the bounds within which they feel most comfortable.

Because of this, fear breeds control. People who live in fear feel compelled to remain in control. They attempt to control themselves and they attempt to control their world. Often despite their best intentions, this spills over into efforts to control others. Life beyond control is unimaginable, even though their efforts at control have only very limited success. Fear also blocks responsiveness to others. The fearful person may appear deeply loving, but fear always interferes with the impulse toward love. Energy invested in maintaining safety and comfort always depletes energy available for love of others.

November 3, 2013
evangelicalism and anti-intellectualism: blame the leaders
Next Post