I stumbled upon a flyer advertising the upcoming Northeast Region meeting in March of the Evangelical Theological Society. The conference title is “The Liberal Seepage into the Evangelical Culture (What Is an Evangelical?).” The first page of the flyer is copied below and all of it is available for viewing here.

This does not represent the best face of ETS.

Where do I begin?

How about with the wonderful choice of an image that, apparently, captures the heart of the conference.

“Wolf in sheep’s clothing” is an common criticism against those who hold “dangerous” opinions for theological conservatives. But the metaphor is intentionally demonizing. It connotes a clandestine, sinister, and therefore slanderous strategy on the part of those deemed “wolves.”

The truth is, those they likely have in their sights are quite open and upfront about what they believe. They write books and stuff –which is precisely why they are noticed.

The choice of image tells us more about the conference organizers than anything else, namely they are operating in a culture of fear

and driven by fear.

Along with the image, every word of the conference title is wrong.

“Liberal” is a scare word that does not remotely describe evangelical insiders and others who find it honorable and necessary to criticize the evangelical system. But, apparently, to disagree is to be “liberal”–being labeled a warlock would get you more slack.

“Seepage” is what sewers do.

“The Evangelical Culture”–there’s only one and we’re it.

“The Evangelical culture” is under threat, and the propriety and necessity of defending that culture’s continued existence is simply a given. Whether said culture is true or the most faithful expression of the Gospel is not up for discussion and requires no deliberation. Ever. It would be like questioning air. This is tribal thinking, and if criticism is blocked like this, the only by-product is insular thinking and intellectual inbreeding.

Still all this would be fine, since we are free in this country to express our thoughts, whatever they may be. But what makes this whole facade crumble is the ETS purpose statement on the second page of the flyer (click link above), which begins, “ETS is a professional, academic society of Biblical scholars, teachers, pastors, student….”

Academic? No. What this flyer, and this conference, represents is anything but an academic gathering for the simple reason that it sees contrary views as liberal seepage and cleverly disguised wolves waiting for the chance to rip the flesh from the bones of the unsuspecting masses.

This flyer was written by an apologetics organization, not an academic one.

And I’m fine with that, but take the word “academic” out of the blurb.

Let me make one thing crystal clear: I know members in good standing at ETS, and good academics, that would be eager to distance themselves from this sort of rhetoric. I make no sweeping anti-ETS criticism here. But this flyer is appalling, bordering on self-parody.

What is needed in an academic conference–including an Evangelical one–is an engagement of ideas, not sheltering. What this particular conference is projecting is, ironically, no different from what any ideologically liberal organization does on secular college campuses or research universities when cloaking propaganda in academic rhetoric.

Oh that the day would come when ETS would explore, debate, and celebrate its beliefs without resorting to such liberal worldly tactics.

What organizations that espouse such tactics do not understand is the high price they pay in the long run for presenting their cause in this way: poeople see through it and leave.

A faith like this, that needs such nervous protection, is not worth giving your life to. That message comes through loud and clear. 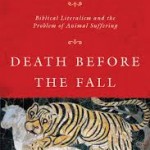