Here is an cartoon that came my way yesterday. I’m sure many of you have seen it (you may have to click on it to see it well). 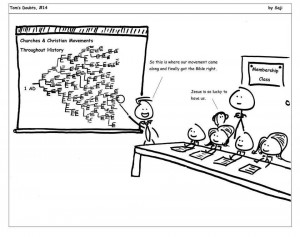 I’ve known a fair number of Christians who think this way about their own denomination, no matter how small–in fact, the smaller the denomination, the more likely one might be to think this way. (And I know in my student days in seminary I felt I was drawn this “chosen few” mentality.)

Most, though, bristle at the notion that one tradition has a corner on the mystery of the Christian faith.

After all, if you keep narrowing things down to your own tradition, you encourage a process of endless theological fine-tuning, that often ends on one very small group (or even one person) within a micro-movement, within a small denomination, within one of hundreds of Protestant denomination, etc., etc., being correct.

And then someone offers you some Kool-Aid–or a special limited edition theological decoder ring. Same thing.

Again, most recognize this is a problem.

So my question for this Monday morning is this: If this sort of narrowing where Christian “truth” is located is wrong, at what point does the broadening end?

If it is wrong for any one micro-element of one Christian tradition to claim exclusive rights to the eschatological fullness of Christian truth, and then we work backwards, at what point do we say, “OK, we’ve crossed the line here”?

I’m talking here not to my atheist or agnostic friends. I’m talking to Christians who are part of some Christian tradition. At the end of the day, do you think it really matters on the level of “truth” what denomination or sub-denomination, or sub-sub-sub-sub denomination you are a part of?

Or, is it all good, and the denomination you happen to be in is an accident of where you were born and the particular path your life has taken?

Do distinctions among Christians ultimately matter–not so much to us, but to God?

?” That’s not a bad question to ask, given the post-Christian world we inhabit.

Feel free to chime in, folks–but only those who have a truly vested interest. Trolls will not be fed (i.e., pass the moderator).