Does the Old Testament predict Easter? (No. Actually, it does more.)

Does the Old Testament predict Easter? (No. Actually, it does more.) April 6, 2015 Peter Enns

In my course on Genesis this spring at Eastern, we are reading an article by Gary Anderson (Notre Dame), “Joseph and the Passion of Our Lord” (pp. 198-215 in The Art of Reading Scripture

It’s a perfect fit for my class, not only because the article coincides with the Lent/Easter season but because it models how Jesus may be “found” in the Old Testament.

I don’t think that Jesus is hiding here and there in a few so-called “messianic prophecies”–and to find him we need to play an ancient version of Where’s Waldo with the Old Testament.

No doubt we see messianic hope expressed in the Old Testament–but that is not at all what we might think of as “predictions” of Jesus of Nazareth being a suffering, dying, and rising messiah.

Anderson models an approach that is not as commonly known among every-day Christian Bible readers.

For the early Christians, i.e., those who did not yet possess a “New” Testament,

the claim of Paul that Jesus died and was raised “in accordance with the scriptures” (1 Cor 15:4) was not just a simple affirmation of faith. It was a challenge to them to pore over the old texts afresh with the goal of laying bare just how and why this is so. (my emphasis, p. 199)

The early Christians were driven to read the Old Testament in a “figural sense.”

Genesis already hints at a figural reading when we see that Abraham, Isaac, Jacob, and Joseph all anticipate Israel’s national drama. (Anderson doesn’t go into detail here, but an example is Abraham’s sojourn into and back out of Egypt in chapter 12, which previews Israel’s later journey.)

As an example, Anderson mentions that Israel is God’s “firstborn son” in Exodus 4:21-23, which invited Christian readers so see what sorts of lines can be drawn between that statement concerning Israel and Jesus as the “firstborn of all creation” and “firstborn from the dead” (Colossians 1:15, 18).

The “connection” here between Old and New Testaments can’t be rightly called “prediction.” And if predictions are all we are looking for, we might miss the–what shall we call it?–echo of this earlier idea in the gospel.

Thinking of Exodus 4 or Genesis 22 “predicting” Jesus sells them short.

These stories have deep meaning in their own right. But what we do see is “patterns” in the Old Testament that the New Testament writers, and (at least some of) the early church writers after them, drew on to talk about Jesus and his significance.

In other words, rather than thinking “Here is where the Old Testament clearly predicts Jesus of Nazareth,” think, “Who Jesus was and what he did was described by these early Christian writers by calling upon Old Testament ‘patterns’ that they believed reached their fullest and final expressions in Jesus.”

So when Paul says that Jesus died and was raised “in accordance with the scriptures,” he is not suggesting we play Where’s Waldo with the Old Testament to look for some verses that speak of Jesus in a predictive way. He is saying “look for these patterns of God’s dealings with his people of old and then see what happens with them in Jesus.”

Which brings us back to Anderson’s article and Easter.

Anderson makes the following point about the Akedah: the election of Abraham as the father of what would eventually become Israel comes at a cost.

Election does not mean living a life of unending blessings; it means being chosen to give up one’s all for God, even what one holds most dear. (p. 204)

The New Testament picks up on this Old Testament story and transposes it–even reverses it. If one only looks for “predictions” of Jesus, then “figurative” readings like this will be missed.

Anderson is building up to the main point of this article, which is the story of Joseph–a story of death and resurrection.

Joseph’s jealous brothers thrown him down into a “pit” (a dry well), then taken down to Egypt, and then thrown down into prison–down, down, down, only to be “raised” and made Pharaoh’s right hand man.

Jacob, Joseph’s father, thinks Joseph is dead–since the brothers tricked him by covering Joseph’s robe in goat blood. For Jacob, when he sees Joseph again, it will be like a resurrection.

The same holds for Jacob’s beloved, youngest son, Benjamin. Jacob willingly but with despair surrenders Benjamin (as Abraham had done with Isaac) to his other sons so they can all go back to Egypt and bring back another son, Simeon, whom Joseph has kept for ransom.

As far as Jacob is concerned, he is handing Benjamin over to almost certain death. But in time, Benjamin and Simeon will be restored to him (as Isaac was to Abraham).

When Joseph finally reveals his identity to his brothers, they come back to Jacob in Canaan to give him the incredible news. Remember, as far as Jacob was concerned, Joseph was a dead as dead can be–he saw the bloodied robe. And now that sadness is compounded by not knowing if Benjamin will be restored to him.

But the brothers come back not only with Benjamin with with news of Joseph. They tell Jacob, “Joseph is still (Hebrew `od) alive! He is even ruler over all the land of Egypt.”

That is the NRSV translation, but Anderson plays off of another meaning of `od and translates it “Joseph is again alive!”

The loss of Joseph is a type of death; his return, as ruler of Egypt, a type of resurrection in glory. Like the apostles, Jacob is dumbfounded (p. 208).

Joseph’s story is a story of death and resurrection, which itself echoes the binding of Isaac episode. Life from death is a pattern in genesis.

Here is the point I want to stress:

The Joseph story is not a “prediction” of Jesus’s crucifixion and resurrection in any sense of the word. And to limit how we see the connection between this story and the gospel as “prediction” is really to under-read the “patterns” in the Bible.

In other words, Israel’s later realities were scripted into their ancient stories.

The gospel writers and Paul follow on this theme by portraying Jesus as returning his people from “exile” (see previously link again), thus being raised from the dead. Jesus’s own physical resurrection is an embodiment (pun intended) and therefore fuller expression of the Old Testament nationalistic ideal.

Anyway, Anderson’s article is quite readable and some of you might enjoy it. If you want to read other 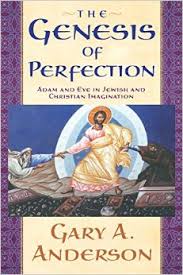 things by Anderson, there’s a lot, but one of my favorites is The Genesis of Perfection: Adam and Eve in Jewish and Christian Imagination

. I read this about 20 years ago and it was one of those “scales falling off the eyes” aha moments for me.

What I value in Anderson, too (as I do in Jon Levenson

whom Anderson draws on a bit

in this article) is his respect for the Bible’s theological dimensions while also working with–not against–historical critical biblical criticism. The two worlds, often desperately kept separate by others, are conversation partners in contemporary theology, as they need to be.

April 1, 2015
open letter to the apostle Paul from a concerned reader
Next Post

April 8, 2015 a brief thought on John Dominic Crossan's new book on the Bible and God's violence
Recent Comments
25 Comments | Leave a Comment
Browse Our Archives
get the latest from
Evangelical
Sign up for our newsletter
POPULAR AT PATHEOS Evangelical
1

Evangelical
brief Bible thought: is there resurrection from the...
Peter Enns

Evangelical
the Bible is like clay to be molded...
Peter Enns
TRENDING AT PATHEOS Evangelical