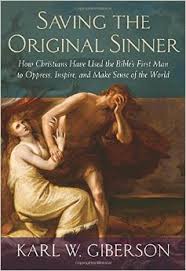 Today’s post is the second of two by Karl Giberson and is adapted from his newly published Saving the Original Sinner: How Christians Have Used the Bible’s First Man to Oppress, Inspire, and Make Sense of the World

Giberson teaches Science & Religion at Stonehill College and is a key figure in the science/faith dialogue. His other books on the subject include Saving Darwin: How to Be a Christian and Believe in Evolution

The challenge of taking “God’s Two Books” (nature and the Bible) seriously has grown dramatically in recent years as genetic evidence has made it clear that Adam and Eve cannot have been historical figures, at least as described in the Bible.

More scientifically informed evangelicals within conservative traditions are admitting that the evidence is undermining Creation-Fall-Redemption theology. Christians have struggled to preserve this central Christian understanding in a way that is faithful to both the Bible and science; literalists have tried to preserve it by rejecting science or making increasingly strange claims about the world.

One of the strangest claims arising out of Creation-Fall-Redemption theology relates to its relationship to possible alien life on other planets.

A couple of years ago the media buzzed about a new planet discovered far from our solar system, Gliese 581g. The new planet was potentially habitable since its temperature was in the range where water is liquid. The news promoted speculation about possible alien life.

Ken Ham, who succeeded Henry Morris as America’s leading creationist, responded that the alien planet would have been victimized by Adam’s Fall: “The Bible makes it clear that Adam’s sin affected the whole universe,” he said. “This means that any aliens would also be affected by Adam’s sin.”

Ham believes that the “Gliesens” would have seen their paradise planet mysteriously wrecked about 6000 years ago when God cursed the creation. The Gliesens would have been happy, immortal, surrounded by docile herbivores. Suddenly, because of an act on a planet trillions of miles away, Gliese would have been stricken with inexplicable suffering, death, and different laws of physics.

And, although human sin on a distant Earth wrecked their planet, the poor Gliesans “can’t have salvation,” says Ham. “Only descendants of Adam can be saved.” To even “suggest that aliens could respond to the gospel is just totally wrong,” he says.

A slightly less strange proposal comes from Hugh Ross and his Reasons to Believe organization, which defends old earth creationism with a day-age reading of Genesis. Ross denies that the day-age interpretation represents a compromise with science, insisting that a careful reading of the entire Bible—and not just Genesis—points clearly to the days of creation being long epochs.

Ross also insists that the Fall inaugurated only human death. Ross goes further. Not only is death a part of the natural order but God ordained it to provide oil and other raw materials useful for humans. The benefits to humanity of these earlier life forms, says Ross, renders their suffering, death, and even extinction a good thing, and not an evil to be explained as a consequence of sin.

The leading intelligent design theorist William Dembski holds the traditional view that animal death is a real evil caused by human sin and not God’s way of making petroleum. Like Ross he understands that science has proven that the earth is very old. So how does Adam’s sin make the dinosaurs go extinct 70 million years before he existed?

Dembski describes his book, The End of Christianity: Finding a Good God in an Evil World

, as an attempt “to resolve how the Fall of Adam would be responsible for all evil in the world, both moral and natural IF the earth is old and thus IF a fossil record that bespeaks violence among organisms predates the temporal occurrence of the Fall.”

The description of the problem is mainstream and one of the reasons why the young earth creationists are forced to reject so much science. But Dembski’s resolution is anything but mainstream.

Dembski proposes that “the effects of the Fall can go backward in time.” He proposes a “retroactive view of the Fall, in which God by anticipation allows natural evil in consequence of the Fall.”

The British biochemist Denis Alexander, offers yet another solution. He accepts the great age of the earth, evolution—including human evolution—and millions of years of death, suffering and extinction prior to the arrival of humans. He also understands that genetic evidence rules out the possibility that the human race ever consisted of one man and one woman.

Alexander embraces key Biblical ideas that play meaningful roles in Christian theology, but he does not insist on literal interpretations. He seeks historical events that lie “behind the text”—events that undergird the theological content of the biblical accounts, but may be quite different from the accounts themselves.

Alexander suggests that the Genesis account is based on an actual historical episode where God reached into history: “God in his grace chose a couple of Neolithic farmers in the Near East, or maybe a community of farmers, to whom he chose to reveal himself in a special way, calling them into fellowship with himself—so that they might know him as a personal God.” (Creation or Evolution: Do We Have to Choose?

Alexander calls these early humans Homo Divinus, “the divine humans, those who know the one true God, the Adam and Eve of the Genesis account.” “Homo Divinus were the first humans who were truly spiritually alive in fellowship with God,” says Alexander. “Homo divinus marked the time at which God chose to reveal himself and his purposes for humankind for the first time.” (Creation or Evolution: Do We Have to Choose?

These ways of construing Adam all have adherents claiming the label “evangelical” in America and yet their views of Adam are all over the map.

In an ideal world the positions described above—and some that construe Adam as a purely literary figure—could be in conversation, competing for the allegiance of Christians trying with integrity to reconcile their tradition with the advance of science.

Christianity, after all, is not a religion about Adam; it is a religion about Christ. Adam can be understood in many ways. Unfortunately, however, the historical Adam has become a line in the sand for many evangelicals, who don’t even want to engage the conversation.

And even those who agree that Adam was historical are far apart with no hope of reconciliation.