There Is No Other: The Radical Message of St. Francis in Jon Sweeney’s New Book 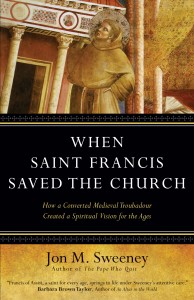 At the beginning of his new book, When Saint Francis Saved The Church

, Jon Sweeney warns that what is to follow will not support the “sentimental” rendering of St. Francis as a gentle animal-loving pacifist. But that’s a bit of a tease. It’s not that he paints a different picture; it’s that he paints one much larger and more significant. St. Francis’ gentle temperament, his interactions with nature, his willingness to work with enemies of the state: these are not the point. Rather, they are evidence of something much more radical: a view of the world in which there is no Other. In seeking to live out the teachings of Jesus, says Sweeney, Francis personified loving everyone as oneself. Every thing as oneself, actually. Francis’ views on outsiders of society, on helping the poor, on hospitality, and on noticing and loving nature are rooted in this deeper stance. Like the Good Samaritan, when St. Francis gazed on another, he saw not tribemate or outsider, not even human or animal, but simply a creature of God; and if a creature of God was in need, then he helped if he could.

So, while it’s not inappropriate to celebrate Francis’ behavior in relation to nature and treasure the “Canticle of the Sun,” let us not (as Sweeney says, recalling Dorothy Day’s warning) “tame” Francis in his sainthood, by defusing him with sentimentality. What a sweet gentle soul. Wish I could be like that… Rather, let us see his life as the gospel in action, and as a challenge to us all to reorder our priorities.

so engaging and accessible is Jon Sweeney’s breadth of knowledge and the many anecdotes and connections he intersperses throughout: a similar situation from another time; a little background on a group or person mentioned. He draws widely from religious history and current thought, popular culture and classics; from the Cathars to Thich Nhat Hahn, T.S. Eliot to Baal Shem Tov.

Sweeney sets Francis in his time and place and helps us understand that medieval setting. This is really the focus of the book: to help us understand Francis. To treat him not as an historical figure, a packaged saint, but as a real person; and to learn from him through this realistic portrayal. A particularly striking example is Sweeney’s explanation of why it’s not really right to call Francis a “nature lover”:

Francis crossed lines time and again, including the well-established line separating the human world from the animal one. His life was about breaking down those barriers.

But Francis was not a lover of nature. To explain or understand his care and affection for creatures in such general terms is to misunderstand how he was able to do what he did and why his true charism (divine gift) was and still is so unusual and so desperately needed. … Francis did not love nature because he never loved anything or anyone in the abstract. … Similarly, Francis did not in fact love ‘people.’ This wouldn’t have made much sense to him at all. He loved that person, he loved this person, he showed his love for Clare, for Leo, for Matteo—the person in front of him at that moment.

Francis was “able to walk in a forest or a field that he’d walked in hundreds of times before, and to experience it in the present,” and he was able to love people and see no one as Other, because he was fully open and engaged. Sweeney uses the word “care” in relation to Francis. He cared about people and animals; he cared for those in need; and he practiced and cautioned carefulness. A modern contemplative might use the fancier word “mindfulness” but I like this simple word, care.

Francis cared about what was in front of him. This present moment awareness kept Francis grounded in reality. Sweeney says,

T. S. Eliot once criticized certain poets by noting how they seemed to think, ‘but they do not feel their thought.’ This is where Francis excelled: he felt his thoughts, and those thoughts were easily recognized in the poetry of his life.

Recalling the anecdote from Thich Nhat Hahn that the main thing he learned in his first year as a monk was to open and close doors quietly, Sweeney underscores the centrality of care in Francis’ actions and his Rule. His almost fanatical caretaking of animals was another instance of his radical presence to both the beauty and the suffering in front of him. When confronted with an earthworm who’d become stranded on a stone path during a rainstorm, why wouldn’t he save its life? But this requires, first, attention, and second, seeing the earthworm as part of God’s Creation every bit as precious as any other. Francis was not an environmentalist; he simply “felt a bond with everyone and everything he encountered.”

Sweeney suggests also that we can learn from how Francis affected change without using the usual tools of power. Prior to Francis, he says, there were two ways religious leaders influenced public policy. The first was to insist political leaders be obedient to their religious authority; the second was to masterfully manipulate leaders from behind the scenes. But while other religious leaders engaged in worldly politics and then retreated to the cloister, says Sweeney, Francis engaged the world at every level:

Francis came along and found his godly work wherever he was — in the village, in the fields, in the midst of an argument between people, with Muslims or soldiers, or while walking with a companion along the seashore. This third way is the key to understanding how Francis was able to see the “other” in his milieu. Simply put, for Francis there were no “others.”

Francis’ influence was also amplified by his personality. Sweeney likens this aspect of Francis to two other historical figures: Gandhi and the founder of Hasidism, Baal Shem Tov. Each of these leaders was engaging and personable, with an “impulsive, instinctual, joyful love for other human beings.” The result, says Sweeney, is that they were not just loved, they were loved like a friend, and this made it possible for them to ask hard things of their followers.

It has always been a worthy endeavor to study St. Francis. We just celebrated the feast of St. Francis in churches across the world with a blessing of the animals, and on that day this year came news of the death of Fr. Benedict Groeschel, founder of the Franciscan Friars of the Renewal and influential modern Franciscan.

But there is a special reason right now. The Catholic Church is in the midst of a process of renewal initiated by a new pope who has named himself after St. Francis. Virtually everything being discussed at the Synod of Bishops right now has to do with whether various groups are seen as Other or as part of the one body; whether they are treated with judgement or mercy; whether they are excluded or included.

This is the first pope ever to take St. Francis’ name. Considering his popularity, this is shocking. But it shouldn’t be surprising really because St. Francis was never a friend of Rome. He existed outside the hierarchy and regularly challenged it. And when his own order got too organized and too cozy with the institutional Church, he turned on it. Why would a leader of that institution take his name? But Pope Francis has done exactly that. And it’s easy to see some of their shared values and attributes in how this pope has behaved: exuding humility; treating everyone equally; approaching every situation with compassion and openness.

So, this is an especially good time to learn more about the beloved saint, and Jon Sweeney’s When Saint Francis Saved The Church

is a great place to start. And if you already think you know Francis, it offers a fantastic new perspective to broaden your understanding.

When Saint Francis Saved The Church

is a selection of the Patheos Book Club.  For other posts about the book, samples, more information or to join the conversation, click here. 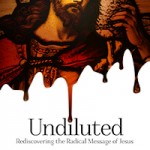 September 15, 2014
Benjamin Corey's "Undiluted" Calls Fundamentalists to Return to Fundamentals of Love and Openness
Next Post