1.  President Obama explained the reasoning behind his push for health care reform in a prime-time presser last night.  He said nothing new, but presented his argument in his usual smooth and eloquent manner.  The only surprise came near the end, when he took a question on the arrest of Skip Gates in Cambridge, Mass.  His response was not surprising in itself; but it was surprising, especially given how carefully controlled his press conferences are (reporters are chosen in advance when they intend to ask questions that the administration wants to answer), that he addressed a hot-button topic that distracted from the substantive matter of the moment.  The next morning, there is more attention in newspapers and television shows to his comments on the arrest than there is to his argument for health care reform.  This was not an effective management of the message–and with 50 percent of the public disapproving of his handling of the issue, he needed to be supremely effective in order to get a bill on his desk before the August recess.  Meanwhile, as RealClearPolitics shows, there is abundant commentary from left and right on the issue.

2.  Speaking of the Henry Louis Gates arrest, I will try to offer a reflection on this later.  Yet it largely depends on whom one believes.  Since the police report has been leaked to The Smoking Gun, one can see that, if the police report is honest and accurate, then there was reasonable basis for a disorderly conduct charge.  It may have been “acting stupidly” from a PR point of view, yet it’s hard to see where officer Crowley acted in a racist manner.  On the other hand, Gates’ account is quite different; if *that* account is accurate, then the policeman was certainly out of line–whether it was a clash of egos, and the policemen arrested him because he was irritated by Gates’ behavior, or did so because of racism, is anybody’s guess.  The White House is now qualifying the President’s comments.  For the full account from Gates, see this interview at TheRoot.

3.  The mechanization of warfare in the early 20th century led to the massive, wholesale slaughter of World Wars 1 and 2.  Now the robot-ification of warfare could actually reduce the number of casualties in armed conflicts.  CNN has an article on the trend.  The interesting question for me–and the question we always try to ask at this blog–is how Christians ought to think about this development.  Presumably we can celebrate that fewer people are put in danger–yet killing could also become even further depersonalized, since it is not one person encountering another on the battlefield but one person, comfortably ensconced in front of a computer halfway around the world, directing a machine to kill someone from afar.  If anyone has thoughts on this, please let me know.

4.  Evidence of the Fall, items #3 and #4: Four boys in Phoenix, aged 9-13, after luring an 8-year-old girl into a storage shed with the promise of chewing gum, raped her.  All were Liberian refugees.  The girl survived, yet child protective services removed her from her home when her parents refused to support her, feeling that they had been shamed by their daughter.  Let’s pray that this poor girl finds a loving home with parents who appreciate her and can support her as she heals from this horrific experience.  Who knows what justice may be when it comes to boys of that age, but we can pray God’s hand will direct the process.  On the other hand, may justice fall heavily on the shoulders of three people arrested in Ohio for letting rats chew the toes off of a six-week old baby girl.

(Yet God can bring good out of evil, as this story illustrates.)

5.  Angelina Jolie, as this interview shows, has come a long way from her wayward youth.  It’s easy to mock the Hollywood adoption craze, but most of these children (except when you tear them away from their unwilling families, which seemed to be the case with Madonna) do need help, and Jolie has been a very earnest representative for refugees around the world.  Sometimes music and movie stars are entirely self-absorbed, and even figures such as Bono and Angelina Jolie surprise me sometimes with their vanities.  But these, unlike so many celebrities with a cause, have really educated themselves on the issues and made a substantive impact for good.

6.  Finally, two excellent ministry articles that I found today.  The first concerns the very difficult matter of ministering to those who are recovering from addiction and similar struggles.  The author discusses “the narrative of ascendancy,” that one becomes Christian and his life steadily improves, versus “the narrative of descendency,” based on Christ’s descent into death and hell. 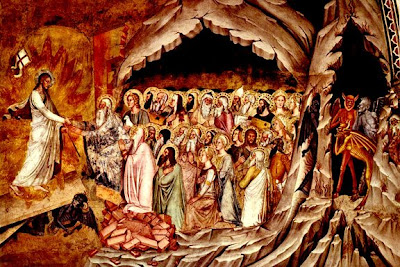 I would rather speak of the baptismal formula of death and resurrection in Christ, but I think it’s well worth reading.  The second concerns prison ministries that reach out to the children of the incarcerated.  Having spent three years myself in prison ministry, I can tell you that there is no greater service you can do for most prisoners (those who care about their children) than take care of their sons and daughters.  Read both.