One Christian’s Perspective on the Day’s News 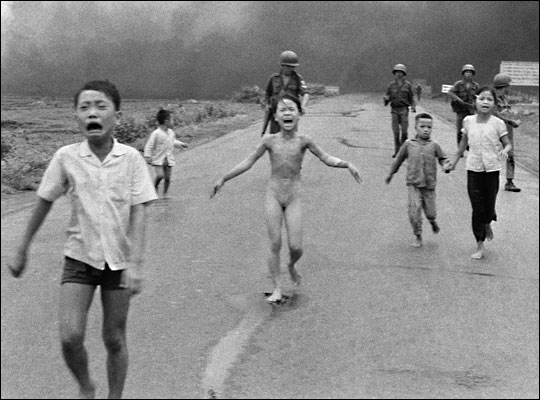 1.  BURNED ALIVE TO BORN AGAIN.  Many are familiar with this picture, where children and villagers, followed by South Vietnamese soldiers, run down a road after an aerial napalm attack.  Her clothes were burned off by fire, and the damage caused by the napalm led her to fourteen months in the hospital and 17 operations.  It would have been worse if a soldier, moments after the photograph was taken (one hopes that photographer put the camera down to help), had not given her water and poured water over her body.  Few know that the naked girl, immortalized in the Pulitzer-Prize-winning photo, converted to Christianity.

Although I suffered from pain, itching and headaches all the time, the long hospital stay made me dream to become a doctor. But my studies were cut short by the local government. They wanted me as a symbol of the state. I could not go to school anymore. The anger inside me was like a hatred as high as a mountain. I hated my life. I hated all people who were normal because I was not normal. I really wanted to die many times.

I spent my daytime in the library to read a lot of religious books to find a purpose for my life. One of the books that I read was the Holy Bible. In Christmas 1982, I accepted Jesus Christ as my personal savior. It was an amazing turning point in my life. God helped me to learn to forgive — the most difficult of all lessons. It didn’t happen in a day and it wasn’t easy. But I finally got it.

Read the rest.  May God give us all such grace to forgive.

2.  BELITTLING RIFQA.  We have followed the story of Rifqa Bary.  I have mixed feelings about the article in Newsweek.  It provides some more information, but its bias is clear, and it does not provide the detailed story I would like to see.  It claims that there is “no evidence” that her parents threatened her life because of her conversion to Christianity.  There is evidence, actually: her testimony, and not only her testimony now but the things she wrote over the course of a year, such as an email that say, “The day has come that I dreaded.  I’m ready to die for my faith.”  What other sort of evidence the writer expects for a private conversation between parent and child is not exactly clear.

The agenda is clear.  The writer has decided that the problem here is not with Muslim attitudes toward conversion and other faiths, but evangelical delusions about violent Muslims.  The author writes, in a parenthetical comment, that “Muslim scholars say that in Islam, there’s no such thing as an honor killing for apostasy.”  This is the kind of religion writing that drives me nuts.  Who are these unnamed “Muslim scholars,” and what do they mean by “in Islam”?  What version of Islam do they mean?  Do these scholars (did Arian Campo-Flores actually consult any?) mean that there is no call for honor killings for apostasy in the Koran?  That may be true; and there are times and places where Islam has been very tolerant of other religions, as in Spain.  Or do the scholars mean that honor killings for apostasy don’t happen in Muslim nations?  Surely that’s the relevant question, right?

A good friend of mine operates a mission-related organization that works in Muslim nations, and they have seen converts killed for their conversions.  These things do happen.  This reporter (Arian Campo-Flores) includes this line, a line which would seem to de-legitimize Rifqa’s concern, with no counterpoint.  Actually over the course of the article it becomes clear that the reporter has concluded, or wishes for the reader to conclude, that Rifqa got a little carried away with her Christian devotion, and bought into misleading anti-Muslim attitudes from conservative Christians.  Yet she’s a very bright young woman, and gives no impression otherwise of having taken leave of her senses.  She clearly felt very threatened, for at least a year.  Whether she misinterpreted her parents’ words and actions or whether her fears are exaggerated, she probably had some reason to be afraid.

Or consider this: “In her affidavit, Bary contends that her father forced her to attend youth gatherings every Saturday at the Noor Islamic Cultural Center in Dublin, Ohio (though the center says its records show she attended only three classes there in 2007).”  It’s unlikely that Bary (in court, with the guidance of a lawyer) would make a claim like this, which could easily be disproven, if it weren’t true.  Has the reporter seen the records?  Evidently not.  Since the center has been accused of radicalism, is it a reliable witness?  Perhaps not.  And are “classes” the same thing as the “youth gatherings”?  Probably not; and if so, did they take careful records every Saturday night?  This is sloppy reporting, but the reporter doesn’t seem to notice or mind, since it’s sloppy in a way that comports with her bias.  She measures everything Rifqa says against “evidence” or counter-claims, but does not do so for the parents’ or center’s claims (if she were interested in that, she would have asked to see their records).  She only treats one side’s claims with the proper journalistic skepticism.

So I will continue to await a good investigative story on the matter.

3.  RCC AND REIKI.  The U. S. Conference of Catholic Bishops has decided that Reiki, a Japanese “healing” art which involves transfers of energy from Reiki practitioners to the bodies of their patients, should no longer be given in Roman Catholic hospitals.  The justification seems pretty sound: “Without justification either from Christian faith or natural science, a Catholic who puts his or her trust in reiki would be operating in the realm of superstition, the no-man’s-land that is neither faith nor science.  Superstition corrupts one’s worship of God by turning one’s religious feeling and practice in a false direction.’’

When I worked for three years with a congregation inside a maximum security prison, many of the brothers there sought to heal me of my neck wound (I broke my neck in a gymnastics accident when I was 19) and the chronic pain it brings.  I don’t mean to deny from the outset the possibility that there may be some people with special gifts from God.  If God is God, then He can do what He wishes, through natural means or in other ways.  But I also know that for many of those brothers their desire to have healing power was more about their desire for religious distinction (the same sort of desire that led Jesus to say that “He would would be first must become the last”), and that it functioned as a sort of superstition for many of them.  The Bishops are right, and I probably should have addressed their motives more directly.  Superstition corrupts worship; superstition forms idols; it leads us to trust in our superstitions and not in God.

4.  NEWER WORLD ORDER.  Obama administration pushes new economic world order.  The US wants exporters like China and Germany to consume more.  I would be happy if China would just stop holding its currency at an artificially low rate.

5.  HE WON’T GO AWAY.  The latest on Manuel Zelaya and his refusal to leave the limelight for the good of Honduras.

6.  SOCIAL INSECURITY.  Democrats objected when the Bush administration spoke of an impending crisis in social security and its solvency.  It may be true that Bush, like Obama with health care, used crisis language too much to create pressure for immediate and dramatic change.  Yet the Congressional Budget Office now tells us that Social Security is going to run deficits in 2010 and 2011, and then deficits will return and grow larger in 2016 and after.  Check out Hot Air for some commentary.

7.  DRIFTING BACK TO 9/10.  As noted earlier, the threat posed by the terrorist cell that was recently disrupted with arrests in Queens and Denver appears to have been substantial and imminent.  It may have involved hydrogen peroxide bombs on trains, and, as it turns out, our rail security has been badly compromised recently by political change, corruption and union squabbling.

9.  OLYMPIOBAMA.  Could Obama bring the Olympics to Chicago?  If so, I would be truly grateful.  While some are already critical of apparent conflicts of interest, cronyism, etc., well, such is the political system we have, and I would just be glad to have the Olympics nearby.  Hard to imagine outdoing the elaborate (and excessive) ceremonies China arranged, though, for its global coming out party.

10.  CROSS-STATE CONFUSION.  If the White House’s position on cross-state competition for health care is unclear to you, you’re not alone.

12.  ACORN FALLING ON OBAMA?  While it’s true, as John Fund writes at the WSJ, that Obama’s ties to ACORN go back decades, and true that ACORN helped get him elected, and true that the Obama administration and Democrats in Congress have helped direct substantial federal monies toward ACORN, and true that some parts of ACORN have seen widespread election fraud problems, I don’t think there’s much here to condemn Obama for.  It’s worth investigating; any political investigative reporter worth his salt should be interested in getting to the bottom of these things, it seems to me that Obama cannot he held accountable for he offenses shown in recent exposé videos.  And ACORN is a many-tentacled animal; as many liberals have said, it should be remembered that ACORN does provide valuable services to the poor.  I would like to see the corrupt elements disciplined and cleansed, and the electioneering parts of ACORN severed from the housing parts.

13.  FEAR THE DANCING REPUBLICAN.  Even liberals are voting for Tom DeLay on Dancing with the Stars.

14.  TODAY’S TWO-SIDES, PT I.  From the Left, Gordon Brown setting forth his agenda for the Copenhagen climate conference.  Bjorn Lomborg has long been a valuable voice in the climate change conversation, especially for his ability to avoid the alarmism and think outside the box.  Yet voices like his have no play in the “shock therapy” approach favored by UN mandarins.

15.  TODAY’S TWO SIDES, PT II.  Bob Herbert from the Left, and Leslie Gelb from the Right, concerning the war in Afghanistan; many on the Right, like Ralph Peters, are ready to wash their hands of Afghanistan and the Taliban and focus only on al-Qaeda (if such a thing is possible).  This is a crucial, pressing, and decisive issue for Obama.  It will, in large part, define his foreign policy.

September 21, 2009
Finding God in Beauty, in the Poor, and in Suffering
Next Post