Winner: Republican minorities.  From Marco Rubio and Nikki Haley to lesser-known figures like David Rivera of Florida and Quico Canseco of Texas, all of whom were victorious on Tuesday.  Other minority Republicans ran and lost, including three Asian-Americans (Tran, Chao, Djou).  The GOP still needs to do a better job of reaching out to people of color, especially African-Americans and Hispanic-Americans, but it becomes less monochromatic everyday.

Loser: Republican women, and women in general.  Carly Fiorina and Meg Whitman had a lot going for them: sophisticated, intelligent, competent, extraordinary experience as entrepreneurs and executives, with loads of money and strong connections in the business community.  At a time of financial peril, with California and Washington facing budgetary crises the likes of which we have not seen for a generation or two, with a maligned President of the opposing party — they still could not get elected.

They made missteps, to be sure.  Neither one is exactly a magnetic personality.  But the liberal elite and their fellow travelers in the media are as fierce in their opposition to Republican women as they are to conservative African-Americans.  Whitman was called a “whore” – and a NOW leader clarified that calling her a “political whore” is okay.  Nikki Haley, another impressive conservative woman, was hurt by unproven accusations of sleeping around.  During a recent visit to Boston, I saw the cover of a Boston Phoenix issue, and it depicted Sarah Palin and Christine O’Donnell in a sadomasochistic lesbian encounter on a satanic altar.

Angle and O’Donnell also lost, and their weirdness (together with that of Michelle Bachmann), played up ad nauseum in the media, arguably hurt the image of the conservative woman.  All were made out to be shrieking harpies.  2010 was billed as the rise of the conservative woman — and especially the conservative Christian woman.  Yet it was tough.  Angle lost by a surprising margin, O’Donnell lost by an unsurprising but very large margin, and Fiorina and Whitman also lost handily.  The Mama Grizzlies and the Mama CEO’s didn’t fare so well.

Democratic women were not treated much better, at least in the conservative media.  Barbara Boxer and Nancy Pelosi were not made out to be shrieking harpies, but they were made out to be cackling old crones.  In fact, the witch image seemed to be pretty omnipresent this election.  Pelosi, the first woman Speaker of the House, lost the gavel.

The only women to come out of the whole mess ahead were Sarah Palin, who helped shape the narrative in many elections, and Hillary Clinton, who is looking more and more like the Democrat who should have been President.

Winners: Jim DeMint and Joe Lieberman.  Jim DeMint established himself as a conservative kingmaker in this election.  Of all the elected leaders of the Tea Party movement, DeMint had the most established Washington power.  Boehner and Mitchell were not exactly Tea Party leaders, and those who were Tea Party leaders (Palin, Rand Paul, Rubio, etc.) were either out of power or had not yet come to power.  DeMint had, from the Tea Party point of view, impeccable credentials, and he had consistently fought against his own party to push it further to the Right.  DeMint comes out of this  smelling like roses.

Joe Lieberman is one of several Democrats (or independents who caucus with Democrats) who would have received a great deal of pressure to convert to the Republican party if the Senate had come out 50/50, or even 49/51.  Since the Republicans cannot seriously believe that 3 or 4 Dems will convert, Joe is safe.  I don’t think he would have converted anyway.  Apart from foreign relations, and especially Israel and the war on terror, he’s a pretty true-blue Democrat.

Losers: Nepotism (for Democrats). Younger politicians with names like Reid and Salazar last their elections.  And do you think Beau Biden regrets not running for his father’s seat?  When Mike Castle entered the race, Beau decided not to.  There was no way he would win, right?  After O’Donnell won the primary, Beau must have been kicking himself.

Winners: Tea Party apologists. If the Republicans had fallen one or two seats short of controlling the Senate, then Tea Parties would have been condemned for helping to elect people like O’Donnell and Angle in the primary.  And one must wonder how the Tea Partiers in those states, who voted in favor of those candidates, are feeling now.  They could have knocked off Harry Reid, and they could have colored Joe Biden’s seat red.

But when Karl Rove said that the Tea Party was unsophisticated, he meant that it was a nascent populist movement and that there is always a learning curve.  The Tea Party is on its own learning curve, and I suspect they will pay a little more attention to electability in 2012.  In any case, Tea Party apologists must also be glad that they no longer have to defend everything that Christine O’Donnell or Sharron Angle say and do.  They were not strong representatives of the movement, and, frankly, the public image of the movement is better off without them.

Losers: California, and California weed growers. The 2010 election just shows how firmly the state of California is in the grip of the public employee unions that have bankrupted the state and crippled its economy.  The Republicans had very strong candidates, in very favorable conditions, and yet they couldn’t close the deal.  The Governator has hurt the Republican party as well, but the greater part of the blame for the appalling condition of California has to fall on the Sacramento politicos who are in thrall to the unions that have made spending cuts and pro-growth measures all but impossible to implement.

Which makes it all the more disappointing that Californians won’t have weed to take their minds off it all.  Just kidding.

Loser: Religious Comity. Finally, attacks on the basis of religion were flying fast and furious over the course of recent months, against Rand Paul, Christine O’Donnell, Sharron Angle, Carly Fiorina, Sarah Palin, Michelle Bachmann, Nikki Haley, and…well, it looks as though all of them were Christian conservatives, doesn’t it?  Hmm.  Many folks on the Left want religion — and especially conservative Christian religion — out of the public square.  More on this to come. 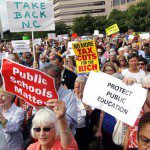