Why It’s Foolish and UnChristian to Call Mormonism a Cult

The Democratic Party is a club for pedophiles.

I’m sorry.  I know that’s a tough thing to hear — and let me assure you, it pains me to say it.  But the truth is the truth, and there’s nothing right or noble or loving in bending the truth.

To be sure, Democrats are not pedophiles according to the standard definition.  But there’s another definition, one that my friends and I use.  We call “political pedophiles” anyone who wants to keep all people childlike and dependent upon government largesse.  Therefore it’s entirely accurate when I say that the Democratic Party is a den of pedophilia and that Democrats are pedophiles.  Right?

Some variation on this argument has been offered by a number of my fellow conservative Christians as a justification for calling Mormonism a “cult” — including, most recently, famed pastor Mark Driscoll.  His essay is actually one of the better treatments of the question that I’ve seen so far in defense of the “cult” designation.  I find much to like in Driscoll.  But this argument fails to pass muster.  Driscoll sets out three definitions of the word “cult”:

But must it?  Because the ESV Study Bible supplies a definition that is unique not only to Christianity, but to a small subset of Christianity, and we are bound to use it over against a world that means something quite different by the term?

There are points I would reject when it comes to Driscoll’s representation of Mormon beliefs.  He refers to websites and books that often pull verses from all sorts of non-authoritative sources wildly out of context in order to make Mormonism appear ridiculous.  He culminates his argument by referring to an author (Hoekema) who interprets Mormon scriptures in a way that no Mormon would recognize.  But let’s bracket those objections for the moment. 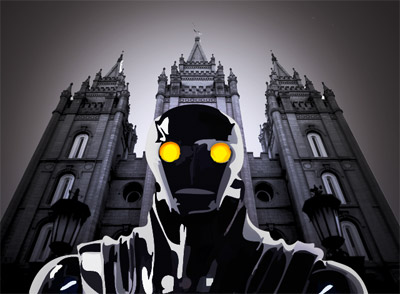 The main problem here is that the Christians defending the claim that “Mormonism is a cult” are employing a definition of ‘cult’ that the rest of the world does not use.  They might as well be saying that all Democrats are “pedophiles” because our group takes “pedophile” to mean someone who wants citizens to remain in childlike dependency upon government.  While Driscoll or Richard Land or Robert Jeffress may intend to communicate that Mormonism is a theological cult, the world hears them saying that Mormonism is a cult in the sociological or popular senses of the term — because those are the only senses of the term the world knows.  So why persist in using the term at all?  Because we want to justify ourselves, and justify the earlier generations of Christians who referred to Mormonism as a cult?  Is that really so important?

If we want to communicate with the world in a way that brings both clarity and charity, then we have to deal with words according to their current meaning.  It profits us nothing to call Mormonism a cult.  It makes us appear paranoid, self-righteous and cruel, and it slanders the good people who believe they are following Jesus Christ in the LDS Church.  According to the popular definition of that term, we are accusing Mormons of being on a level with David Koresh and Jim Jones.  This is inaccurate, unloving, and unChristian.

It’s simple.  If all we mean is that Mormonism claims to be Christian but really isn’t, then let’s call Mormonism unChristian, or false Christianity.  Given the way the world understands the term, it makes no sense to call Mormonism a cult.  Let’s find another word.