There are now, and long have been, two variations on the Christmas theme. There is the version in which Christmas is a largely commercial enterprise. At its best, this version of Christmas is an exercise in generosity and an opportunity to turn away from professional pursuits and remember the fundamental importance of family. At its worst, it is an unseemly weeks-long binge of expenditure and acquisition, an exercise in rank consumerist materialism, where we do not celebrate the power of God so much as we observe and demonstrate our faith in the power of advertising and credit cards.

The other version of Christmas commemorates the entrance of an eternal God into the whirl of time and history, a God who is Spirit and Love into a world of flesh and violence, a God who became incarnate in the person of Jesus of Nazareth, who came to provide the Way and the Truth and the Life for all humankind.

It is this latter version of Christmas on which I wish to reflect. What does it mean? Today, here and now, what is the significance of Christmas? Why has the church over the centuries cultivated this celebration of the birth of Christ? What do the birth narratives, and the very fact of God’s incarnation in Christ, communicate to the world? I will suggest four things: 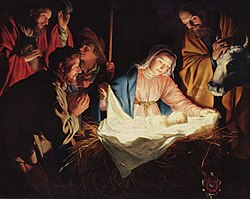 1) In the Christmas story we read the opening lines of God’s love letter to the world.

We often speak of the work of Christ as though God were compelled, by some celestial mechanics of salvation, to do precisely this in order to save us. A blood sacrifice was required, we say, and the only remaining solution was for Christ to become the perfect sacrifice on our behalf. Humankind had to be ransomed, we say, from sin, death, and the devil, and therefore Christ became the ransom.

Yet God was not compelled to do any of this. God Himself is the author and arbiter of all the rules. There is no higher authority above God that forces him to follow regulations or fulfill requirements. God might have annihilated humankind and started over; God might have changed the rules so that no sacrifice and no ransom were necessary. It is not that God could not have done these things; it is that He would not, because God is changeless and just, righteous, and true. All that compels God is His own character, which is not compulsion but self-expression.

Perhaps this is a better way to think of all of God’s work, from creation to incarnation to redemption: it is an extended act of divine self-expression, an unfolding of God’s character. And what is expressed? What is the character of God made manifest in this story?

Love. Like the creation and restoration of all things, the birth, life, and death of Jesus Christ are expressions of a most extravagant divine love. A love that never fails. A love that seeks beyond every river and mountain until the lost sheep is found. A love that will suffer and sacrifice all things on behalf of the beloved, that lays down its life for its friend. The same love that brought us into being in the first place enters, in the village of Bethlehem in the person of Jesus Christ, into a new and more intimate relationship with us. God so loved the world that He sent his only begotten son, so that every person who puts his faith in him will be reconciled to God and brought to live with Him forever.

2) We celebrate in Christmas that God became a person in order to enter into a personal relationship with us.

As I’ve explained elsewhere, there once was a time when I was embarrassed to speak of a “personal relationship with Jesus.” Surrounded by scholars who (I thought) looked down their noses at popular expressions of religious devotion, I spoke not of Jesus but of “Christ” or the “Son of God” or (most pretentiously) the “Second Person of the Trinity.”

I came to realize that when Christians speak of a personal relationship with Jesus they are expressing, albeit in different language, the inward relationship that mystical theologians have enjoyed and explored throughout the centuries of the church. To “walk and talk with Jesus” is to seek the constant indwelling of Christ, a mystical union that is not abstracted from but united with everyday life and all its activities.

That inward union, that personal relationship, is only possible because God became a person. Our most intimate relationship with God, in other words, is only possible because of the astonishing and impossible event we celebrate at Christmas. God entered into our condition. God became one of us, capable of relating to us not merely as Creator and Mighty God but also as friend, as brother, as beloved. The truck driver who imagines Jesus in the passenger seat as he rolls across the plains of Nebraska, the school teacher who asks Jesus for patience as she nears the end of the school day, the worker in the fields of Alabama who talks and jokes and argues with Jesus as he goes about his work, the crippled child who asks Jesus for the strength and courage to carry on — all of these people, whatever their education or theological sophistication, give expression to a profound theological truth that is all too often forgotten: that ours is not only a high and mighty God who fashions the suns and measures the span of the heavens, but a God who dwells amongst the lowly, the humble, the contrite, and the suffering.

It is right and fitting to “walk and talk with Jesus.” Without Jesus, our relationship with God grows cold and abstract, the contractual relationship of a creature to its Creator. With Jesus, the very same Jesus who entered the world in the event we celebrate at Christmas, our relationship with God is interpersonal. It is passionate and intimate, characterized not only by worship and reverence but also by tender mercy and forgiveness, love and mutual understanding. With Jesus, we can know God and be known by God through and through. With Jesus, we have footsteps in which to walk. With Jesus, we have the transformative presence and power of God with us even in our most human and most painful moments.

3) We celebrate in Christmas that God delights in accomplishing the impossible and exceeding the hopes of men, in using the small, the weak, and the foolish things of the world to humble the great, the mighty, and the wise.

Christmas is, among other things, a story of the impossible. God becomes human. The timeless, changeless God enters into history with all its change and variation. The mighty God who created all things humbles himself and becomes a helpless infant. The “reason for the season” is thoroughly un-reasonable. This is not what reason would expect. Reason would tell us that these things are impossible. Yet God loves to explode human conceptions of what is possible. God loves to show us that He is greater — and nearer to us in love — than we had imagined.

Christians should cherish the paradoxes of Christmas, the paradoxes of the incarnation and redemption, and should never deny the many ways in which they are offensive to secular reason. When the first generations of Christians began to tell the tale of God’s incarnation in a manger in Bethlehem, their story was profoundly offensive to the sensibilities of those around them. The notion of a God become flesh, a God who entered the world amid the effluvium of birth, a God who came not as a conquering King or superhuman hero but as a flailing and weeping infant, as a poor carpenter and the son of a carpenter, a God who had to endure all the pains and excretions and indignities of embodied life, and a God who was rejected and tormented and ultimately slain — Jews and Gentiles alike found this profoundly offensive to reason, precisely the opposite of what one would expect.

We should not deny the un-reason of the season. We should not deny that the incarnation is paradoxical and the story seems impossible, even offensive to ordinary human reason. We should celebrate it, for our faith hinges upon it. If ours were not a God of the impossible and the unexpected, a God who overturns the order of the world, then we would still be dead in our sin. And if God did not choose the insignificant, the weak, the foolish, the suffering, and the oppressed, then what hope would we have?

4) Finally, God showed us in Christmas what it means to love.

Christmas gifts are shared in memory of the magi and the gifts they brought from afar. Yet the ultimate Gift-Giver in the Christmas story is God. God shows us, in Christmas, what it means to give. God did not give sparingly and selectively — he gave lavishly to all. God did not require that we first demonstrate our worthiness or earn his affection — he found us while we were yet sinful and brought us grace and forgiveness. God did not give objects and artifacts; he gave himself, restored us to a right relationship with him, and bade us be reconciled with one another. God did not give from a distance; he entered into the trenches with us, into the deepest pits of our fears and struggles and sufferings, in order to be with us, to strengthen us, to redeem us.

God showed us what it means to sacrifice ourselves in love for one another. “If you love me,” Jesus told Peter, “feed my sheep.” The compassion of God is set upon all of his creatures. When we give ourselves, sacrifice ourselves, when we enter into the trenches with one another, when we restore broken relationships and deepen the bonds of friendship and family, when we give even to those who have wronged us or failed us or disappointed us, then we are honoring what God showed us in Christmas. We are honoring Christ, born in Bethlehem, murdered on the cross of Golgotha, who rose into the heights, and yet who dwells even now in the least of these.

These are the reasons we honor the birth of Christ. They are reasons worth remembering.

This was first published here.

December 12, 2011
Conservatives Believe Romney Should Have Passed Up Chance to Make $10,000
Next Post