1.  Dead Accident Victim to be Sued for Flying Body Parts.  I think that pretty much covers it.

2.  A California nutritionist conducted an experiment by placing a McDonald’s cheeseburger out in the open for a full year.  What happened?  Nothing.  Adriana Velez has a funny reaction:

Maybe we should just call fast food “food-like substances.” I mean, why didn’t the CHEESE MOLD?!?…You have to wonder about a food that has 15-32 different ingredients and isn’t a casserole. I mean, what’s going on in there? I knew that most fast food comes from a factory and gets shipped out to individual restaurants just for reheating, but this is crazy. If we don’t call it food, what else do we call it? Plastic chew toys for humans?

3.  The Anchoress Teblo-viates on the funny numbers achieved (all the 316’s, when he was wearing John 3:16 in his eye-black) in Tim Tebow’s most recent football heroism:

No one can possibly know if the freakish numbers accompanying yesterday’s game actually mean anything. Is it God being reassuring? Crafty leprechauns out to distract us from what is more important? Perhaps the numbers game is the underworld distorting issues of faith and prayer; perhaps it is the unwitting result of a collective-consciousness obsession.

Everyone will believe what they like, and we’re all free to. I tend to come down on the story somewhere between Shakespeare and a cockney philosopher: There are more things in heaven and earth than are dreamt in your philosophy, Horatio, and it’s a funny ol’ world, ain’t it?

I love the Anchoress.  But I also really wanted to say “Teblo-viates.”

4.  Corey Feldman promises to blow the lid off Hollywood pedophilia.  Assuming he’s telling the truth, I say, have at it.

5.  I think fellow scholars will agree: this just may be the best footnote ever. 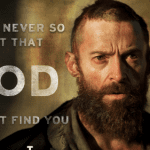