Julie Aftab: My Scars Are “My Jewel, My Gift from God”

She was 16 years old, working as an operator in a tiny, public call office in Pakistan, when a man walked in and saw the silver cross dangling around her neck.

He asked her three times: “Are you a Christian?”

Julie Aftab answered, “Yes, sir,” the first two times, and then got frustrated.

They argued, and the man abruptly left the little office, returning 30 or 40 minutes later with a turquoise bottle. Aftab tried to block the arc of battery acid, but it melted much of the right side of her face and left her with swirling, bone-deep burns on her chest and arms. She ran for the door, but a second man grabbed her hair, and they poured the acid down her throat, searing her esophagus.

So begins an extraordinary profile of Julie Aftab in the Houston Chronicle, a Pakistani Christian whose bravery and willingness to suffer for her faith both inspires and shames me.  She managed to escape from those men, and as she ran down the street, screaming, her teeth were falling from her disintegrating mouth.  A woman came to help, poured water on her and drove her to the hospital.  Yet when the two men claimed (falsely) that she had blasphemed Islam, everyone who had helped her turned against her, and the locals threatened to burn down the hospital if it treated her.

Once she had dreamt of becoming a doctor.  When her father broke his back in an accident, however, the twelve-year-old Aftab left school to work in a sewing factory and help support the family.  And now here she was, sixteen, missing much of her face and most of her esophagus, missing an eye and eyelids, her remaining teeth visible through her melted cheek.

She was angry.  Why had God allowed this?  Her family was being persecuted.  Their house was burned to the ground.  The doctors said she could die any day.  It was not until she appealed to a nearby Bishop that she found a way to come to the United States to receive treatment.  He told her: “If you forgive them, your wound will heal without any medication. You can heal from the inside out.”  Aftab has endured 31 surgeries to reconstruct her cheek, nose, upper lip and eyelids.

I don’t want to quote much more of the profile, since it’s an excellent piece of journalism and deserves all the traffic it can get.  Go read it.

But what I love is her coda.  Like Joseph speaking to the brothers who sold him into slavery, Aftab says of the men who tried to kill her: “Those people, they think they did a bad thing to me, but they brought me closer to God.  They helped me fulfill my dreams. I never imagined I could be the person I am today.”  She now calls her scars “my jewel, my gift from God.”  She hopes to become a pastor and establish a safe house for persecuted girls in Pakistan.  “There is a reason God gave me life.  I don’t want to miss one second of it.”

What man meant for evil, God has used for good.  The paradoxical power of God is to bring good from evil, beauty from hideousness, light from darkness, grace from hatred.  Because God is God, those who love God and know his work in their lives can love their scars.

I understand the sentiment.  My suffering is different from hers in many respects: I broke my neck and suffer chronic pain, but my scars are minuscule compared to hers, and not disfiguring, my suffering is far less severe and I did not endure it at the hands of men for my faith.  Even so, I love my scars.  They’re smoother than the surrounding skin, shining and silvery.

There is something lovely and pure in the unmarked body of a baby or a child.  And I wince whenever one of my daughters suffers a scrape or a cut that might leave a mark.  But my scars remind me of the fires God has brought me through.  They remind me of the trials that have forged me into who I am today.  They have complicated me, made me deeper, but also made me more worshipful.  I cannot remember all the times God has lifted me up if I do not remember all the times I have fallen down. 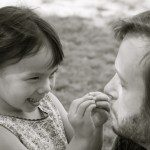 July 13, 2012 Paterno and Sandusky: Why Do We Care Less About the Rape of Boys and Men?
Recent Comments
1 Comment | Leave a Comment
Browse Our Archives
Related posts from Philosophical Fragments