The Three Most Dangerous Words in the World, and the Damnable Lie

Every now and then, we publish an article that seems, all alone, to justify the long work we’ve put into developing Patheos.  If we have created a platform for content like this, if we can help content like this reach a broader audience, then we’re doing something truly worthwhile.

What are “The Three Deadliest Words in the World“?  My father, who had just read the article, posed the question to me over the phone.  I thought, I love you has probably gotten a lot of people in trouble.  Maybe we declare war?  A. G. Harmon, in his excellent essay for Good Letters, a blog of IMAGE Journal, says the three deadliest words in the world today are “It’s a girl.”

And it’s hard to argue against that.  Official estimates of the number of girls who would have been alive today — who were put to death simply because they were girls — at 200 million worldwide.  And that’s only the count for infanticide.  If one included taking the life of the child while still inside the womb, the number would be a great deal larger.  Here’s how Harmon begins the piece: 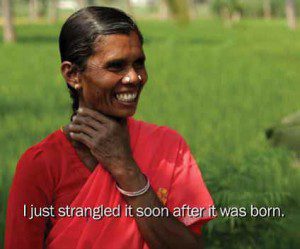 The woman in this picture has just related to a film crew how she killed her newborn daughter by strangulation. She killed eight of her newborn daughters, in fact, and can lead you to the tree-shaded plot of ground where she has buried all of them. The earth is rich there, rounded and fertile. The mound where the infants lie rises over them in a gentle slope, like the swell of mother-flesh.

This woman is not unusual in her Indian village. She and her neighbors explain through a strange kind of laughter the myriad ways that they have dispatched their female children. One of the most common is to dampen a piece of cloth—large enough to swaddle the child in—then lay the wet fabric over the baby’s face, so that she can’t breathe. Other options are to expose the child to the elements or to place her in a box near the river and walk away.

I have to quote the ending, too, but I strongly encourage you to read the post in full.  Here it is:

It is a damnable lie not to call this business what it is.

These girls are being murdered at every stage of life, and those who survive are being subjected to every form of indignity. However tragic the poverty that motivates such a thing, the fact remains. To deny it, to be too uncomfortable to look at it, to be too embarrassed to see it, is to be complicit in it.

There is no problem so great that this kind of barbarism can be the solution, and the salvation of these lives must become a priority for any people who dare call themselves civilized. Otherwise, as Mother Teresa said, the true poverty becomes our own: that any child must die in order for us to live the lives we wish.

Read the whole thing.  Congrats to A.G. Harmon, and to editor Gregory Wolfe, for an excellent piece. 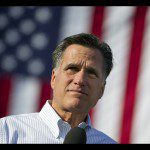