Richard Florida, Patheos/The Jesus Creed: “The math is terrifying. Add the ranks of the unemployed, the displaced, and the disconnected to these tens of millions of low-wage service workers, and the population of post-industrialism’s left-behinds surges to as many as two-thirds of all Americans.”

Kyle Roberts, Patheos/Cultivare: “It’s healthy to be detached from possessions and consumption if that detachment is because we are more securely attached to something greater and more enduring–like God and our fellow human beings.”

Justin Silverman, The Daily: What Would Jesus Shoot?

Owen Strachan, Patheos/Thoughtlife: “Marriage calls for not merely a period of commitment. It calls for a lifetime of commitment. The archetype of wedlock is Jesus Christ and his church (see Ephesians 5:22-33). Christ does not marry his covenant people for a while, while it suits him. He binds us to himself for eternity.” 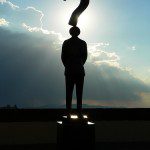 November 26, 2012
Is it Time for Evangelicals to Stop Opposing Gay Marriage?
Next Post