It was my pleasure this week to interview Tyler Wigg-Stevenson, whose book, The World is Not Ours to Save, is really rocking some boats.  Some of my most conservative friends, as well as some of my most progressive friends, have really enjoyed the book, so I was eager to talk with Tyler.  Patheos is also featuring an extended discussion on the book here:

Congratulations on the new book. The reception I’ve seen so far has been highly enthusiastic, across the political spectrum. Why is this the right time for a book like The World Is Not Ours to Save?

I think we’re at a transitional cultural moment for Christianity in public life, particularly in the US, where a rising generation of Christians is emerging from a certain initial innocence with activism and causes.

Over the last ten to fifteen years, the generation that grew up in the 1960s reached the apex of its power, on both sides of the political aisle. Conservatives elected one of their own in President Bush and enjoyed the fruit of that influence. Progressives successfully made the case that this politically lucrative label, “evangelical,” entailed a broader set of public commitments than those held by the Religious Right.

At the same time, the next generation of younger Christians – those who had no memory of, say, the tumult of 1968 – was coming of age, having internalized the message that faith ought to take shape through public engagement. The resulting proliferation of causes was compounded by technologies like Facebook and Twitter, which created the sense that anyone could become a sort of micro-activist, “spreading the word” and “raising awareness” about whatever he or she cared about.

But now the older generation is passing on – as the 2012 election shows, the Religious Right has been demoted from a national to a regional power, at best – and the younger generation is ending what I see as a sort of initial “age of innocence” toward the causes it cares about.

This waning innocence has three aspects and the first two are negative. First, friends in campus ministry tell me about younger Christians’ increasing incredulity toward the sweeping goals promised by movement Christianity – like “ending poverty in a generation.”

Second, people are rightly skeptical about the efficacy of common activist tactics, or means, such as liking a Facebook page or retweeting a message. They’re just too easy, and incommensurate with the causes at hand.

Despite these two trends, however, the third aspect of the waning innocence is an abiding commitment to issues like justice. The passion for a better world is still there, amidst doubt about how and whether sweeping change is possible.

That’s why I wrote this book: to map the practical and spiritual pitfalls that dot today’s landscape, and to cast an alternate vision for establishing a deep connection between an activist spirituality and the heart of a lifelong faith.

What do you see as the leading causes of “cause fatigue” or “compassion fatigue”?

At a surface level, three things. First, the huge number and variety of causes vying for Christian attention and support – how can I decide between them? Second, the overwhelming litany of global misery on display – how can I care enough? Third, the disconnect between global need and individual capacity – how can I make any sort of meaningful difference? Each of these factors pushes us simply to “turn off.”

Going a bit deeper than that, though, I think another real problem is the commodification of causes – which is also the “causification” of commodities – resulting in Christian antipathy toward genuine political commitments.

What I mean is this: today, anything can be a cause. I saw an ad for some soda that said something like, “Drink X, join the movement.” Really? What movement is that? The protest language of the 1960s evolved out of the need to articulate identity and worth for minority-status groups, around race, gender, sexuality. But today, consumerism means that our identities are formed by consumptive preferences: the amalgam of brands and choices that we use to construct and identify our selves. (Incidentally, this is the point of my first book, Brand Jesus: Christianity in a Consumerist Age.) Today’s consumerist identity-formation project has coopted the movement rhetoric of the 60s. But if everything’s a movement, nothing is.

The difference between then and now – and I think that people are not paying sufficient attention to this – is that our cultural logic is shifting from the political to the economic. Genuine political commitments require shared commitment to a common cause, across individual differences. An economic cultural paradigm, however, tolerates nearly infinite fragmentation into niche micro-markets. And that’s why so many causes today seem unsatisfying. They’re often not about a big, audacious, common commitment, but rather are the expressions of one particular community’s preferences, however well-intentioned. The apotheosis of identity politics is the market, a bazaar of causes – and the end of politics altogether.

I can’t help but think of the Franciscan priest Richard Rohr and his vision of the whole of Christian life. There is a “heroic journey” for many young people, especially young men — and setting out to change the world through activism can easily be wrapped up in our own delusions of heroism. You even have a chapter called “Don’t Be a Hero.” For Rohr, what’s critical is how we respond when our youthful vision of religious heroism is thrown down. Do you see it similarly? Does cause fatigue provide a teachable moment?

I’m embarrassed to admit that I haven’t read Richard Rohr, though he’s on my reading list, and your question just bumped him to the front of the line! So, without claiming to speak directly to his work, I’ll just say that the logic of the hero’s journey is as compelling as it is deeply problematic for Christians. For example, the trope of “slaying the dragon” pervades the activist sensibility: what’s the big bad thing that I need to get rid of? But the Christian life is not a call to save the world. It is the proclamation that God has done so in Jesus Christ. And so the hero’s journey for the mature Christian is slaying the dragon inside myself. It is putting to the sword that in me that which hates God, which hates being saved, which wants to be the savior, which loves redemptive violence.

In that sense, yes, cause fatigue is absolutely a teachable moment. Because it’s the moment just after I’ve realized that the world has more monsters than I have swords to swing, and that the most ferocious of all of them is beating away beneath my ribcage.

How does a proper understanding of calling or vocation help? Can you flesh that out?

In the book I talk at length about vocation entailing an acceptance of limitations and finitude. If I’m called to this, I’m not called to that. There’s an opportunity cost to deep commitments. We’re seeing this lived out in the number of Christians who are deciding to pour out their lives in one city, one place. Christianity Today’s “This Is Our City” project tells a lot of these stories, and people like Shane Claiborne in Philly and Leroy Barber in Atlanta come to mind.

Of course, our singular calling is to follow the discipline of Jesus Christ, and in so doing grow in resemblance to his image. But the beauty of an incarnational faith is that this conformity can take billions upon billions of forms. So the question to each of us is “what/where/how has God given me to be?” And starting with that understanding, rather than frantically running from crisis to global crisis, we can discern how it is that each of us might pour out our lives in love of God and neighbor over the long haul.

Hebrews 11 talks about the Old Testament saints “welcoming from a distance” the promises of God. That’s how I think we’re supposed to relate to the coming kingdom where pain and crying and death will be no more. We welcome it from a distance. And that transforms our every today.

Check back tomorrow for Part 2 of my interview with Tyler Wigg-Stevenson on “The World is Not Ours to Save.” 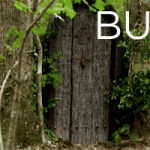 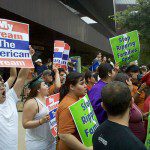