Give This Woman A Medal. 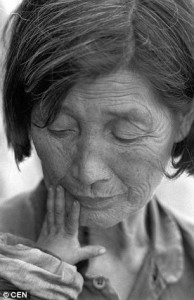 Lou Xiaoying, an 88-year-old Chinese woman is credited with saving the lives of 30 children she found in dumpsters over the past forty years. Her work as a rubbish collector put her in the right place at the right time. Her generosity should inspire us all.

But this story should also be used to highlight the atrocity of forced abortion in China, a story that seems to be gaining traction these days. I, for one, never thought I’d see a headline like “Forced abortions, broken hearts,” in any major US newspaper, much less above the fold on the front page. I’m guessing USA Today surprised a lot of us, regardless of which side of the abortion debate we happen to hold. In the past, these all-too-true stories have been told only by pro-life publications.

So, here’s a thought. Why not honor Lou Xiaoying for her heroic life given in service to those considered nothing more than garbage? It would be a great way to highlight the abuses perpetuated by UNFPA in its support of China’s policy of forced abortion and forced sterilization. And it’s a powerful reminder of the lives directly impacted by such measures.

August 2, 2012 Secretary Clinton Warns of Threats to Religious Freedom.
Recent Comments
0 | Leave a Comment
Browse Our Archives
get the latest from
Catholic
Sign up for our newsletter
POPULAR AT PATHEOS Catholic
1