Good post by an Evangelical pastor, Kevin A. Thompson, whose work I’ve cited before. [Marriage. What Does Peace Have To Do With It & Are We Ready To Do The Work Of Peace?] He writes:

Many people undervalue marriage. This is why I spend a lot of time writing about its importance, pleading for spouses to take it seriously, and highlighting the value which comes when we hold marriage in high regard….

It is an equal mistake to over value marriage—to exalt it above what it was created to be, to expect things from it which it can never give, or to assume it is the answer to life’s greatest questions or needs.

When I was single (and had more single friends), I recall that it wasn’t uncommon to find people who thought that getting married would solve all their problems…possibly the worst basis on which to build a marriage since such expectations will surely be unmet.

It also reminds me a bit of C.S. Lewis who said that Christians shouldn’t go incensing the bed. Yes, it’s a sacrament. Yes, it’s a very important vocation. Yes, to a thousand other good points.

But it isn’t everything. And maybe this is an important discussion to be having as the Catholic Church heads into a Synod on the family which is being dominated by the discussion of failed marriages. Maybe part of the problem has been making marriage more than it can possibly be.

As always, comments welcome below. 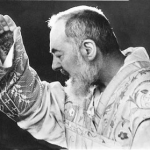 September 25, 2014 To Vaccinate Or Not? Safety Net or No Safety Net?
Recent Comments
0 | Leave a Comment
Browse Our Archives
get the latest from
Catholic
Sign up for our newsletter
POPULAR AT PATHEOS Catholic
1