One of my first experiences with a dark night of the soul period happened shortly after my second child was born. I didn’t have post-partum depression. In many ways, I was energized by having two little ones under two. But I felt my spiritual life withering in the never-ending cycle of diapering, meal prep, and wrestling a baby and a toddler into burrito-like outfits all winter long just to go to the store to buy a gallon of milk. I’d been born again in an era of spiritual disciplines-by-the-numbers: mechanistic formulas for prayer and fill-in-the-blank Bible study shaped my understanding of how I could walk with Jesus. These tools were the training wheels I needed, but I didn’t think I was quite ready to ride without them at the time my kids were born. There was something comforting about being able to check a mental box because I’d completed yet another worksheet or logged some A-C-T-S prayer time.

When that sense of accomplishment was removed from me by a life with little ones that meant I was never going to finish much of anything anytime soon, a sad, wet, gray sense of disconnection from God moved in like a thick fog. And it stayed. Only much later did I realize that those tools had more to do with shining my brittle self-esteem (Look what I did! Boxes checked! Accomplishment!) than they did in teaching me to love as Jesus did. That tutorial came all day long in the form of poopy diapers and snowsuits and ear infections. I didn’t understand that at the time. What I did understand was that I didn’t know who I was any more, and I was scared that maybe I was losing something with God I wasn’t quite sure I ever really had. 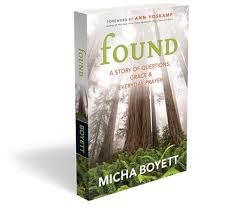 How I wish someone could have pressed a book like Micha Boyett’s shimmering Found: A Story Of Questions, Grace and Everyday Prayer (Worthy 2014) into my sticky palms back then. I haunted the local Christian bookstore, and was well aware of what kinds of books were being published. Most of the “solutions” being offered to young moms like me had plenty to do with redoubling efforts than they did with honesty about the disorientation and reconfiguration that accompanies this life stage.

Boyett faced a double-whammy of transition in her life as she and her husband relocated to a new city with a baby in tow. Prior to the move, she’d made peace with the fill-in-the-blanks faith of her Texas childhood, and had been involved in both meaningful ministry and pursued advanced higher education as an adult. After the move, loneliness and boredom became the gateway to Boyett’s own awareness that her soul was perhaps on the edge of darkness.

Found follows Boyett’s efforts to form and live into a rule for her life that would overlay the rhythms of urban motherhood via classic contemplative spiritual disciplines. The book opens as she wrestles with her prayerlessness at a retreat. After her questions about her state were laid bare through the Ignatian examen, she shares them with the others at the retreat:

“What if those two people in my bed (her husband and son), those two gifts in my life, are not the people who keep me from prayer? What if they’re the actual prayers I’m praying?”

I cry when I say this. I always have a hard time processing things out loud. My tears are inevitably connected to my voice, even among these strangers from Pasadena.

Brother Michael is thrilled by my thought. He immediately chimes in. “Yes! Yes, Micha!” Then he compares me to the Virgin Mother. Shocked at his own insight, his voice rises as he realizes, ‘Christ was her prayer!”

It’s a lovely thought, that God’s grace might extend even into my own prayerlessness, that God might take my meager offering of child-rearing and turn it into prayer, despite my lack of spiritual discipline….I chastise myself for my own cynicism. If only he knew how unholy mothering feels.

I did. I remembered as I read Boyett’s honest and lyric writing. I remembered it all – the moments where I felt my children, my home, my relationship with my husband were the prayers I was praying. And I remembered what it was to be cut off from my habit of worksheets and attempts at hours of prayer that sustained me before the kids came along, not knowing who I was now. Mercifully, never does Boyett lean on the churchy cliches that motherhood is a woman’s highest calling and privilege. Instead, she works to understand her calling as a follower of Jesus (“…I hold a constant, gnawing guilt because I never went to live in Nairobi and work at the orphanage school. I hold the unknown faces of children who no one fed, no one rocked, no one read stories to them because I never showed up for them. Instead I studied poetry.”) and seeks to make meaning through both presence and service to family, friends and the One who was his mother’s prayer.

Descriptive, not prescriptive, this deeply introspective spiritual memoir is not for everyone. But for thoughtful mothers of young ones in the trenches, and for those of us may be friends or mentors to younger moms – we who can still conjure the scent of A + D Ointment by closing our eyes and breathing deeply – Boyett’s writing reminds us that the ordinary everyday is a liturgy if we will put ourselves, questions and all, in the way of Jesus as we shove a toddler’s flailing arms into that winter-weary snowsuit once again.

Note: Boyett’s publisher sent me an Advanced Reader’s Copy. The cost ($0.00) didn’t affect my opinion of the work.

April 30, 2014 President Obama's Greatest Regret - And It Has Nothing To Do With Politics
Recent Comments
0 | Leave a Comment
Browse Our Archives
get the latest from
Evangelical
Sign up for our newsletter
POPULAR AT PATHEOS Evangelical
1

Can You Be a Baptist and...
Roger E. Olson
Related posts from Pilgrim's Road Trip