I’ve heard via the always-reliable Interwebz that as many as 7,000 people have left Mars Hill Church in Seattle in recent months. The implosion in a church doesn’t have to be as painfully dramatic and public as the one in Seattle for a person to leave a broken congregation with a lovely parting gift: at least one piece of new baggage. 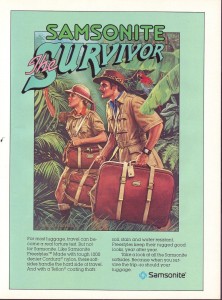 What’s inside that baggage? Hurt, anger, sadness, disillusionment, grief, damaged trust, traumatized faith, and fractured relationships. And you know what? Even a small overnight bag can carry its volume in spiritual kryptonite and weigh as much as a broken heart.

Sometimes, people take their suitcases and keep on walking. They check out of participation in the life of a local church. They may maintain connection with some Christian friends, which can function as a form of church in many ways. Or in seeking to get rid of their luggage – because who needs to go through life schlepping a bunch of useless baggage with them? – they may simply hit the “delete” button on any sort of connection with a local church.

Many of us choose to find another congregation. My husband and I have certainly picked up a few pieces of luggage over the years, and carried them with us as we sought refuge and healing in a new church. (This post talks about the gifts some of those new churches have given us. The sad reality is that some of those new churches added to our baggage collection, rather than helping us unpack the suitcases we were already schlepping.) Though the church is a collection of disparate sinners who each have their own set of baggage they’re lugging with them into corporate gatherings, I’ve noticed that those carrying baggage from previous bad church experiences deal with that baggage once they’re in a new church in some unhealthy ways:

You need a magnifying glass to see this one. The wearer doesn’t want anyone to notice it, and hides it in a tizzy of people-pleasing. It is a variation of the “pay no attention to the man behind the curtain” trick. Volunteering for everything and becoming indispensable as quickly as possible in a new congregation is one way to distract people from the need to be needed packed in that little accessory. No one in the new church would ever suspect pain from an earlier church experience is fueling the carrier of the Nearly Invisible Backpack.

The carrier of this beat-up, travel-weary suitcase has zipped and unzipped this beauty more than one time. A zealot for correct doctrine, the road warrior carrying this particular baggage will trot out his or her satchel full of Truth, always on the hunt for a pure church. This person views him/herself as a missionary and is ready to debate anyone who disagrees with her/his particular dogma, doctrine or opinion. Because this person’s rigid anger at an old hurt often masquerades as righteousness (with no connection whatsoever to the emotional wholeness and maturity that would accompany true righteousness), he or she will stick around at a new church just long enough to cause a rift – or worse, s/he’ll be rewarded and end up in charge of a ministry in that new church.

The person lugging this antique with them has been fighting The Battle Of Their Former Church for years. Or decades. They suffered a near-fatal wound at the hands of an abusive leader, and have been carrying that fight with them everywhere they’ve gone. What happened to them was a crime. The anger over what was taken from them – and the struggle to forgive – are both locked safely in that trunk. In a new church, they may be triggered by things that remind them of the past, and react in the present out of their old, familiar pain. They may even work to try to fix the problems of the old church in the present. I’ve met a couple of people who have gone so far as to attend seminary or Bible school as a form of one-upsmanship in order to show “them”, those ghosts of their old church, that they can do ministry better.

The person carrying this beauty is all about blending into the background in a new church. He or she shows up for services, and leaves when the service is over. At one time, he or she was an active, involved member of a fellowship. But after things went south with those people, the carrier of this neutral satchel comes and goes at his/her new congregation, trying to be unnoticed. It takes a great deal of emotional energy just to show up at a church service. The person carrying the beige camo sack is praying that invisibility will give him/her the space to heal.

The last thing any of these people need is some leader in their new church telling these folks to “just drop the baggage” like a middle school P.E. teacher. If they could just snap out of it, they would have done so already. At one time or another, I’ve schlepped some form of at least three of these pieces of luggage. Maybe I’m still carrying a couple of them, though in significantly lighter form.

When he saw the crowds, he had compassion on them, because they were harassed and helpless, like sheep without a shepherd. – Matthew 9:36

Quite simply, these people need to experience the love of God again. Even when – especially when – their baggage causes them to act as overachievers, bullies, time-travelers or shadows. In my next posts in this series, I’ll take a look at what pastoral care for the baggage schleppers can look like, who should be doing it (Hint: It takes a village, not just the head honcho), and what the cost is to all of us by ignoring this baggage.

Are there any types of baggage you’d add to my list?