When Renee Walks Away: On “De-conversion” Stories

The latest “I once was ‘found’, then I headed for the exit door” tale making the rounds among the Christian internet world is that of George Perdikis, one of the founder of Christian pop band, the Newsboys. Whether it’s stories like that of Bob Dylan, Frank Schaeffer, Katy Perry, or countless others over the last 2,000 years who have elected to walk away from orthodox Christianity, we who stay may have one or both of these responses:

(1) We may chalk it up either apostasy or a belief that the leaver was never truly saved in the first place. The chalk you use will depend in large part whether you’re in the “once saved, always saved” camp or the “only the elect will be saved” camp. This unending debate about whether it is possible to “de-convert” rages on in some Christian college dorms at 2 a.m. For the purposes of this post, let’s just leave it at “Salvation belongs to God”. In any case, those who were once a part of us aren’t with us any longer. We try to find holes in their conversion stories to demonstrate the way in which incomplete, immature, or improper* belief led these Reborn Renees to walk away.

(2) We sorrow. When we look around us at the church, we see problems everywhere we turn. Sometimes, it makes it very hard to see Jesus in the midst of it all. When we read not only the stories of Walk Away Renees, but of those who’ve been deeply wounded but are still hanging on, usually in another corner of Christendom – the person with childhood spent among the fundies now attending a liberal mainline church or the former Catholic now a happy member of an Assembly of God – we ache and wonder how a Church who sometimes behaves like a UFC fighter remotely resembles the pure, spotless Bride described here.

I tend to go immediately to the latter. (No surprise if you’ve been a reader of this blog.) In some cases, I may find myself pondering to whom or what these people thought they were following from the beginning. In the case of George Perdikis, I was struck by what he didn’t say about his conversion. As in, he never mentioned that he had done so. He talked a lot about his desire to play music, but didn’t say anything in this now-viral piece about ever encountering God on the journey. “The choice to become a ‘Christian Rock Band’ was heavily influenced by Peter’s parents, Bill and Rosalie Furler,” he wrote. “As fundamentalist Christians, the only acceptable form of music was the kind that worshipped God. Bill and Rosalie were like second parents to me and, for that reason, I never questioned their advice.”

We followers of Jesus have loved stories of spiritual transformation ever since Rabbi Saul got zapped on his way to Damascus. I never, never tire of hearing salvation stories – or of sharing my own. But I also recognize that it is critical to listen to the stories of Walk Away Renees. They provide for us a harshly-lit magnifying mirror on the way in which we make disciples. Let’s face it – most of us didn’t know what it really meant to follow Christ when we first surrendered to his Lordship in our lives. Whether we were well-catechized on what it meant to be a disciple or our “decision for Christ” happened seemingly on the spot, we can’t possibly know what it will mean to live out our yes to God, except for the ominous-sounding, mysterious words about it costing us our lives. I suspect that even if some of those Renees were presented with this truth, it wouldn’t have formed in them perseverance. (Only actually persevering can do that.) But we all know that we’re coming out of a generation of “just pray this prayer and the blessings will FLOW” easy-believeism that has very little to do with anything the Bible describes about the lives of Jesus’ followers. 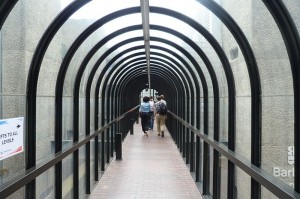 These Walk Away Renee stories also point to another weakness in the way in which some of us approach discipleship. Often, we treat the formation process as a way of creating followers in our image instead of God’s. It doesn’t mean creating spiritual clones or drones, but helping people discover who God has created them to be. This discovery process includes helping people learn and apply the classical spiritual disciplines in order to live out their new life. It also includes helping them flourish in the body of Christ. A growing disciple is free to become more truly themselves, which has sometimes foolishly been perceived as a threat instead of a blessing by those in charge.

Finally, the Renees who once worshipped with us should humble those of us who’ve been left behind, so to speak. There but for the grace of God go we. Some of us who belong to the Shepherd have our own nasty, ingrained habits of wandering, only to be rescued by him one more time…again. It behooves all of us to remember that this may be the case for some of those who’ve noisily “de-converted” themselves, put their heads down and run like the wind as far as they can go.

When you hear a Walk Away Renee story, what is your response?

* Hey look! It’s an outline for a three-point sermon, with bonus points for alliteration!

Did Prince Charles try to force his mother...
My wife and I started Season 5 of The Crown over the...
view all Evangelical blogs
What Are Your Thoughts?leave a comment
Copyright 2008-2021, Patheos. All rights reserved.
Close Ad