Should Christians participate in church-run Seders?

After all, this command to retell and relive via ritual meal celebrating God’s deliverance of his people from slavery in Egypt was given to the Jewish people (click here, here, and here). Yet it has become popular in both liturgical and low-church circles to incorporate a Christian version of the Seder meal into Holy Week observance. Many other congregations will invite ministries involved in doing Jewish outreach to come and do a “seder demo” at other times of the year as a teaching tool for their members and attenders.

In the interest of full disclosure, my husband and I have done both kinds of Seder presentations. In fact, we’ll be facilitating a Seder for a group next Friday night, and we’re slated to do a demo for a small group later in April. We know many in full-time Jewish ministry for whom these presentations at churches are core to their work. They facilitate Christian education, Jewish outreach, and Jewish-Gentile bridge-building, right?

Not everyone in the Church agrees. I’ve run across articles like this one or quotes from books that warn believing Gentiles away from “Christian Seders”:

…out of a well-intentioned desire to understand our Jewish roots, it has sometimes become popular to have the Eucharist preceded by (or even incorporated into) some adaptation of the Seder, the meal that characterizes the Passover. This is not to be encouraged for several reasons. (a) The Seder as it is used today has evolved over centuries and now includes practices utterly unknown in the time of Jesus; hence, we cannot really do what Jesus did. (b) Because of the differing chronologies of the Synoptics and John, and of various other historical issues, it is not certain that a Seder was observed on the evening before the crucifixion. (c) A “Jewish meal” presided over by Christians who will inevitably impose upon it connotations not inherent to it is suspect as to integrity at best; at worst this may produce a very distorted understanding of the relationship between Judaism and Christianity. Devout Jews often take offense at the spectacle of Christians who want to “play at being Jewish ” one evening a year. – Stookey, Laurence Hull. Christ’s Time for the Church Calendar (pp. 92-93). Abingdon Press, 1996.

While Hull is right about how a good number of Jewish people taking offense at Christian adaptations of the Seder meal, the truth is that the Seder has always been open to all kinds of adaptation. Type “Haggadah”, the name of the book containing the order of service for the Seder meal, into Amazon’s search engine. You’ll come up with all sorts of variations on the theme, including a baseball-themed Haggadah, a post-apocalyptic (!) Haggadah, several feminist Haggadot and hundreds of other variations. 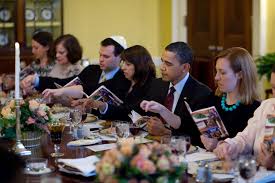 I can affirm the concerns of those who see these Christianized Seders that are nothing more than isolated, ritualized object lessons that serve as a once-a-year field trip into the Old Testament. Without any other context other than the New Testament overlay of Jesus’ adaptations and fulfillment, these Seders sometimes register in the same way a trip to a living history museum does: interesting, but not especially relevant to the way we practice our faith in the Christian community. I appreciate the concerns of those who insist that the meaning of the Jewish Seder gets blurred by overlaying a Christian message onto it, though my own experience with the traditional Seder (which is a combination of what’s commanded in the Bible refined by millennia of rabbinic tradition) points to Jesus in a stunning and profound way. It’s more than OK with me to be able to highlight the connections for those who aren’t all that familiar with Scripture’s account.

I’ve seen some ham-handed versions of Christian Seders led by Gentiles who haven’t done their homework, and they’re painful for me to watch. (Of course, there are Jewish people who march gamely each year through the Haggadah they keep stashed in the bottom drawer of their china cabinet, and aren’t all that well-acquainted with the story they’re telling around the Passover table, either.)  Even so, I believe even most bad Christian Seders do more good than harm. Any attempt at understanding the foundations of the Christian faith moves us away from the way holidays (specifically, Passover and Holy Week) were “observed” in the not-so-distant past.

Rabbi James Rudin notes that this season has been a minefield for relations between Jews and Gentiles. in a recent Religious News Service piece he described what it is like to attend Good Friday services in his role as an interfaith advisor for the American Jewish Committee: “I attend the most solemn Christian service of the year knowing it had often been a day of dread and even death for many European Jewish communities. On some Good Fridays past, worshippers stormed out of churches filled with hatred and venom for Jews. Many preachers riled up their congregations with sermons saying that ‘the Jews killed our Lord,’ the infamous ‘Christ killer’ or deicide charge that has long poisoned relations between Christians and Jews.”

It’s been my experience that a Christian Seder can be a helpful first step that helps believers connect with the foundations of their faith and gain a new appreciation for the Jewish people in a way they otherwise might not:

While I believe a Holy Week Seder or even a Seder demo is a good first step in more fully connecting with the Jewish foundations of faith in a Jewish Jesus, it shouldn’t be the last step. The temptation to trivialize or cherry-pick Jewish-y things from the Old Testament story and/or later rabbinic practice is a minefield and the potential for error or weirdness exists. But I think the more dangerous error comes when we in the church say that that “Old Testament” story no longer matters now that we’re in Christ. A Christian Seder is one small way to confront that great big lie.