At The Intersection Of Time & Eternity: Feast Of Tabernacles

Patheos Explore the world's faith through different perspectives on religion and spirituality! Patheos has the views of the prevalent religions and spiritualities of the world.
The Jewish feast cycle and the Christian calendar each offer an on-ramp into the intersection of time and eternity. If you attend a non-denominational congregation, your church may focus primarily on Christmas and Easter along with non-holiday holidays like Mother’s Day, Father’s Day and Church Picnic Day. If you attend a liturgical congregation, you’re likely familiar with the rhythms of the Church calendar, which recounts the story of Jesus’s life through a yearly cycle of observance. If you have a Jewish background or attend a Messianic congregation, you recognize the distinct cadence of the Leviticus 23 feast cycle and historical holidays of the Jewish calendar.
For those of us who love the Scriptures and the Author of those Scriptures, each holiday in the Jewish calendar and Christian calendar is an opportunity to learn – and then take that learning off the page/screen and consider how to include it in your own practice. To that end, throughout the next year, I’ll be offering a quick “5 W’s and an H” Q & A resource for each holiday or season in both calendars.
The Feast Of Tabernacles (Sukkot) is the next holiday on the calendar. 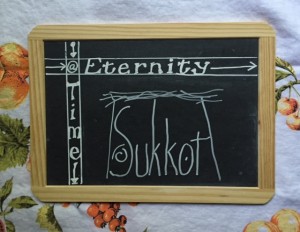 The Feast of Tabernacles is the final holiday in the Jewish feast cycle prescribed by God in Leviticus 23:33-44.

The call to repent of the Feast of Trumpets (Rosh Hashanah) is followed by the Day of Atonement (Yom Kippur) ten days later. Just four days after that, Sukkot begins. This joyous feast required all the Jewish people to gather as one for a period of rejoicing – worship in the form of offerings – and dwelling in temporary shelters known as “sukkahs” or booths as a way to remember the way in which God sheltered his pilgrim people in the desert after he delivered them from slavery in Egypt. This feast also has an eschatological significance for the Jewish people as it points to the end of days when they will be home once and for all, God will be glorified among all the nations throughout his creation, and he dwell among us forever.

Immediately after the end of Yom Kippur, observant Jewish families will erect temporary booth-like structures in their yards, on their balconies, or in any outdoor space they may have available. Most synagogues will erect a booth, or sukkah (soo-KAH; sukkot is the plural form of the word) for the community. These temporary structures aren’t meant to provide permanent shelter. Sukkot roofs are created from branches or other natural material, and must allow those inside a view of the early autumn night sky. Families feast and sometimes elect to live in these boots for the entire feast. Hospitality is a key theme of this festival, which reflects God’s care of his people during the Exodus and throughout history. A second theme is the promise of a new Eden where God will dwell with humankind in permanent, unbroken fellowship. Another name often used for this festival is “The Feast Of Ingathering”.

Scriptures read during Sukkot include the description of God’s glory of God filling the Temple during its consecration and Zechariah’s prophecy of a final day when those who were once enemies of God would celebrate Sukkot. In the end, God will again dwell with humanity in the same way in which he did in Eden.

According to Scripture, the Feast of Tabernacles lasts seven days,  and then, on the eighth day, the people would enjoy a day of rest and rejoicing of the same nature as their weekly Sabbaths.  This final day, known as Simchat Torah (seem-KHAT toe-RAH), which means “Rejoicing with the Torah”, the cycle of Torah readings for the year begins anew in Genesis 1. We taste the promise of complete restoration and new creation in this final feast day of rest and new beginnings. This final Biblical feast in the yearly cycle captures both the pilgrim state of God’s people and their hopes for a promised Messiah.

This holiday’s focus is extremely relevant to Christians as well, who believe Jesus was the Messiah, and will return to the world he loves and is redeeming to reign as King.  Followers of Jesus can follow the flow of the Feast of Tabernacles through the New Testament. It is not an accident that the gospel of John uses the language of sukkah, tabernacle and temple to testify to Jesus: “The Word became flesh and made his dwelling among us. We have seen his glory, the glory of the one and only Son, who came from the Father, full of grace and truth.” (John 1:14) The Greek word (skenoo) used here for “made his dwelling” means “to tabernacle”. In the final movement of the book of Revelation, John uses language to describe the end of days that echoes Ezekiel’s “dry bones” promise: “And I heard a loud voice from the throne saying, ‘Look! God’s dwelling place is now among the people, and he will dwell with them. They will be his people, and God himself will be with them and be their God.’” (Revelation 21:3)

You can learn more about the background of the feast here and here. Fellowship with friends, family and strangers alike is at the heart of this time of hopeful celebration. Check out delish recipes for Sukkot here and Simchat Torah here.