At The Intersection Of Time & Eternity: Holy Week

The Church year has a sweeping rhythm to its seasons: Advent moves into Christmastide, then Lent. But in the days leading to Good Friday the rhythm slows; it’s the sound of a ticking clock in an empty room. Every tick, eternity in 60 seconds.

This week, the calendar invites followers of Jesus to trace his footsteps into Jerusalem to the tick of the clock. Each day of Holy Week brings us into this journey in the here and now. It moves us from our hazy 2,000 years’-distant vantage point into the crowd that welcomed Jesus with palm branches and cheers to the Holy City, and won’t let us leave until we track in the darkness behind the women carrying spices to prepare his body for burial the following Sunday.

The Jewish festal cycle and the Christian calendar each offer holidays that are meant to serve as an on-ramp into the intersection of time and eternity. These moments and days point us beyond our own everyday agendas and connect us with our place in a bigger, more beautiful story. I’ve been blogging a 5-minute intro to each major holiday and season in both the Jewish and Christian calendar. Today, I’m offering an overview of Holy Week. 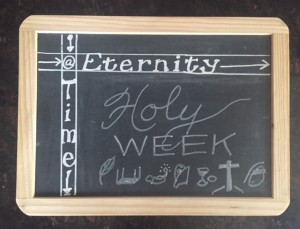 Holy Week is technically the final week of Lent, but the focus shifts during this week from the individual introspection to an active pursuit of Jesus through the last days of his earthly ministry. The three days before Easter (Maundy Thursday, Good Friday and Holy Saturday) are stand-alone days in the Christian year focused on the final words and acts of Jesus, his suffering and passion, and his burial. The Holy Week observance of Eastern (Orthodox) Christians usually occurs a week or two later than Western observance, but the nature of the week remains the same.

In the Ancient Near East, a king coming in peace to a city might demonstrate his intentions by entering it on the back of a humble, trusty donkey instead of a military horse. Without a word, Jesus responded to the Messianic hopes of the people in Jerusalem who expected their Savior to demonstrate his military superiority over the Romans with a show of strength. Palm Sunday demonstrates how our expectations may blind us to what God is doing right before our eyes.

Palm Sunday services in many liturgical congregations are both celebratory and somber in nature. Congregants wave palm or other leafy branches, and chant or sing their hosannas. Yet Scriptures read during the service focus on the tension of Jesus’ arrival in Jerusalem, as well as passages highlighting his obedience and humility.

In most church traditions, the next few days of Holy Week are given to individual prayer and contemplation as we follow Jesus’ movements around Jerusalem during the final days of his life. Some traditions (Catholic and Orthodox) have special foci for each day’s worship service.

Jesus entered the temple courts and drove out all who were buying and selling there. He overturned the tables of the money changers and the benches of those selling doves. “It is written,” he said to them, “‘My house will be called a house of prayer,’ but you are making it ‘a den of robbers.’”

The blind and the lame came to him at the temple, and he healed them. But when the chief priests and the teachers of the law saw the wonderful things he did and the children shouting in the temple courts, “Hosanna to the Son of David,” they were indignant.

“Do you hear what these children are saying?” they asked him.

Malachi 3:1-5 describes a “messenger of the Covenant” who will come to purify and refine God’s people so they will again worship him wholeheartedly. Jesus disrupted both commerce and religious practice as he overturned merchants’ tables in the Temple, then healed blind and lame ones.

Tuesday: Jesus Warns His Friends and Speaks To His Enemies

The Eastern (Orthodox) churches focus on Tuesday of Holy Week on calling followers of Jesus to stay watchful and ready for the arrival of the Bridegroom. As an eleventh-hour warning to his disciples, Jesus told the parable of the ten virgins. Jesus shared this story in the context of the events recorded in John 12:37-50. Jesus diagnoses the hard-hearted condition of those religious leaders who refused to recognize what God was doing in their midst through him. This act scandalized and radicalized Judas. He decides to turn Jesus over to the authorities.

In the Western church, this day has been dubbed Spy Wednesday. The focus of the day is Judas’ act of betrayal of his friend Jesus. In the Eastern (Orthodox) Church this day is known as Holy And Great Wednesday. Worshippers on this day in these congregations are directed to the example of the unnamed woman who performed an extravagant act of worship by anointing Jesus at the home of a leper named Simon. Betrayal or worship? Which choice will we make?

At this point of Holy Week, we follow Jesus up into the city for his final hours. He is about to simultaneously celebrate and become the Passover.

The final three days of Holy Week include Maundy Thursday, Good Friday and the Great Sabbath. Though these days are technically part of Lent, they have long been treated as a single, separate event in the Christian year. In the Western Church, this period is known as the Triduum (TRI-doo-um, derived from the Latin for “three days”).

The Triduum incorporated the way in which early believers readied themselves to celebrate the resurrection each year. These spiritual preparations included the pre-Pasch fasts for and by new believers who’d join the church in baptism. They also incorporated the church’s custom of all-night vigils, or prayer watches, leading into a time of resurrection day rejoicing at daybreak.

In the beginning, these practices grew organically out of the community’s response to the work of the Holy Spirit among them. They became formal rituals as early believers expanded on them to encompass and memorialize the final movements of Jesus’ life. Today, though each of the three days of the Triduum have different types of emphases, it is most helpful to understand them as a single movement in three parts.

This day is given to remembering the events of the final night Jesus spent with his disciples. Jesus gathered with his disciples for a Passover meal, and adapted its elements in order to demonstrate for them what he’d come to do. He washed his disciples’ feet, he infused cup and matzo with new meaning, and he gave those gathered with him a clear and specific commandment to love one another the way he loved them. The name Maundy Thursday comes from the Latin word “mandatum”, or commandment.

While Maundy Thursday services in the Western Church vary by tradition, they tend to be focused on foot washing, communion, and, in some churches, draping the cross in a shroud of fabric and stripping of the linens, communion vessels and decorative elements adorning the altar. The latter offers worshippers a vivid visual representation of what was set in motion when Christ was arrested at the end of this night with his disciples.

Some congregations expand communion this night to be a full Passover Seder meal that highlights Jesus’ words and actions – something I highly commend to you! Others include a foot washing ceremony into their Maundy Thursday worship gatherings.

When Eastern (Orthodox) Christians receive communion during the day they call Holy Thursday, they pray this prayer: “”Receive me Today, O Son of God, as a partaker of Thy Mystic Feast; for I will not speak of the Mystery to Thine enemies, I will not kiss Thee as did Judas, but as the thief I will confess Thee. Lord, remember me when I comest to Thy Kingdom.” It is a prayer worth contemplating today.

The One who was heralded as a hero days earlier was rushed from one kangaroo court to the next before he was sentenced to death by crucifix between on a killing ground outside the city known as Calvary, or Golgotha. The grieving of Lent moves us toward the most solemn day of the entire Christian year. It is a day of deep mourning, though we do not grieve as those who live without hope. Good Friday seems anything but good if viewed as a single, tragic event. But this day is the day in which a good God worked out his divine plan of redemption for his broken, beloved creation.

The Stations of the Cross, typically fourteen images highlighting Jesus’ journey from his “trial” before Pilate to his crucifixion and burial, came out of ancient Good Friday devotional observance. The Stations of the Cross are often associated with the Catholic Church, but a number of Protestant traditions have developed their own approaches to this this worship aid. Other churches form liturgies based on the seven words/phrases Jesus uttered on the cross.

Holy Saturday, or The Great Sabbath

On Holy Saturday, we wait. We feel the weight of the events of Holy Week, and we realize that though it is Shabbat, we are not at peace. Not without Jesus.

In most liturgical traditions, this is the one day during the year in which communion is not offered as part of a corporate worship services. In ancient times, an overnight vigil beginning on Saturday night would bring worshippers to the day that split history in two: the resurrection. Today, sunrise services taking place on Easter morning are a nod to that vigil.

If you are presently involved in a Church with a rich tradition of Holy Week observance – or have been in the past – what elements have been most meaningful to you?