So, things are a tad crazy in this dear old world of ours, especially for people who live on the Eastern seaboard of the US and the Boston region in particular. It’s not only the violence and the insecurity that brings, but then the What! Chechnya? element of apparent randomness and the unknown. Not what was expected. Or even dreamt of by many. So why this horror at all, and why now? Can astrology shed light?

Here is the chart for the bombings:

There’s a lot that can be said about this chart but I will be selective and point out the major bits.

A quick look shows us Saturn and Uranus exactly inconjunct at 9 degrees, an aspect of great tension, and a reiteration of the astrology of the Sandy Hook massacre.  They are in the two signs ruled by Mars, the planet of aggression.

Mars shows up again, conjunct the Sun, a collaboration of great energy and demand that extends from March 20 to May 20 this year. We have been through the most combustible time, when the Sun and Mars were together in Mars-ruled Aries from March 20 to April 20. (Note: this is the first time they have been conjunct in Aries since March/April 1981. Reagan was almost assassinated on March 30 that year in Washington DC.) The Sun and Mars remain close together in the sky until May 20 though, so this is still potentially a time of violence and aggression.

Mercury rules this chart, (Virgo is rising), and can be seen heading towards the conjunction with Uranus, an aspect that signifies radical thinking that at best emerges as inspiration and invention; at worst, the rationalisation of the use of violence for political/ideological ends. Mercury/Uranus inconjunct Saturn in Scorpioindicates intellectual justification for vengeance.

Neptune on the descendant signifies the deception and complete unexpectedness and sense of violation in the nature of the target and timing. It suggests that the perpetrators were not only deceivers but also themselves deceived by false thinking. And it may take some time to determine who really was behind this horrific event.

Plus, this event occurred just as our cosmic friend the Uranus Pluto square, bringer of deep change, comes into orb of the third pass (of a total of seven between 2012 and 2015)  exact on May 20 at 11 degrees 14 (UR direct, PL retro). (Note: This aspect signifies a very difficult period in world history from 2011 — 2015.)

Plus, we are moving into a major eclipse phase just when the Uranus Pluto square is coming to exactitude (May 20). Eclipses throw an influence over the preceding month and the aftermath of the eclipse season. The aspects made by the Sun and Moon on the eclipses tells us how difficult or easy they will be. This bunch is tough:

All these hard aspects (conjunctions, squares, inconjunctions, and oppositions) and especially the recurring appearance of Saturn and Mars (the two planets the ancients considered to be malefics, especially at the mundane macro level) signify a period of violence and tough lessons.

Why is so much violence happening in the US ? To understand this we have to look at the US progressed chart, in which the progressed Sun at 8 Pisces is now squaring natal Uranus at 9 Gemini, signifying shocks this year. At the time of the Sandy Hook massacre this aspect was activated by Pluto, Jupiter and Saturn. With the Boston bombings, Saturn and Uranus were activating it, exactly inconjunct at 9 degrees, both in the Mars ruled signs of Scorpio and Aries respectively. And as with September 11 2001 bombings, the ascendant/descendant axis of the US Sibley chart is highlighted, with Jupiter now exactly where Saturn was then, at 14 Gemini, this time inconjunct Pluto and Saturn (in 2001 Saturn was opposing Pluto across that axis). Strange but persistent echoes here.

So what can we do during such difficult times? As much as you can, STAY OUT OF TROUBLE! Use the radical nature of these aspects to clean up your own act, give away or throw out what you no longer need, move into a higher gear in terms of your contribution to the collective. Beware of venting anger and creating more bad karma. It is a really tricky time, best used for out of the box thinking, and radical ventures that aim to better the lot of humanity, but of course, the shadow is always present, and with this collection of influences there is the potential for wanton destruction fuelled by ideology and ancient pain. (Note: Saturn and the South Node are coming ever closer together in Scorpio, the sign of vengeance.) Read my piece on the astrology of 2013 for more detail on the big picture. Stay well and safe. Love and blessings to all. 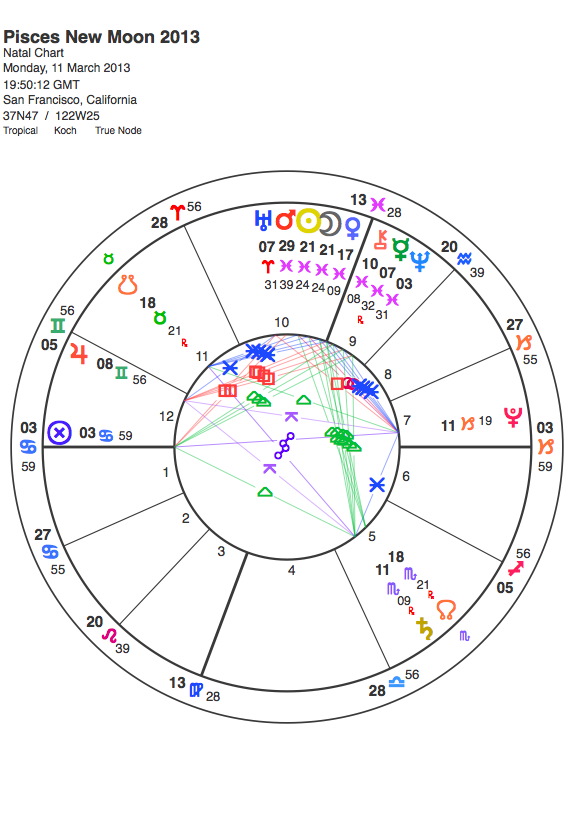