Devil’s Breath: A Trick of the Nightshades

The plants traditionally associated with witchcraft have shared infamous reputations and prominent places in myth since antiquity.  They have been used in politics, medicine, and magic by diverse groups throughout history.  There are four plants within the same group that are quintessential to the lore of the witch.  Belladonna, Henbane, Mandrake, and Thorn Apple; are the most commonly mentioned in myth and medicine.  They belong to the genus Solanaceae and the family Solanum; commonly known as Nightshades.  These plants contain substances that have a powerful reaction on our physiology.  These naturally occurring chemicals, which often serve no purpose for the plant are known as tropane alkaloids.  Tropanes including Atropine, Scopolamine, and Hyoscyamine are characteristic of these plants and are used today in modern medicines.  Historically, Belladonna and Henbane have been used in ointments and liniments applied topically for pain.  Mandrake was combined with Opium to create a powerful anesthetic used by medieval physicians.  Relatives of European Thorn Apple or Datura were used in South America and Central America to create an amnesic effect that was utilized during childbirth to dull the pain and cause the patient to forget being in pain.  These herbs have held the chemical components for many modern medications still used today.

Their practical use and growing prominence in modern witchcraft continue the ancient connection with these powerful botanical allies.  The lore surrounding these plants continues to grow and transform as we gain new insight through direct communion with these plant spirits. However, modern advances in the synthetic reproduction of these chemicals has created a dangerous tool in the wrong hands.  These powerful alkaloids in their natural state have resulted in many negative experiences and sickness in those seeking recreational highs by exploiting these sacred herbs.

Scopolamine is one of the alkaloids of the Solanaceae genus.  It is used today in medication for motion sickness, and is generally applied in the form of a patch.  Oftentimes these patches are worn by tourists traveling abroad, leading to increased intoxication and amnesia when consumed with alcohol.  Scopolamine powder is accessed by certain individuals who have used it as a means of committing a number of crimes.  Scopolamine poisoning allegedly results in a “zombie like” state during which the victim is easily manipulated.  Afterwards the poison causes amnesia leaving no memory of the previous events.  These qualities would make Scopolamine a perfect tool for thieves and predators of all kinds.

Devil’s Breath, as it is appropriately called is a powdered synthetic scopolamine allegedly used in Europe and South America to conduct robberies, kidnappings, and sexual assault.  The powder is either slipped in a drink or blown in the face.  This is where it get’s its name Devil’s Breath.  Coincidently all of the plants within the Nightshade family have associations with the Devil.

This substance was  allegedly studied in WWII for its use as a truth serum.  Scopolamine is very concentrated in its pure synthetic form.  It can take less than a gram of the substance to kill a person.  This alkaloid is present in all of the plants within the Solanaceae genus, however it is most infamously known as the active alkaloid in the Daturas.  Devil’s Trumpet whose white flowers point up towards the heavens from below are also called Thorn Apple or Jimsonweed.  While these varieties contain the same alkaloids, Devil’s Trumpet is more commonly known to the witch with a European background.  Sacred Datura, Datura stramonium and Datura inoxia were used in Europe and more commonly in South and Central America.  Another relative of the solanaceae family is Brugmansia, or Angel’s Trumpet.  Simillar to Devil’s Trumpet, these large white flowers point down from the heavens towards the Underworld.  This genus is native to South and Central America.  It has many similarities to other varieties within this group, and is of particular ceremonial use to South American shamans.  Brugmansia suaveolens, one of seven Brugmansia varieties, is used as an ingredient in sacred Ayahuasca ceremonies and supplies the scopolamine necessary for criminal poisoning.  Alleged cases of scopolamine poisoning have been reported in Europe and South America. 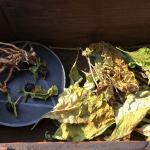 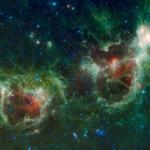