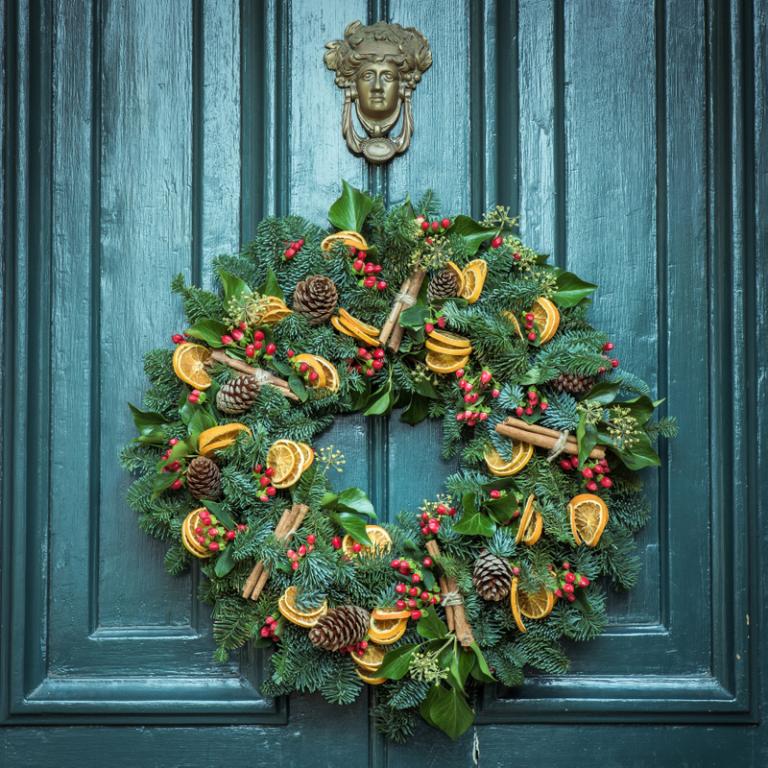 The Yuletide season lasts from the Winter Solstice on December 21st until Candlemas on February 2nd.  The two months after the Winter Solstice, in the calendars of the ancient world were known as “fallow months.”  This period of “no time” allowed for the difference between the lunar calendar and solar calendar.  As the days grew shorter and the dark half of the year reigned symbols of fertility and the much awaited light of spring were brought inside.  Rituals were performed to protect the home and family during the harsh winter months, and to ensure the return of the Sun.  The plants associated with this time of year are representative of new life, longevity and the fiery solar force.  Many of the holiday decorations such as wreaths, boughs, and various ornaments have traditionally been employed throughout the season as charms of protection, prosperity and life force.  The images of many of these plants have become emblematic of the season, and carry with them traditions that have been around for generations.

The vibrant reds and greens of this Yuletide plant show up on all types of holiday décor and can be found in nearly every home this time of year.  Its origins can be traced to pre-Hispanic Mexico where the plant was highly prized by Aztec culture for its use in reducing fevers, and as a dye for textiles.  It has only recently been part of North America holiday imagery.  In the 19th century Joel Roberts Poinsett, the 1st US Ambassador to Mexico, fell in love with the plant and brought it to America.  There is little to no folklore surrounding the magical use of this plant, and has no European history that can be traced.  However, the plant’s quick rise in popularity earns it a position in the list of Yuletide plants.  It could be considered one of the “baneful herbs” of Yuletide since the latex of the plant is capable of causing skin irritation and temporary blindness if it gets in the eyes.  The red color is symbolic of blood and power.  Red is the color of luck in Southern Conjure traditions.  The plant could be employed to manifest wishes, by caring for it and projecting ones desires on to it.  The leaves can then be harvested and dried to carry in a charm bag or burned to release one’s desires to the spirit world. 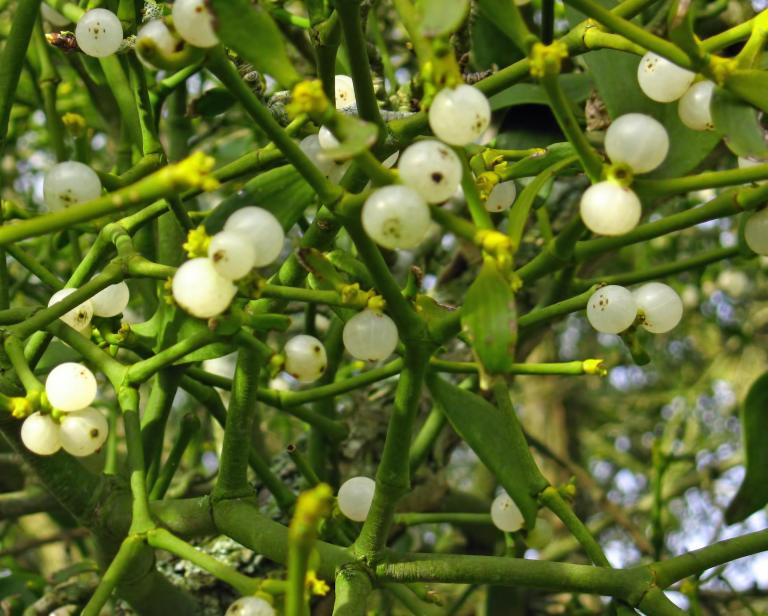 This is another easily recognizable plant that reminds us of this time of year, and has a large collection of folklore that can be traced back to the Old World.  Mistletoe is a parasitic plant of sacred virtue.  Possibly one of the most sacred plants of the Druids, especially when it was found growing in the branches of an Oak.  It grows on a host tree, and was though to spring up via divine intervention.  It was believed that when lighting struck a tree, the Mistletoe would grow from the area that was struck.  The Druids had a special ritual for harvesting Mistletoe using a golden sickle.  The plant was harvested on the sixth night after the new moon following the winter solstice.  A cloth was used to catch the falling plant so that it would not touch the ground and lose its magical virtue.  The Mistletoe occupied a liminal place that was neither above nor below.  The white berries that grow on the plant were symbolic of sperm, exuding a similar white juice when squeezed.  This was thought to be the seed of the gods, and was used as a magical aphrodisiac.  It was associated with love, sex, peace and friendship.  In Norse mythology, Loki used the Mistletoe to kill the god Baldur.  Mourning his death, the goddess Frigga cursed the plant.  Upon his resurrection the negative connotation was reversed.  The white berries that represented her tears were now symbols of life.  It was excluded from Church Christmas decorations because it was so revered by the Druids, and its role in pagan traditions.

The bright red cap and white spots of the Amanita muscaria or Fly Agaric mushroom is unmistakable.  There is legend and lore associating it with ancient visionary traditions used by Siberian shaman, and across Northern Europe and Russia.  There are many theories associated with this fungi and an ancient sacred mushroom cult that may have influenced the development of religion from pre-historic times.  It was thought to have been utilized by shamanic practitioners and lay people for millennia.  Its warming, energizing and inebriating effects would have been utilized during long, cold winter nights.  It also contains high levels of vitamin D, which would have benefitted people living in the areas of the North where sunlight was rare during the winter months.  The brightly colored caps are a frequently depicted motif on holiday décor.  Some theories associated the colors worn by Santa Claus as representative of the Magic Mushroom.  Flying through the night with his magic reindeer, Santa Claus is thought of as a symbolic reference to a shaman on a visionary journey.  The mushrooms typically grow beneath evergreen trees amongst others, and are likened to the gifts left beneath the Christmas tree.  Reindeer were also known to consume these fungi, stimulated by the hallucinogenic effects they would act strangely.  These mushrooms are still used by practitioners today as entheogens, seen as divine gifts used to communicate with the realms of the gods. 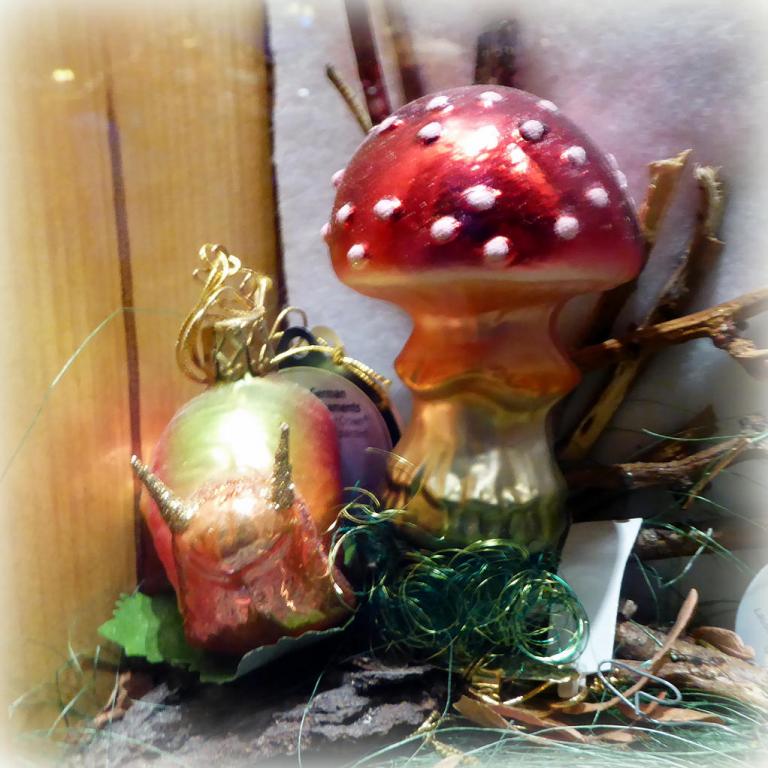 Ivy is a vining, evergreen plant that continues to grow long after its host plant dies.  It is commonly used in garlands along with its more masculine counterpart the Holly.  As an evergreen plant, it represents fertility, growth and new life.  The shoots grow towards the shade in hopes of reaching a vertical structure or tree upon which it can climb to receive sunlight.  This is representative of passing through the darkness of the winter season to reach the new life of spring.  The vining nature of this plant predisposes it to binding and transference magick.  It is woven into protective garlands and wreaths to be placed in the home or on animals.  It can alternately be used to bind protective influences to an object, person or place.

This plant is a symbol of masculine virility with its prickly leaves and bright red berries.  It has a fiery nature that is needed to fight of the cold of the dark half of the year.  It has been used in protective charms to defend against witchcraft and otherworldly creatures.  It was considered bad luck to cut down a Holly tree.  Although, sprigs of the tree were collected and placed in each room of the home for protection during the twelve days of Christmas when spirits roamed the earth.  In the Celtic Ogham it is known as a tree of sacrifice, and in Wiccan Wheel of the Year traditions the Holly King is the dark ruler of the waning half of the year.  He is overcome by the Oak King at the Winter Solstice when the days begin to grow longer.

Another sacred tree of the Yuletide season, it is associated with rebirth, regeneration, healing fertility and fire.  It is used in protective magick, and is associated with various goddesses.  The Birch is the tree of the Celtic tree calendar that follows the month of the Winter Solstice.  It represents the new beginning that arises after the darkest time of the year.  Interestingly Birches are fast growing trees and are the first to grow back, repopulating forests after a fire.  Birch twigs are used in the construction of the witch’s besom as the bristles bound to a staff of Ash wood using strips from the Willow tree.  It is also used in the traditional Yule log burned during this time of year.  Petition spells can be written on the papery bark of the Birch tree, which are then burned in a ritual fire.  Birch twigs were used to light Beltane fires and were used later in the construction of Maypoles.  Birch is a feminine tree, associated with goddesses.  It is sacred to Frigga and Freya.

Yew is an evergreen tree that represents the darker aspects of this time of year.  It is a tree associated with death but also with immortality and longevity.  It is the tree of the Winter Solstice.  The Night of the Yew is the day before the Winter Solstice.  Yew is ruled by Saturn, who is also the planetary ruler of Capricorn, the sign of the Winter Solstice.  It is connected to various dark goddesses, many of whom rule this time of year as well.  Some of the oldest trees are Yew trees, and they were commonly planted in graveyards to stand sentry over the dead.  Ritual tools made of Yew can be used in necromantic divination, and it can be burned as an incense to commune with the shades of the dead, however care must be taken as it is a toxic plant.

When Santa Was A Mushroom (entheology.com) 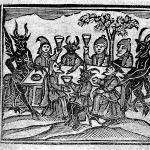 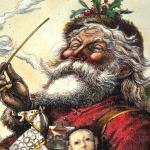