Many Approaches to Protection Magic

Protection magic is quite possibly one of the oldest and most extensive forms of magic.  Every culture throughout history has its protective charms, objects used as talismans and amulets known as apotropaic charms, take many forms.

Superstitions to avert bad luck and negative energy have become ingrained in the human psyche.  Certain taboos like spilt salt, broken mirrors and black cats are rooted in protective practices.

Protection manifests in a number of different ways.  Plants with protective properties display their powers based on their defensive traits, such as: thorns, burrs, poisons and other evolutionary characteristics.

Protective workings can be approached from different directions depending on the need demanded by the circumstances.  They vary from preventative measures, as well as precautions that are more defensive in nature to those that are offensive, for more serious circumstances.

Purification: the removal of harmful/stagnant energies, a kind of magical hygiene meant to prevent the attraction or attachment of all forms of negative energy.

Warding:  A kind of spiritual alarm system that is “set” and “tripped” when activated by undesirable forces and individuals.  Can be programmed to detect specific persons, entities or forces or to act as a general sentry.  These semi-conscious programmed energy forms can be created to serve a specific function, to last indefinitely or to dissipate after a pre-determined period of time.

Divine, Spiritual and Magical Protection: By petitioning protective deities, guardian spirits and familiars to actively patrol and protect a person, place or object, protection can be bestowed in return for regular offerings and requests for the entity’s intervention.  By gaining the protection of a spirit with greater power than the one sent against you, the offending spirit can be commanded to cease and desist.  Hierarchical spirits or those of a contrasting influence can be set against one another, although this requires greater offerings.

A focal point such as an altar, spirit house or statue serve as an anchor for the entity in a particular area.  These spirits can also be tied to the land itself, particular objects or organic matter such as wood or bones.  These objects are the physical representations of the spirit in question, and are treated with reverence.  This is a type of magical agreement that is continually renewed via ritual offerings.

The witch or magician’s own spiritual power may be employed in this way through visualization and willpower to place a protective aura around a person, place or object.  The will of the caster is catalyzed through concentration and ritual, usually some physical representation of the spell such as an object or talisman bearing symbols of protection serving as the focal point.

These forms of protection actively seek out the perpetrator when harm is coming from a specific source, whether known or unknown.  Hexing and cursing can also be considered a form of protection, utilized to neutralize the threat or distract them by creating strife and discord.

The more aggressive forms of protection magic are considered taboo by some practitioners that follow the maxim of “harm none.”  However, there are some situations that call for such drastic measures.

Deflection/Return to Sender:  similar in nature, deflection spells are preventative in the sense that they bounce back negative forces directed at the practitioner before they can hit their target.  Return to Sender spells are done in retaliation to spells that have already been cast.

They combine defensive measures with offensive maneuvers.  When harmful energy, intent, spells or spirits are detected they are returned to their source and sealed with the originator.

Mirror boxes, witch bottles, and witch balls are some of the protective objects kept in or near the home for the effect of protecting from harm and returning it to the sender.

Binding is used to restrict the actions of would-be perpetrators before additional harm can be done by themselves.  Binding can also be used to protect others, and even protect people from themselves.  Through a physical binding with cord, nailing or tying down sympathetic magic is enacted which cuts the target off from their energy, and prevents them from manifesting harm.

Banishing is the forcible removal of harmful forces and malevolent energy or entities, which can then be sealed with the sender or neutralized in some fashion.  Banishing requires the will of the practitioner, who is free of fear and doubt.

There are different levels of banishing depending on the level of severity.  Simple banishing rituals may be performed on a regular basis to remove any unwanted energies as part of one’s regular devotional practice.  By banishing what does not benefit us, we make room for what does. 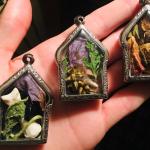 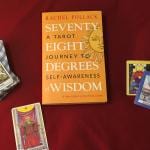 February 23, 2019 Tarot Classic Re-Printed in New Edition
Recent Comments
0 | Leave a Comment
"This is excellent, thanks for giving a thorough examination of the historical philosophy, I often ..."
Tyler Brown The Fairy Lore and the Plant ..."
"Love spells or any type of black amgic ruins people's lives. It is wrong to ..."
Talal Zoabi The Fairy Lore and the Plant ..."
"I agree, poisonous plant and and playing around with any type of witchcraft. https://www.breakblackmagic..."
Talal Zoabi Solanaceae in the Garden of Shadow
"I wouldn't think playing with a poisonous plant is a good thing, though the history ..."
David Brevik Solanaceae in the Garden of Shadow
Browse Our Archives
Follow Us!

Ritual Of Hekate During COVID-19 For...
Keeping Her Keys
Related posts from Poisoner's Apothecary